'Thank Thor for this': Texas GOP congressman brutally mocked for his 'so help me God' bill 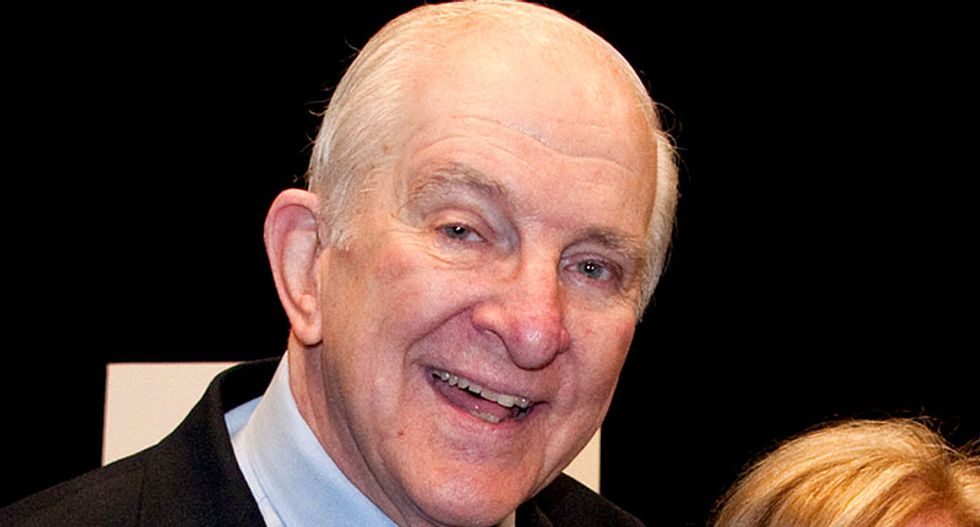 A Republican congressman is the target of an online backlash after claiming that Americans are not entitled to "freedom from religion."

Last week, Rep. Sam Johnson (R-TX) introduced a bill called the Preserve and Protect God in Military Oaths Act of 2015 that would force cadets at the Air Force’s Academy to say “so help me God” during their oaths.

“Our Constitution’s very First Amendment protects every individual’s freedom of religion. But our servicemen and women who protect our county [sic] with their lives are seeing that freedom under fire,” he said in a statement. “Let me be clear: Americans have the freedom of religion – but not freedom from religion."

Mikey Weinstein of the Military Religious Freedom Foundation told the Colorado Springs Independent that Johnson "should be tried for treason and sedition" for proposing such a bill.

"The astounding ignorance and bigotry displayed by his brazen presentation of this proposed wretched sectarian legislation is literally mind-ripping," Weinstein said. "Not only does it viciously savage United States constitutional religious protections afforded all American citizens, including members of the U.S. military, it also provides an unparalleled bonanza of propaganda for our fundamentalist Islamic enemies such as Isis, the Taliban and Al Qaeda. Additionally, it enrages our Islamic allies and utterly desecrates and destroys military unit cohesion, good order, morale and discipline. The United States Congress should at the very least censure this constitutionally derelict villain and universally despicable human being."

"I for one (as another vet) actually love this idea. We could have everyone at the end shout out what god or gods they are swearing to I.E. the Christians could say 'so help me God'. But then the Muslims could yell 'so help me Allah' and the pagans could shout something like "'so help me Thor' or 'Odin!' Hell, we should let them go through the whole damn list while they are at it. Oh and the Satanists, can't forget them! I guess they would yell 'so help me Satan', but yeah... religion! Oh and speaking of, every time someone wants the ten commandments posted on public grounds, we should have the Wiccan three fold law right next to it! This makes it all so simple, don't you see!?" wrote Todd Celtrick.

"I've taken the Oath 4 times. I've never mentioned any God, because I'm an atheist who is a patriot," wrote Mike Pekarek. "This fight you cannot be allowed to win, both for my sake and for my Christian brothers in arms. America cannot have a religious armed forces."

"I am an American veteran," wrote Patrick Restivo. "I took an oath to defend the constitution of this great country from ALL enemies foreign and domestic. You sir are dangerously close to becoming an enemy of the constitution for suggesting that the rights of citizens be violated by trying to impose your narrow religious views on the brave service members who defend us all. We do have freedom FROM religion and if you try to take it away, we WILL fight back. If you want to live in a theocracy then renounce your U.S. citizenship and go join ISIS and be with the rest of your kind, you traitor."