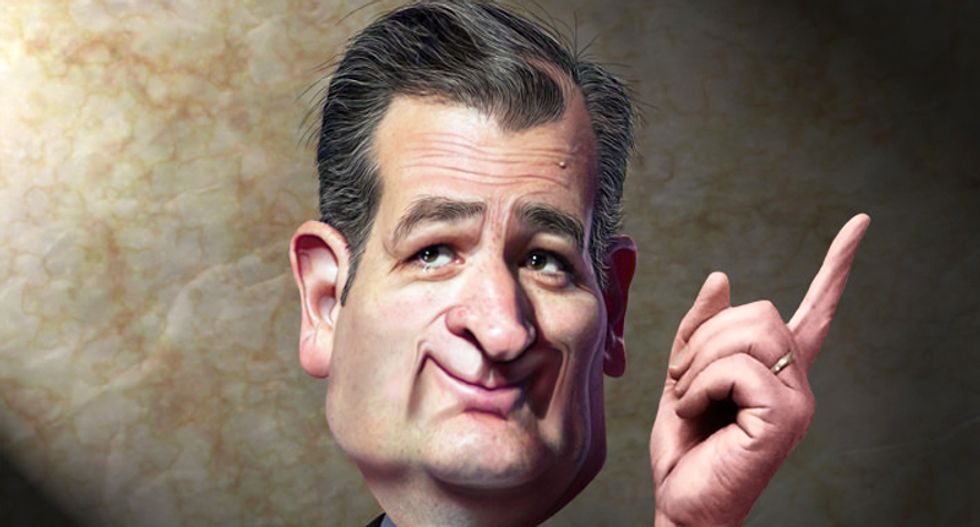 Let us state for the record, on this day and at this time, that Texas Senator Ted Cruz will never ever ever EVER be President of These Here United States of 'Murica.

In a field that will surely be chock full o'nuts, he may be the least appealing nut in the bowl. With the possible exceptions of escaped circus clown Donald Trump and ex-HP CEO  turned feral mean girl Carly Fiorina, there will be no more absurd presidential campaign in 2016, or possibly until the end of life on Earth as we know it.

According to a recent CBS poll,  only 23 percent of Republicans expressed interest in Cruz as president. In fact, the only person who polled lower was the worst thing to hit Louisiana since Katrina, Gov. Bobby Jindal, who has somehow managed to become a worse governor than Sarah Palin.

How is that even possible?  (Hint: she quit and saved the state. Credit where credit is due, I always say.)

Cruz called the NRA-approved "shotgun" and jumped into the front seat of the 2016 GOP clown car on Monday, skipping the traditional exploratory committee phase which probably would have told him, "Forget it, Jake. It's Chinatown -- and you're a Canadian."

All signs seem to indicate that, while Cruz is running, he's not really "running," so much as playing "don't you forget about me" [throws fist in the air as he walks across football field].

Let us count the ways that this Potemkin campaign is a half-assed sham with all of the makings of a bunch of 30's era teens putting on a variety show in the barn.

So what are we to make of this campaign that Ted Cruz has launched?

Since being sworn in on Jan 3, 2013, Cruz's senatorial career has been one of self-promotion and self-aggrandizement.  His only notable achievement was convincing Republican members of the House  -- the children's table at GOP cash-and-grab buffet -- to shut down the U.S. government at a cost to taxpayers of several billion dollars and lost jobs.

With the focus turning to other Republicans like Jeb Bush, Scott Walker, and Rand Paul,  who think they have a shot at the presidency, Cruz is trying to keep his brand alive and not be relegated to his natural position of bomb-throwing back-bencher. Think of all of the times that Sarah Palin and teased that, g-dammit, she just might make another national run when it's obvious she's just trying to keep the grift going before her looks have passed their sell-by date. Cruz is actually launching the threatened Sarah Palin campaign to remain relevant.

Ted Cruz isn't running for President of the United States.