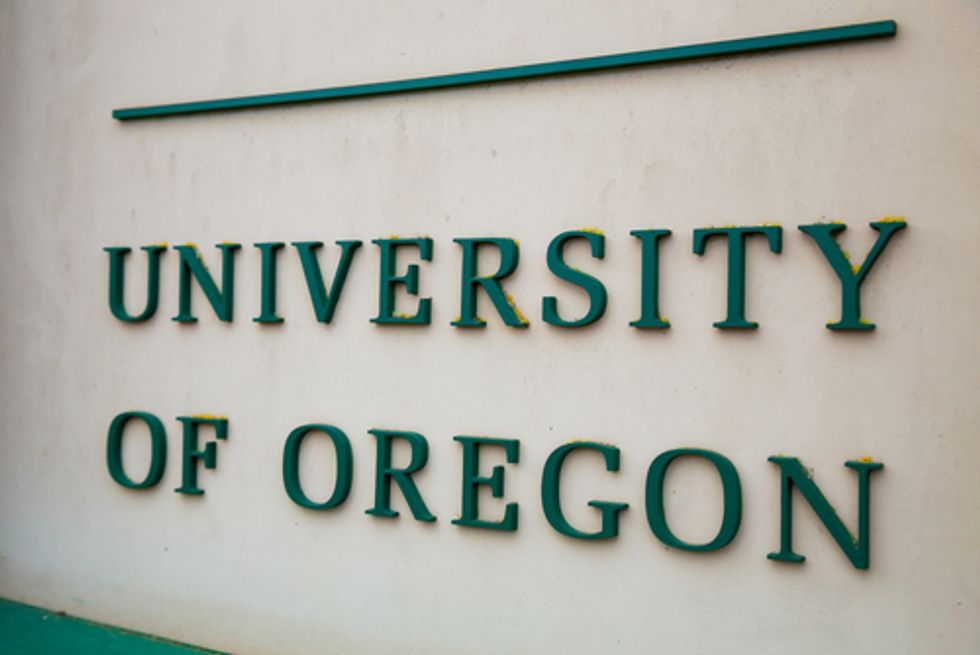 This story has been percolating in the blogs and liberal media for awhile, and now NPR has done a piece on it. A student at the University of Oregon is suing the school because, even though they eventually kicked the players off the team and out of the school, she claims the school took its sweet time over it. The alleged rape happened in March and the discipline was not handed out until May. If you know anything about the college basketball season---and who doesn't, really?---the timing of that feels especially suspicious. She is also alleging that the school knew that one of the players had a history of sexual violence, but the Ducks recruited him as a player anyway.

Sadly, this is all just ordinary news and not a national scandal in and of itself. This story is going viral because the school is being accused of demanding that the student counseling center turn over the student's therapy records to their attorneys so they can defend themselves. From the story:

Two employees at the university's counseling center were also disturbed by the school's actions, and they fired off an open letter to the university community. One of the authors, therapist Jennifer Morlok, said her job was threatened and she felt the school was forcing her to violate her professional ethics.

The university administration would not talk on tape for this story. But in court papers, officials argued that since the student went to the school's health clinic, her health records belong to the school and therefore could be accessed. In addition, they argued that because the woman claimed emotional distress — a medical claim — the school was entitled to her medical records under a federal law known as the Family Educational Rights and Privacy Act.

The Title IX crackdown being orchestrated by the White House and victim advocates is mostly in the media because of titillating he said/she said stories, which generate clicks and controversy because conservatives use them to insinuate most accusers are lying whores. (Obligatory acknowledgement of the Rolling Stone controversy, where there's a strong possibility that an alleged victim was lying, but it is worth noting that she is not, in fact, an accuser, having declined to file an accusation with the university.)  But it's worth noting that the crackdown is about a lot more than that.  The point of Title IX is that it protects women's equal access to education. In order for sexual assault victims to have the educational opportunities they are entitled to, campuses are supposed to provide resources for safety and healing. But by taking this measure, the school shat all over that goal. How are students supposed to feel confident using school-provided counseling, knowing that the school might use what they say in privacy to a counselor against them?

This is particularly frustrating because there's so much pressure on rape victims to be "good" victims. Everything you do or say can and often will be wielded to suggest that either you're lying or you're overreacting. And it's not like there's a consensus agreement out there about what a "good" victim looks like. For instance, if you go right back to dating after a rape, you might be accused of lying because you appear to have gotten over it so fast. But if you turtle up and refuse to date, that could be used to hint that you're just a crazy man-hater.

Or, take for instance, the reaction to this excellent cartoon that Jen Sorensen published about a friend of hers who was raped in college and had to endure, years later, her rapist calling her up to masturbate in her ear in an effort to re-dominate her. Fusion editor Anna Holmes has been getting angry tweets from people demanding that the victim name her rapist. But we all know what would happen if she did, especially as he's a prominent man: She would immediately be accused of lying to destroy this "good" man.  The game is set up so that anything you choose to do will be held against you. Except, of course, not saying anything at all, showing that is society's preferred reaction from rape victims.

With this kind of pressure, victims really need to be able to have a space where they can just be themselves and feel how they feel without having their reactions used to undermine them. But with this move, the University of Oregon is taking even that away from its students. For many victims, not being able to talk to your therapist means not having anyone to talk to. It's important to remember that anything a victim does can be distorted to argue that she's overreacting or lying. So it's not like the factual nature of your victimhood will actually protect you.

The Wall Street Journal editorial board is offering a critical assessment of House Republicans' vote to oust Rep. Liz Cheney (R-Wyo.) from leadership, warning the move will not nix the party's problems ahead of the 2022 primary election.

In fact, the board ward the GOP could face deeper consequences in the long term for its failure to address the real problem: the haunting existence of former President Donald Trump, a political nightmare which the publication describes as Trump's "purgatory."

I don't pay a lot of attention to policy. I don't care enough about the particular details to say with any confidence which one is better and which one is worse. I do care about policy outcomes. So I'd take the so-called public option. I'd take Medicare for All, too. Yes, one is a small step. The other is a big step. Both, however, arrive at the same place eventually, which is universal health care. Either way, I know one party is going to lead us in that direction generally while the other is going to lead us nowhere in a hurry.