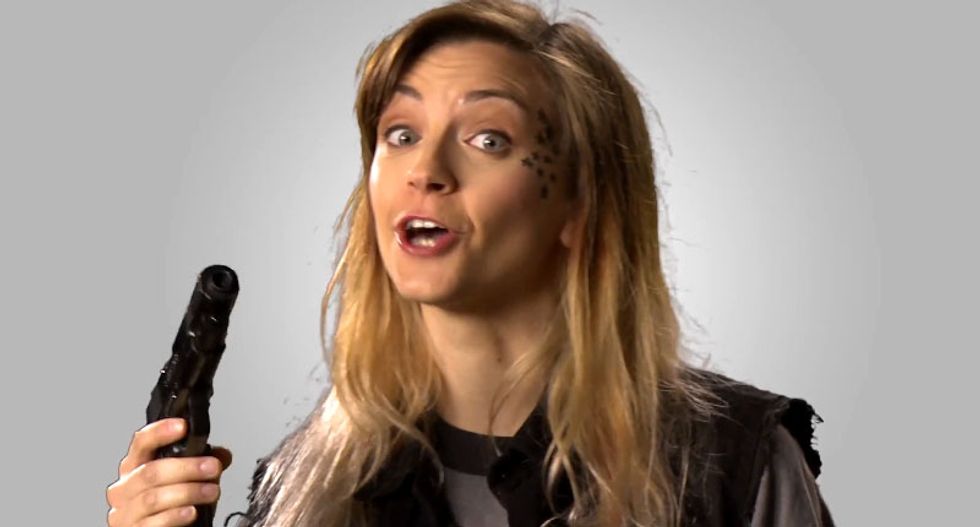 Are you a criminal wanting to buy a gun? Confused about which state offers the laxest laws to help you do so? CrimAdvisor is here to help.

Campaigners against gun violence have turned to parody with a spoof travel tips website in the style of TripAdvisor, giving suggestions for where “felons and fugitives can go to buy, carry and traffic in guns”, and where they should avoid.

The fake website is “promoted” in an accompanying spoof video made by a team at the comedy website Funny or Die, showing two “criminals” boasting about where to go in America to buy guns, which the company created for national lobbying group the Brady Campaign to Prevent Gun Violence.

The Brady campaign’s offbeat tactic is an attempt to breathe new life into a push for gun control that has largely stalled across the country, particularly at the federal level, despite the sense of horror and mourning that followed the Sandy Hook massacre in Connecticut in 2012, where 20 elementary school children and six school staff were gunned down by 20-year-old Adam Lanza.

After a bill to mandate universal background checks on those buying guns ground to a halt in Congress within months of the massacre, gun control advocates have switched their attention to individual states, where there has been more progress in strengthening gun laws.

“The majority of gun laws enacted in America happen in statehouses across the country, not in the halls of Congress, where recent gun control efforts have stalled,” the Brady campaign admitted on Thursday in its annual assessment of the gun law landscape.

It singles out states with the weakest gun laws, and praises states where those laws are stronger, including those where regulations have been tightened since Sandy Hook, such as Connecticut and Colorado, often in the face of strong opposition from the gun rights lobby.

But the campaign’s new approach to naming and shaming is a tongue-in-cheek one.

The Funny or Die video opens with a young woman and a young man facing the camera, dressed in black, sporting tattoos and powerful handguns.

“How would a criminal like me know which states will allow me to carry loaded guns in their amusement parks, golf courses and beaches?” asks the female “crook”, waving her pistol in the air.

The male “crook” boasts: “I have some violent friends. We all wear leather jackets and scream at women. We want to find out in which states we can buy and sell guns easily … I love Arizona – I can visit the Grand Canyon and carry a loaded gun without having to get a background check.”

The two characters protest at the very idea of visiting California or New York, Maryland or Connecticut, where restrictions on guns are the toughest in the country – and direct criminals who want more guidance to “CrimAdvisor.com”.

“This thing would be really funny, if it weren’t so tragically true,” said Dan Gross, president of the Brady Campaign. He said that in some states it is so easy for violent felons to acquire guns that “they have become prime destinations for criminals”.

The campaign names states it want to shame with a “Criminals Choice” award, or a place in the “Traffickers Top Ten”. The lineup includes Louisiana, Virginia, Kentucky, Florida, Arkansas and others, in addition to Arizona and Nevada which are singled out in the Funny or Die video.

The creator of the Funny or Die video weighed into the debate.

“I think most Americans would flip out if they knew just how ridiculously easy it is for criminals to buy and carry guns in some of these states,” said Adam McKay, the writer, director and producer who made the video in conjunction with a Funny or Die team.

The Brady Campaign scorecard ranks all 50 states on a host of gun laws including background checks, regulation of gun dealers and reporting lost or stolen guns.

Only 60% of gun sales in the US include a background check on the purchaser, according to Gross.

The CrimAdvisor spoof site features a colouring similar to TripAdvisor’s and a version of the legitimate travel site’s owl eyes symbol, instead using a pair of gun barrels.

“Welcome to Nevada, a criminal’s best shot at getting a gun, no matter where you are or what you’ve done,” CrimAdvisor declares.

Calling Florida the “Gunshine” state for its lax laws, CrimAdvisor points out that it is starting point of the gun traffickers’ so-called “iron pipeline” to buy guns legally and smuggle them up the east coast along the I-95 to sell in more restricted states such as Delaware, New Jersey, New York or Massachusetts, where it is harder to buy a gun.

Of Connecticut, it warns: “Criminals, stay away! They make it almost impossible for a criminal to get a gun without background check. Go to New Hampshire instead!”

The campaign noted that since 2013, the states of Washington, Colorado, Connecticut, Delaware and New York have expanded background checks to cover all gun sales and Oregon is poised to consider legislation to do likewise.

“It’s an uphill battle against gun violence,” Professor Stephen Teret, of the Johns Hopkins Bloomberg School of Public Health, told the Guardian. “But it’s a battle that’s well worth fighting.”

He pointed out that gun deaths in the US, whether from suicide, homicide or accidental shootings, have been steadily increasing by around 1,000 a year in recent years and currently stand at around 33,000.

This figure is on a par with motor vehicle deaths but these have decreased from a level of more than 50,000 a year in the early 80s.

“President Obama has tried to do as much as could possibly be done, but ultimately we should have Congress addressing this as a major public health problem,” said Teret, who was invited to give expert advice to a panel created by the White House to look at gun control after the Sandy Hook massacre.

“There is slow progress at the level of state government, so at least that is going forward where at the congressional level it’s going nowhere,” he said.

But the legislation has little hope of passing in a Republican-controlled Congress. And Giffords’ visit deteriorated into an online row after the National Rifle Association appeared to mock her statements about background checks in relation to the man who is serving life for almost killing her in a massacre in Tucson, Arizona, in 2011.

Barack Obama, in a speech at a town hall event in South Carolina, blamed easy access to handguns in the US for the fact that “our homicide rates are so much larger than other industrialised countries by, like, a mile”, while lamenting that when it came to stiffer gun control laws at the congressional level “we couldn’t get it done”.

And the Bureau of Alcohol, Tobacco and Firearms announced that it will need further study before it can conclude a review that has been considering whether a certain type of armour-piercing bullet on sale to handgun users in the US – which poses a particular threat to police officers wearing protective vests – is illegal or not.

“Unfortunately, the pro-gun side is so well-organised that what the government mainly heard over these bullets is an avalanche of protest at the prospect of them being banned,” said Teret.