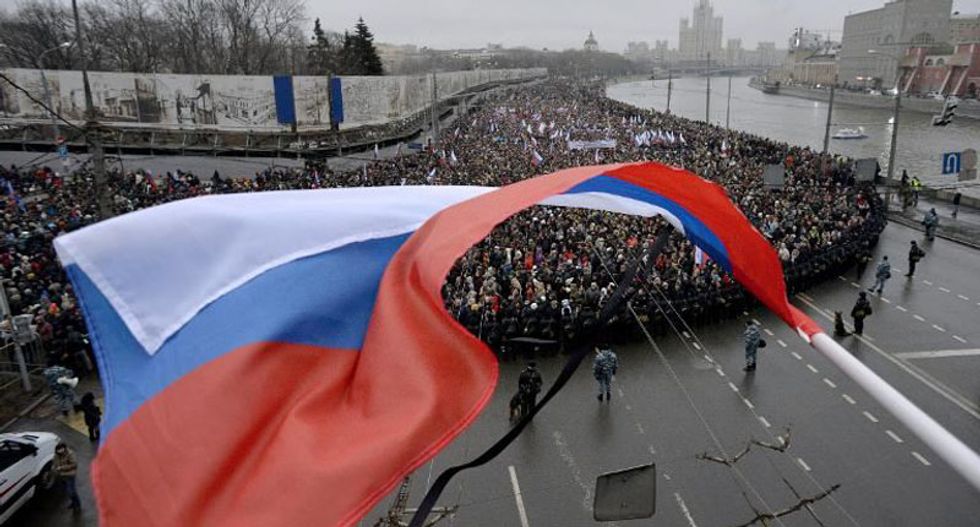 Tens of thousands of people marched in central Moscow for a rally in memory of murdered Kremlin critic Boris Nemtsov, on March 1, 2015 (AFP)

Tens of thousands of people marched in central Moscow on Sunday to honour the memory of opposition leader Boris Nemtsov, who was gunned down near the Kremlin in the highest-profile assassination of Vladimir Putin's rule.

A sea of grim-faced supporters, holding Russian flags and Nemtsov portraits, marched in the drizzle from a packed Moscow square to the bridge over the Moskva where the 55-year-old was shot in the back shortly before midnight Friday.

In what appeared to be the largest opposition gathering since anti-Kremlin rallies in 2011-12 brought more than 100,000 people into the streets, marchers honoured Nemtsov's memory while condemning Moscow's stance on Ukraine.

"These bullets are for each of us," read a huge banner at the head of the march while others stated "I am Boris", "I am not afraid" and "Propaganda kills."

"Stop the war" in Ukraine, said others.

US Secretary of State John Kerry, meanwhile, urged Russia to carry out a "thorough, transparent, real investigation not just (into) who actually fired the shots, but who if anyone may have ordered or instructed this or been behind this".

Around 6,000 people, some wrapped in Ukrainian flags, also turned out in Russia's second city, Saint Petersburg.

"I am carrying a Ukrainian flag because he fought for the end of the Ukraine war. And they killed him because of that," said marcher Vsevolod Nelayev.

Hours before the killing, Nemtsov went on radio to urge Russians to join him at a Sunday rally in Moscow to protest against the Ukraine war and Putin's rule.

After his murder the protest was turned into a memorial march, with authorities approving a turnout of 50,000.

Elsewhere in eastern Europe, Nemtsov too was honoured.

In both Warsaw and Prague, mourners lit candles by his portrait and in Budapest people laid flowers outside the Russian diplomatic mission.

Some 400 people marched in Lithuania's capital, Vilnius, while dozens gathered on Kiev's Independence Square, the focal point of Ukraine's uprising a year ago.

But in a move that worried the Kiev government, Moscow police detained Ukrainian lawmaker Alexei Goncharenko over his alleged involvement in deadly riots in the southern Ukraine city of Odessa last year.

He was later released but his lawyer, Nikolai Polozov, said he would have to appear before an administrative tribunal on Monday and could still be detained again.

Nemtsov, an anti-corruption crusader and vocal critic of the government, was a former deputy premier in the 1990s under Boris Yeltsin.

He died after being hit with four bullets to the back while crossing a bridge a stone's throw from the Kremlin, in sight of the golden domes of Saint Basil's Cathedral. A woman with him was not hurt.

The spot where he fell was heaped with flowers, candles and notes.

Putin on Saturday vowed to punish the killers as Russian opposition figures denounced what they called a "political murder" and Western leaders called for a full probe.

The Investigative Committee, which reports directly to Putin, said Nemtsov "might have been sacrificed" to sow instability, and that they were also checking any links to the Ukraine conflict.

Kremlin critics said the murder of a prominent politician who had held senior government posts marked a watershed moment.

"We have entered a new epoch -- the epoch of the physical liquidation of political opponents of the regime," said prominent commentator Yulia Latynina.

But Putin's spokesman Dmitry Peskov sought to counter talk of the Kremlin toughening efforts to stifle critics. "It would be too emotional and wrong to conclude that a string of such murders has begun," he said

Some Russians blamed the Kremlin for whipping up a climate of anti-Western hysteria and hatred against dissenters that opens the door to acts of violence.

Tensions with the West over Ukraine and the takeover of Crimea have increasingly polarised Russian society, with most Russians behind Putin but a minority in sharp disagreement.

Nemtsov, a hate figure for pro-Kremlin activists, had long complained of being followed and having his phone tapped.

'Bridge between Russia and West'

Gunmen fired at least seven bullets as Nemtsov walked across the bridge accompanied by a young Ukrainian model late Friday.

Footage aired by television shows a man suspected to be the killer running along the road and jumping into a waiting car which then speeds off.

Nemtsov was a former physicist who became governor of the central region of Nizhny Novgorod at 32 before serving in Yeltsin's team in the 1990s.

After leaving parliament in 2003, he led several opposition parties.

A passionate orator with a ready smile and a mop of wavy black hair, Nemtsov was known for his zest for life and popularity with women.

He was a key speaker at rallies against Putin's return to the presidency in 2012 and authored reports critical of corruption and misspending under Putin.

At the time of his death he was believed to be working on a study detailing the presence of Russian troops in Ukraine, a claim the Kremlin still denies.

"The murderers' shot has destroyed it," he said on Facebook.

President Barack Obama condemned the "vicious murder" of the politician he had met on a visit to Moscow.