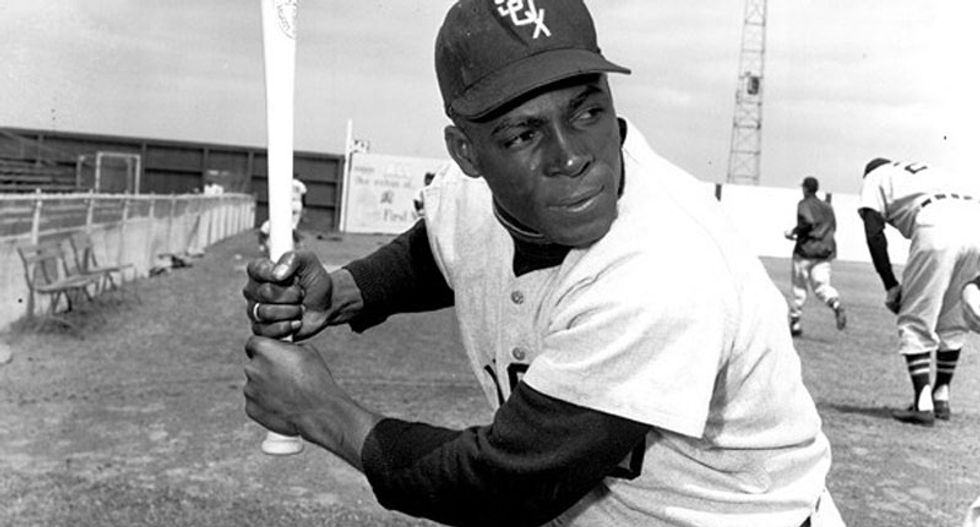 Minnie Minoso, the first black player to play for a Chicago team

Nicknamed the "Cuban Comet," the Chicago White Sox legend was a major figure in the racial integration of Major League Baseball in the 1950s.

Minoso became the first black player on the White Sox when he joined the team in 1951 and went on to become one of its most popular players, nicknamed "Mr. White Sox."

Born in Havana, Cuba, Minoso signed with the Cleveland Indians in 1948, the year after Jackie Robinson first broke the major league's color barrier.

Minoso went on to become a seven-time All Star and played 17 seasons in the majors, including 12 for the White Sox, according to the league.

He was the league's first black Latino star, according to historian Adrian Burgos, who wrote in an article on its website that many considered him the Latin American Jackie Robinson.

Minoso was nominated for the Baseball Hall of Fame as part of an effort to consider overlooked candidates from the league's so-called Golden Era, but he did not get enough votes.

"Minnie may have been passed over by the Baseball Hall of Fame during his lifetime, but for me and for generations of black and Latino young people, Minnie’s quintessentially American story embodies far more than a plaque ever could," U.S. President Barack Obama said in a statement.

Calling himself one of his many fans from Chicago's south side, Obama noted that Minoso endured racial slurs during baseball's integration, and was forced at times to bunk in different motels than his teammates.

"Our organization and our city have suffered a heart-breaking loss today," White Sox chairman Jerry Reinsdorf said in a statement. "We have lost our dear friend and a great man. Many tears are falling."

Minoso's family told the Chicago Tribune that Minoso may have died from a heart condition. An autopsy was scheduled for Sunday.

His age, listed as 90 at the Cook County Medical Examiner's Office, has long been in question, with his year of birth alternatively given as 1922 and 1925.

"When I die, I want to be playing baseball," Minoso once said, according to his biography on the White Sox's website. "Truly. They don't bury me without my uniform."