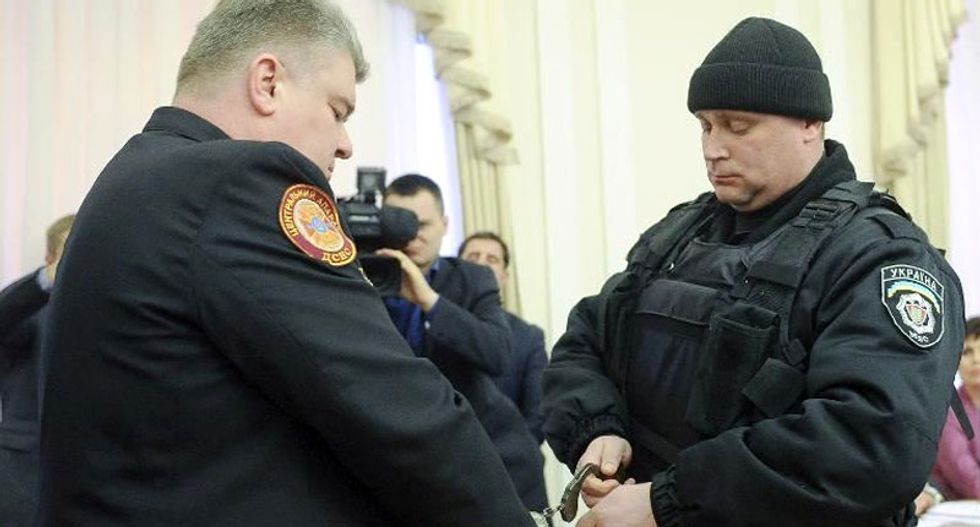 The dramatic shake-up came as the beleaguered authorities, already struggling to combat pro-Russian separatists in the country's east, tried to make good on pledges to tackle rampant graft and curb the influence of the country's powerful business magnates.

Prime Minister Arseniy Yatsenyuk said the sight of handcuffed officials being marched out of a government meeting served as a warning to other officials suspected of graft, with international backers in the West demanding Ukraine stamp out corruption.

"This will happen to everyone who breaks the law and sneers at the Ukrainian state," Yatsenyuk said.

"When the country is at war and when we are counting every penny, they steal from people," he added.

Interior Minister Arsen Avakov said the two men were suspected of overpaying for public procurements from companies including Russian oil giant Lukoil, and channeling the excess funds into offshore accounts.

Overnight, President Petro Poroshenko announced that billionaire Igor Kolomoisky had offered to step down as governor of the key industrial region of Dnipropetrovsk after a dispute over control of the country's largest oil producer ended up with armed men storming the offices of two state-controlled oil firms.

"The president of Ukraine confirmed Igor Kolomoisky's request to resign" at a meeting between the two men in Kiev, the presidency said in a statement.

The banking tycoon was appointed to the post after the ouster of Kremlin-backed president Viktor Yanukovych last year and he has proved a bulwark against the pro-Russian rebellion rocking neighbouring eastern regions.

He funded a powerful volunteer militia group that has played a leading role in fighting the heavily-armed insurgents, even offering a $20,000 reward for any separatists captured and handed to authorities in Dnipropetrovsk.

Kolomoisky's departure has stoked fears that the region's fragile peace could be shattered, but Poroshenko insisted that stability was a priority.

"We have to maintain peace, stability and calm. Dnipropetrovsk must remain a bastion of Ukraine in the east to defend the peace and calm of its citizens," he said in the statement.

Although Kolomoisky, 52, officially resigned, experts believe it was Poroshenko's decision.

The president -- himself a billionaire -- is under pressure from the International Monetary Fund (IMF), which approved a $17.5 billion rescue package for Ukraine's war-battered economy earlier this month, to clean up the country's politics.

The end of Kolomoisky's tenure came after armed men suspected to be working for him barricaded themselves inside the headquarters of the Ukrnafta energy company, before leaving peacefully Tuesday after a tense two-day standoff.

The show of force followed parliament's adoption of a law that increases state control over public companies, weakening Kolomoisky's de-facto grip on the oil producer.

Kolomoisky, famous for having a shark aquarium in his office, has often been accused of using threats of violence to construct his empire, which includes interests in banking, steel, aviation and the media as well as football club Dnipro Dnipropetrovsk.

Fellow oligarch Viktor Pinchuk has even accused him of arranging gangland murders.

But his fearsome reputation has helped repel the rebel threat, according to MP and interior ministry adviser Anton Gerashchenko.

Gerashchenko claimed on Facebook that Kolomoisky took some separatist leaders "for a walk in the woods, where explanatory work was conducted to explain how exactly to love Ukraine. And the separatist threat just vanished."

Highlighting Kolomoisky's influence in the conflict, analyst Volodymyr Fesenko told AFP: "If he wants war, there will be war."