US inequality debate turns to decline of unions 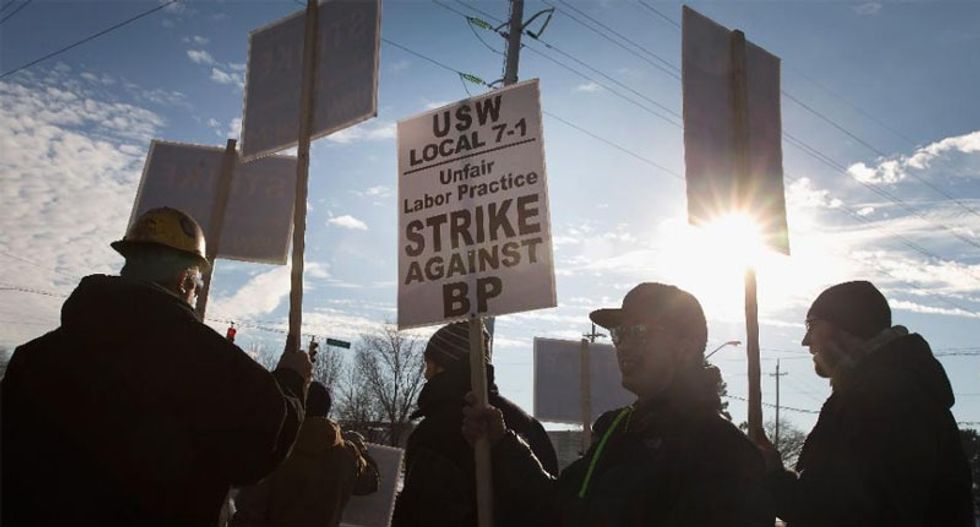 Members of the United Steelworkers Union and other supporting unions picket outside the BP refinery on February 10, 2015 in Whiting, Indiana (AFP Photo/Scott Olson)

The US debate over inequality has turned its focus to an old front: the role labor unions play in boosting incomes of workers.

After decades on the decline, some economists and activists are saying that the lack of organized labor power is an important reason why wages are not rising for middle- and lower-class Americans.

President Barack Obama added fuel to the debate when he denounced on Monday a new law in Wisconsin that weakens the abilities of unions to build support in the workplace.

"It's no coincidence that the rise of the middle class in America coincided in large part with the rise of unions –- workers who organized together for higher wages, better working conditions and the benefits and protections that most workers take for granted today," the president said in a statement.

The Wisconsin law was backed by anti-union Governor Scott Walker, a potential Republican presidential candidate in 2016, who says that union power has undermined American business and hurt workers themselves.

But Obama called it "inexcusable" to undertake "a sustained, coordinated assault on unions" when middle-class families needed stronger incomes.

The United States is not the only place where union power has waned, but the decline has been stronger than elsewhere. Union participation has halved since 1983 to 11.1 percent of the workforce, compared with an average of about 17 percent for the industrialized countries of the Organisation for Economic Co‑operation and Development.

Private-sector unions have been the hardest hit, with only 6.6 percent of the workers at US private companies joining unions, according to the Labor Department.

At the same time, the base salaries of US workers have stagnated, while more wealth has concentrated in the hands of the richest 0.1 percent of Americans, who control now about one-quarter of the country's wealth.

The International Monetary Fund, not known for trade union sympathies, suggests there is a link between the loss of organized labor power and the growth in inequality.

In a recent study, two IMF economists said that the fall in unionization in advanced economies, and its impact on workers' negotiating power, is a "key contributor to the rise of top income shares."

"It's no coincidence that the biggest expansion of the middle class in history happened between the late 1940s and the late 1970s at the golden age of the labor movement," said US labor export Philip Dine, author of the book "State of The Unions".

Since then, the deindustrialization of the US economy, with more workers moving into office and service jobs, has eroded the power of the unions. Many of the new jobs are not protected by limits on hours worked, for instance.

Ben Zipperer, of the Washington Center for Equitable Growth, which studies the inequality problem, notes that in the private sector today "you can be fired for whatever your employer wants you to be fired."

"It's not really the best incitement to join a union," he said.

Weighing on the unions as well are "right to work" laws like Wisconsin's that allow someone to take a job in a unionized company without having to join the union. Half of the 50 states have such laws, which help employers erode the power of existing unions.

Companies are also supported by an industry of consultants who can advise them on how to ward off unions.

Even so, said Dine, "when corporations are more powerful than ever, one can wonder if it's the best time for the average worker to negotiate on his own."

The strengthening of the jobs market and the fall in unemployment in the past year could shift the balance, helping to push up salaries as the labor supply tightens.

Activist pressure on fast-food and retail chains have also had some success: Wal-Mart Stores, the country's largest single private-sector employer, announced last month it would raise wages for a large part of its US staff.

"Workers may indeed have more powers when the labor market is tighter. It presents an opportunity but it won't be enough to reverse a structural trend," said Damon Silvers, director of policy at the AFL-CIO labor confederation.

To reverse this trend, he said, workers need to feel that they have power.

"There's an entire generation for whom the workplace has been the realm of powerlessness."

The leftist Democratic Socialists of America, which helped congressional star Alexandria Ocasio-Cortez get elected in 2018, looks to be a big political player again in New York City's 2021 municipal elections.