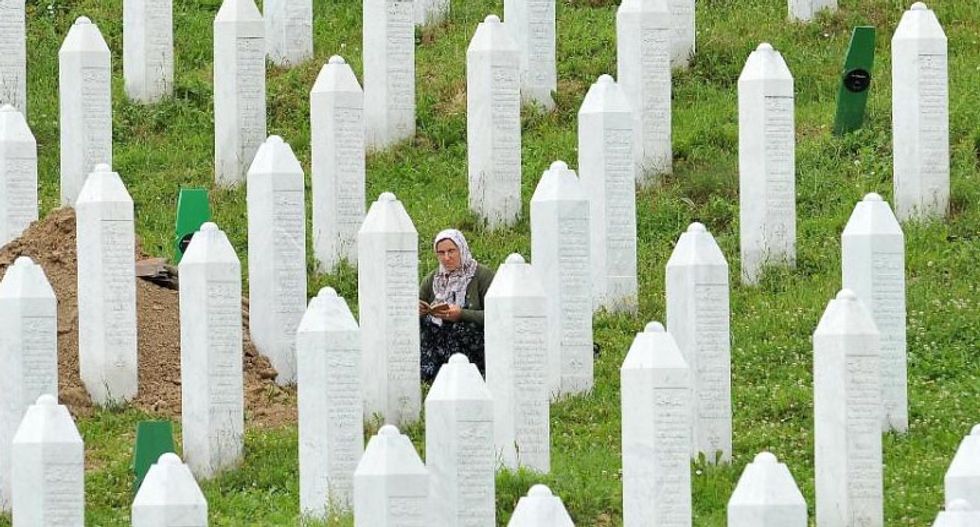 A Bosnian Muslim woman, survivor of the Srebrenica 1995 massacre, searches for remains of her relative at a memorial cemetery in the village of Potocarion near Srebrenica, on July 10, 2014 (AFP Photo/Elvis Barukcic)

The United States is moving to deport at least 150 Bosnians suspected of taking part in war crimes and ethnic cleansing in the former Yugoslavia in the 1990s, the New York Times reported Saturday.

The report said US immigration officials had identified about 300 immigrants believed to have concealed their involvement in wartime atrocities, but the number could eventually top 600.

The accused immigrants include a soccer coach in Virginia, a metal worker in Ohio and four hotel casino workers in Las Vegas, the Times said.

Immigration officials have uncovered evidence that as many as 150 of the Bosnian suspects took part in the 1995 Srebrenica massacre in which about 8,000 Muslim boys and men were killed.

More than 100,000 people were killed in the 1992-95 Bosnian war which followed the breakup of the former Yugoslavia.

"As long as we are alive, war criminals will never be in peace. The fact that investigators will come knock on their door one day is a start," Munira Subasic, head of the Mothers of Srebrenica group, told AFP.

Her association has turned over names of suspected war criminals to US prosecutors.

She said suspects were not just in the United States.

"There are some especially in Canada, Australia, New Zealand, Russia and European countries," Subasic said, adding she had alerted authorities in some of the countries.

The over 120,000 Bosnian refugees who started asking for American visas in the mid-1990s were required to disclose military service or links that would hint at involvement in war crimes.

However, the system counted on applicants being honest and only a minor effort was made to check out their stories.