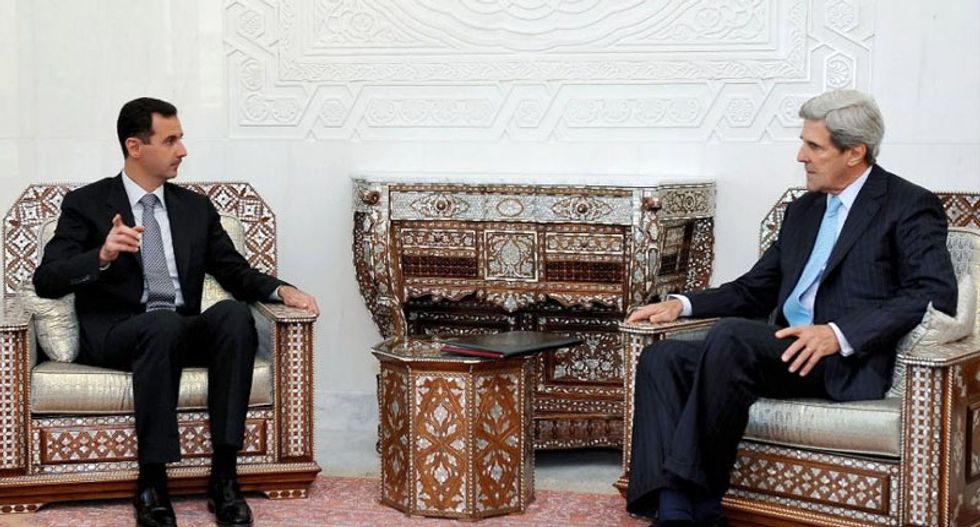 As the devastating war in Syria entered its fifth year Sunday, the US said it would have to negotiate with Syrian President Bashar al-Assad as it seeks to "reignite" new peace talks.

His spokeswoman stressed however there had been no change in US policy as it was envisioned any talks would be held with representatives of the Assad regime rather than directly with the Syrian leader.

"Our policy has not changed -- there is no future for a brutal dictator like Assad in Syria," said Deputy State Department spokeswoman Marie Harf in a statement.

In the past four years, more than 215,000 people have been killed and half of the country's population displaced, prompting human rights groups to accuse the international community of "failing Syria."

Amid the dragging stalemate on the ground, the country has been carved up between government forces, jihadist groups, Kurdish fighters and the remaining non-jihadist rebels.

Kerry acknowledged in the interview aired Sunday increased pressure was needed on Assad to bring the regime back to negotiations which stalled after two rounds last year in Geneva, and "change his calculation about negotiating."

"That's under way right now. And I am convinced that, with the efforts of our allies and others, there will be increased pressure on Assad."

The top US diplomat met earlier this month with Russian Foreign Minister Sergei Lavrov to discuss ways of kick-starting the stalled peace talks.

Russia, a key Assad ally, is floating its own dialogue process, and will host talks in Moscow in April. But it remains unclear if the internationally recognized opposition will attend.

"What we’re pushing for is to get him to come and do that," he replied when asked again if he would negotiate with Assad.

Harf said in a statement that "the only way to bring an end to the suffering of the Syrian people is through a genuine political solution consistent with the Geneva principles."

"By necessity, there has always been a need for representatives of the Assad regime to be a part of this process. It has never been and would not be Assad who would negotiate -- and the secretary was not saying that today."

The conflict began as an anti-government uprising, with protesters taking to the streets on March 15, 2011, inspired by similar revolts in Egypt and Tunisia.

But a fierce government crackdown on the demonstrations prompted a militarization of the uprising and its descent into today's brutal multi-front conflict.

The Syrian Observatory for Human Rights said at least 215,518 people had been killed in the past four years, nearly a third of them civilians and including more than 10,000 children.

The full toll is likely to be even higher, because the fate of tens of thousands of missing people remains unknown.

The UN refugee agency UNHCR says Syria is now "the biggest humanitarian emergency of our era."

Around four million people have fled abroad, with more than a million taking refuge in neighboring Lebanon, while others are sheltered in Jordan and Turkey -- placing a huge strain on those countries.

Inside Syria, more than seven million people have been displaced, and the United Nations says around 60 percent of the population now lives in poverty.

Despite international outrage at the death toll, and allegations that his regime used chemical weapons against its own people in August 2013, Assad has clung to power.

His forces have consolidated their grip on the capital Damascus, where 26 more people were killed in more regime air raids close to the capital Sunday and more than 100 injured, according to the monitor group.

The assaults have been aided by the government's increasing reliance on crude barrel bombs, which Assad denies using despite extensive documentation.

His government has been emboldened by both its military successes and an apparent shift in international rhetoric.

Calls for his resignation have been notably more muted as international attention shifts to the threat posed by the jihadist Islamic State group.

Diplomats describe a new willingness to countenance a role for Assad in Syria's future, although Washington still insists that he has lost all legitimacy and must step down.

"We are working very hard with other interested parties to see if we can reignite a diplomatic outcome," Kerry told CBS News.

Kerry's comments were flashed straight away on Syrian state television.

But international attention has largely shifted away from the war to fighting the Islamic State (IS) group which has captured a large swath of territory in Iraq and Syria, terrorizing the population and carrying out horrific beheadings and murders.

Kerry has said Washington's top priority is defeating IS, and repeatedly blamed Assad for allowing his country to become a magnet for terror groups.

Last year, the United States assembled a coalition of nations to fight the group which has also attracted thousands of foreign fighters, many from the West.