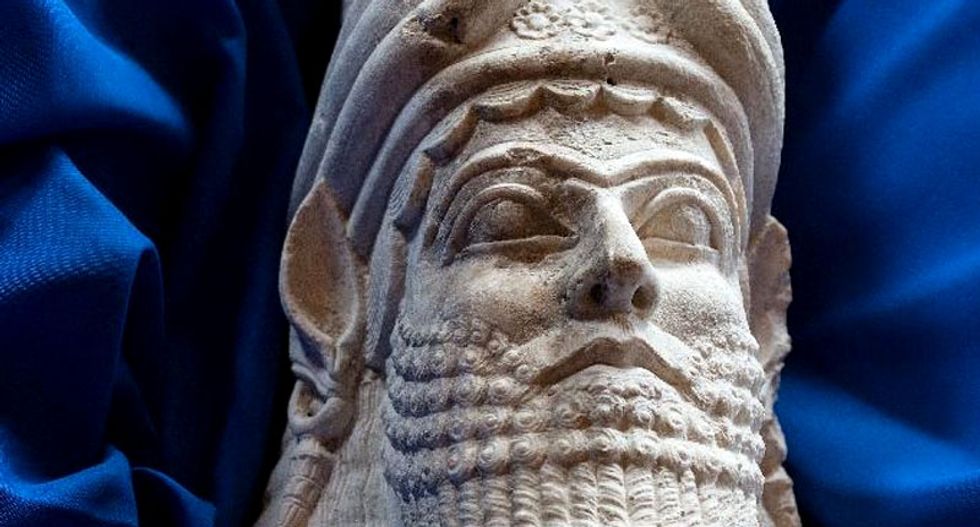 A sculpture of the head of Assyrian King Sargon II is seen during a ceremony to repatriate more than 60 Iraqi cultural items which had been smuggled into the US, at the Iraqi consulate in Washington, DC, on March 16, 2015 (AFP Photo/Nicholas Kamm)

As Iraq struggles to protect its ancient sites and heritage from the Islamic State group, the United States returned some 60 historical items to the country on Monday, many dating to thousands of years ago.

Ancient glass vessels, clay images and bronze spears and axes were on display in Iraq's consulate in the United States as part of the hand over.

The head of an Assyrian lamassu, or winged bull, taken from the palace of Sargon II in northern Iraq, was among the items that are headed back to Iraq's recently reopened national museum in Baghdad.

The head dates to around 700 BC and is valued at up to $2 million dollars.

Sargon's palace is in the province of Nineveh where the Islamic State group (IS) was seen in videos destroying and defacing ancient sites and items, including a winged bull like the one returned Monday.

IS is carrying out a "cultural cleansing" of northern Iraq, according to the United Nations, and selling many of the ancient relics on the black market.

The group holds large swathes of territory in northern Iraq and Syria, and its destruction and "heinous acts" of plunder of ancient culture has added a new "urgency" to US and Iraq operations to return stolen items, Iraqi ambassador Lukman Faily said.

"The whole world is united in preserving that culture."

Despite the destruction and ongoing conflict in northern Iraq, Baghdad reopened the country's national museum for the first time in 12 years earlier this month.

Smugglers will often take years, even a decade, before they put a plundered relic on the black market.

All of the artifacts returned Monday pre-date the IS looting of Iraq, and many items were stolen following the 2003 US-led invasion of the country. US authorities in Iraq were broadly criticized for not adequately protecting Iraqi historical sites.

A number of Saddam Hussein-era objects were returned with the ancient artifacts.

When the items do show up, it can be anywhere from a New York auction house to a Craigslist online posting. One item seized by Maryland-based investigators was taken by a senior civilian employee who worked during the occupation in 2004.

Investigators said since artifacts remain hidden for so long, it takes preparation and discussion with historical experts to be able to identify the items when they do hit the market.

University professors, antiquities groups formed recently by locals concerned about the IS plunder and governments have all made efforts to track damaged and stolen items.

Those experts are a primary source of information for US investigators at the Department of Homeland Security when they try to authenticate possibly stolen goods.

Even then, finding stolen items, many worth millions of dollars and held in private collections, can be a challenge due to a dearth of information.

"The databases are really specific to each country, some are better than others. It takes a long time to get to these sites and catalog or look at the items," said Erin Keegan a Homeland Security investigation leader.

"A lot of times things have not been catalogued yet so it's hard to prove it being stolen other than the country saying 'yes it was,' if they don't have actual records."

But Senior Special Agent Brenton Easter said the government is working to create a database that includes northern Iraq artifacts to get ahead of smugglers working with IS so the US can swoop in when artifacts do come up for sale.

"We have multiple sources out there that we are continuing to cultivate, so we are getting a good handle on the pieces as they are looted before they hit the market," he said.

"We are creating a database where we will be able to identify these pieces when they hit the market five to ten years from now."