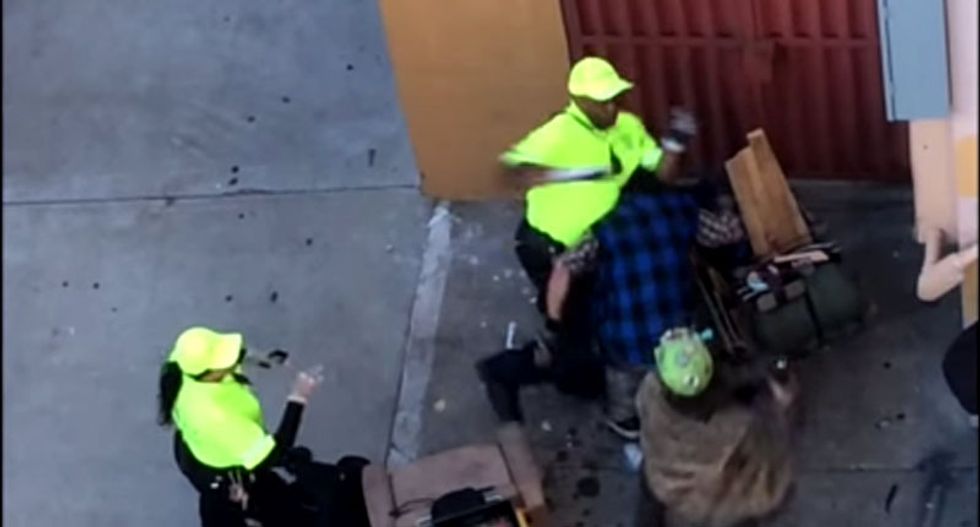 Violent footage emerged on Thursday that appears to show a hospitality ambassador for a Berkeley downtown business association attacking a homeless man, who was blamed for the incident and later charged with a count of misdemeanor battery.

John Caner, CEO of the Downtown Berkeley Association (DBA), which coordinates the ambassador program, apologized on Thursday for the incident, and said the ambassador who appears to punch the homeless man had been fired.

A second hospitality ambassador who failed to intervene has been suspended, pending an investigation, Caner said.

He said the association was “shocked by this totally unacceptable egregious behavior, that runs completely contrary to the extensive training, protocols, and mission of hospitality and outreach of our ambassadors”.

“As CEO of the Downtown Berkeley Association, I want to personally, and on the behalf of the DBA board and staff, apologize to the victim of this beating, and the entire Berkeley community,” he said in a statement.

Caner said the ambassadors reported the incident, as instructed, but that they had said that their actions were taken in “self-defense”.

He said the association was not made aware of the “true nature of the altercation” until the video surfaced on YouTube on Thursday. The incident was first reported by the local news website Berkeleyside .

The incident occurred around 7pm on 20 March in the alleyway behind a CVS drugstore in downtown Berkeley. In the video, two ambassadors, a man and a woman wearing neon green shirts and caps, can be seen rousing two homeless men. One of the men and the male ambassador stand inches apart, arguing . The ambassador appears calm at first, asking the man who is shouting profanities to “stop disrespecting” him.

Then the ambassador leans back and sucker punches the homeless man in the face. The man cowers as the ambassador continues to hit him. Meanwhile, the other ambassador tries to corral the victim’s friend who is waving what appears to be a long stick. “Back up,” she shouts repeatedly, as a dog barks and runs in between them.

By the end of the three-and-a-half-minute video, the incident appears to have de-escalated and the homeless men are gathering their belongings. Then the male ambassador shoves the victim again before the men turn to walk away.

The association’s mission is to “create and sustain a welcoming, vibrant and prosperous city center”, according to its website. The association has long-supported a citywide ban on sitting on the sidewalks. But critics say the measure targets homeless people.

In 2012, Caner said he envisioned the measure being enforced by ambassadors who would “shoo” the homeless away as opposed to Berkeley police. The ambassadors program began in April 2012, though voters rejected the sit-lie ordinance on the November ballot that year.

The victim and another man shown in the video were charged in connection with the incident. Each pleaded no contest to a single count of misdemeanor battery. Alameda County prosecutors said they would review new evidence in the case.

Caner said the association is cooperating with a police investigation. Police said they had notified the district attorney’s office of the video.