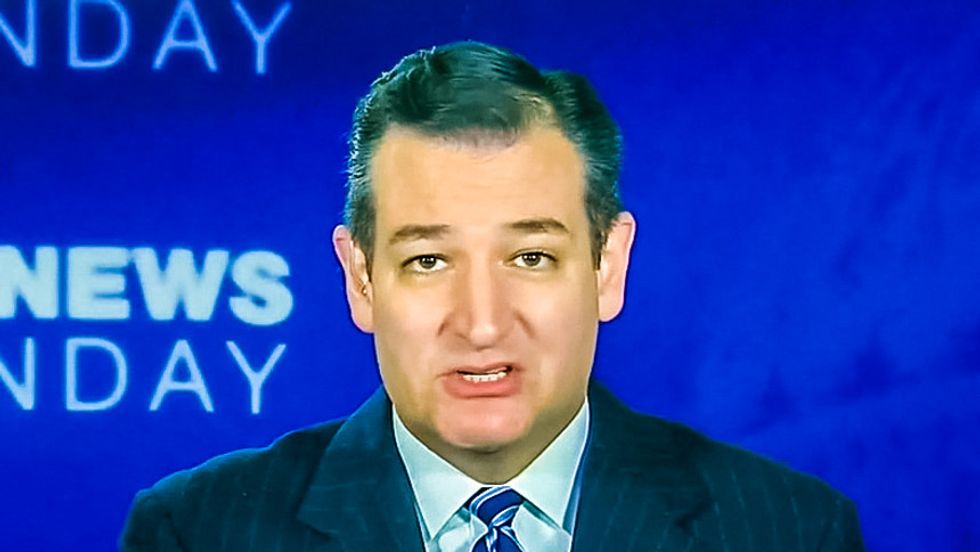 Once reviled by fellow Republicans as a "wacko bird" for leading the US government to a 2013 shutdown, resurgent Senator Ted Cruz has turned his Constitution-above-all conservatism into a Tea Party quest for the White House.

As a freshman in the upper chamber of Congress, the 44-year-old Texas lawmaker -- an intellectual proponent of a grassroots movement that has simmered for years under the Republican mainstream -- has just two years under his belt in Washington.

But in the 2016 presidential race now underway -- Cruz on Monday became the first major candidate to announce he is running -- that outsider status could play well with the right-wing base furious with what he derides as the "mushy middle" GOP establishment unwilling to play hardball against US President Barack Obama.

For Democrats, Cruz is a dangerous demagogue they love to hate, while supporters elevate him as the thinking man's champion of the common folk who came to Washington leading the charge by the ultraconservative Tea Party faction.

He has since become the movement's north star, but critics blast him as a posterboy for Washington gridlock.

Cruz has angered his elders in both parties for showing little deference to seniority and taking over the spotlight from more experienced political stalwarts.

A master orator with a clear sense of mission, he appears to revel in defying the Washington establishment.

He insists the government has wrecked the economy, infringed on religious liberty, put constitutional rights "under assault," overtaxed Americans and sought to take away their guns.

"We know how to fix this. And it's to get Washington to stop screwing it up," he told a conservative event in January.

In September 2013, his conservative star power soared when he spoke for more than 21 hours straight to try to block a stopgap spending bill in the lead-up to a crippling shutdown the following month.

Many fellow Republicans blasted Cruz for convincing Tea Party adherents in the House of Representatives to shut down government in a doomed quest to defund Obama's crowning domestic achievement, the Affordable Care Act.

- From Harvard to the Hill -

Cruz's apparent eagerness to gum up the works of Congress led an exasperated John McCain, the 2008 Republican nominee, to deride Cruz and other Tea Party lawmakers as "wacko birds on the right."

A Texas-raised, Harvard-educated lawyer with a Cuban father and an American mother, Cruz joined former president George W. Bush's legal team to argue the 2000 Florida presidential recount. He later served under Bush in the Justice Department and the US Federal Trade commission.

In 2003 he returned to Texas and was appointed solicitor general, where in five years he argued many times before the US Supreme Court.

In 2012 he ran for Senate with support from the anti-government, anti-tax Tea Party, defeating the establishment Republican and then steamrolling his Democratic opponent in the election.

Cuban-American Cruz may enjoy plenty of support in Hispanic-heavy Texas, but he is a staunch opponent of immigration reform, blasting Obama's efforts last year to shield millions from deportation as "illegal amnesty" and slamming his own party's leaders for failing to defund the measures.

"He's an ideologue," Susan MacManus, a political scientist at the University of South Florida, said after the shutdown battle. "He has a position and doesn't stride from it, doesn't apologize."

For millions of conservatives outside the US capital, Cruz is a hero, and he has done well to fire up the base in preparation for an attempt to win the Republican nomination.

And there is fellow Senator Rand Paul, immensely popular with young libertarian voters and who won last month's straw poll at a major conservative conference. Paul is expected to announce his campaign as early as April 7.

With an abundance of conservatives likely entering the race, will Cruz adhere so far to the right that winning a general election is impossible?

"If Cruz really sticks to this strategy of extremism, he faces very long odds of making it to the White House," Julian Zelizer, history professor at Princeton University, wrote Sunday in a CNN commentary.

Cruz has a secret absent from his official website senate biography: He was born in Calgary, Canada.

As the son of an American, Cruz was entitled to US citizenship at birth. Nevertheless, his foreign birthplace could become a point of contention during his campaign for president, a job restricted to natural-born citizens.

I'm running for President and I hope to earn your support! pic.twitter.com/0UTqaIoytP

A West Virginia Proud Boys leader who has been criminally charged with breaching the US Capitol and engaging in disorderly conduct has requested an additional 30 days to continue discussions with the government, potentially opening the door for a plea deal.

Magistrate Judge G. Michael Harvey granted the joint motion sought by Proud Boys member Jeffery Finley and the US government on Monday, writing that a continuance through May 14 would "provide the parties with additional time to engage in the discovery process and case discussions."