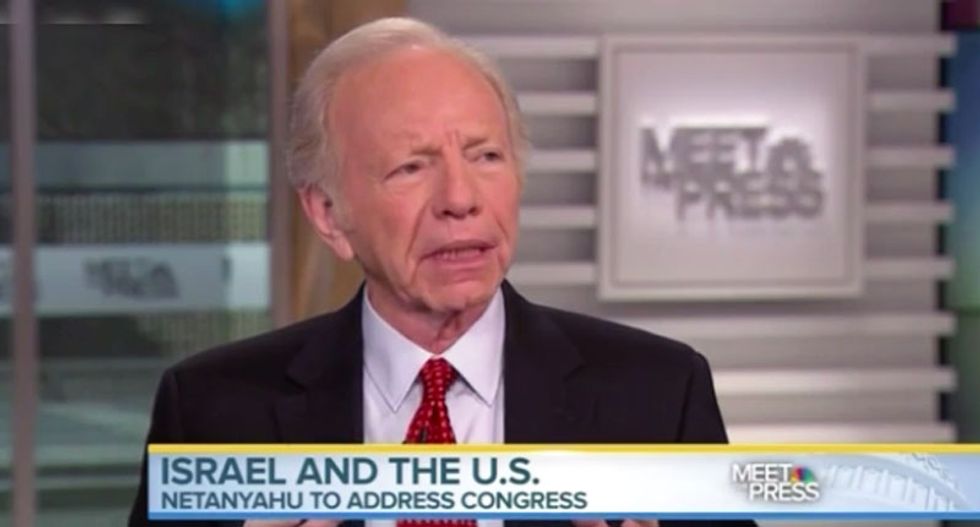 With polls showing voters disapprove of congressional Republicans inviting Israeli Prime Minister Benjamin Netanyahu to address Congress on Tuesday, former senator and Democratic Vice Presidential nominee Joe Lieberman blamed his old party for creating a controversy where he believes there should be none.

In video captured by Crooks & Liars, the  former senator who fail out of favor with his party towards the end of his career, blamed Democrats for making the speech a "partisan" affair.

Admitting that Rep. Jan Schakowsky (D-IL) had a point when she blamed House Speaker John Boehner for inviting the controversial Israeli prime  in an attempt to make the GOP look like  Israel's biggest supporter, Lieberman still found fault with Democrats who have said they will skip the speech.

"I think the best thing for people like Jan, who I respect and I know supports a strong US/Israel relationship - the best thing would have been to go, sit there, it would have been a non-issue and to some extent the Democrats, who are not going are actually making it partisan by their absence." Lieberman explained. "In other words, Jan is right and John Boehner is trying to prove that are better friends than Israel. Then the way to disprove that is for all the Democrats to go."

Lieberman added, "In the end, most Democrats are going to be there Tuesday. I predict that Prime Minister Netanyahu will make a speech that is extremely respectful of President Obama. He will talk about why he is fearful of the negotiations in Iran, allowing Iran to have a nuclear weapon, and by the end of Tuesday it will be over."

Lieberman went on to say that he hoped there would be Congressional bi-partisan legislation put forward afterward, providing Congress with additional oversight, as well as providing for sanctions against Iran, despite the risk of an Obama veto.

Watch the video below, captured by Crook & Liars: