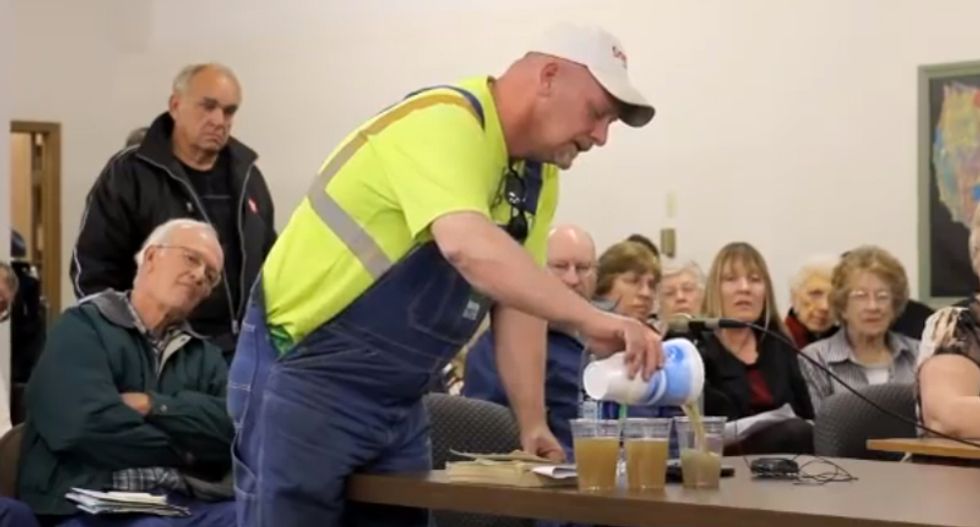 Appearing before a Nebraska Oil & Gas Conservation committee hearing, a local farmer received nothing but silence from the pro-fracking members of the board after he invited them to drink glasses of water tainted by fracking.

In the video, uploaded to YouTube by BoldNebraska, Nebraskan James Osborne used his 3 minutes before the committee to visually explain what fracking waste can do to the water table, dramatically pouring out water containing his own "private mixture" of fracking additives.

The committee is holding public hearings on a proposal by an oil company to ship out-of-state fracking wastewater into Nebraska where it will be dumped into a “disposal well” in Sioux County. According to a report, the Terex Energy Corp wants to truck as much as 10,000 barrels a day of the chemical-laden fracking wastewater to a ranch north of Mitchell, Nebraska for disposal.

Explaining that he has ties to the oil industry and that he is still on the fence about fracking, Osbourne explained fluid dynamics to the board while pouring out three cups of the sludgy water that could result from spills or from seeping into the water table.

Referring to earlier testimony, Osbourne said, “So you told me this morning that you would drink this water,” as he indicated the cups.

“So would you drink it? Yes or no?” he asked, only to be met by silence by the stone-faced group before a member explained they wouldn't be answering any questions.

“Oh, you can’t answer any questions? Well my answer would be 'no.' I don’t want this in the water that will travel entirely across this state in three days,” Osborne said. “There is no doubt there will be contamination. There will be spills.”

Osborne left the glasses on the table before thanking the committee and leaving to applause.

Watch the video below from BoldNebraska: