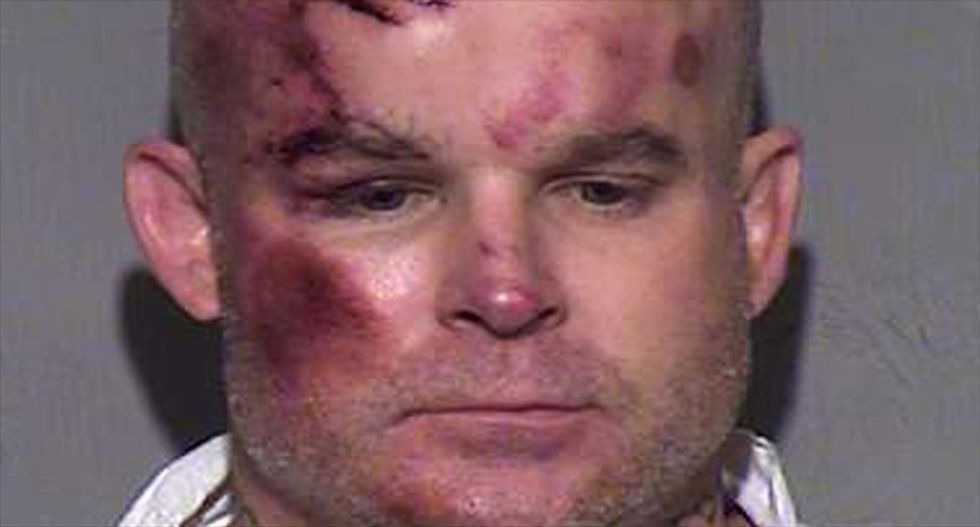 An Arizona ex-convict appeared in court on Thursday accused of killing one person and wounding five others in a shooting rampage that began at a motel in suburban Phoenix and ended with the suspect's capture four hours later.

Ryan Elliott Giroux, 41, who an anti-hate group says has white supremacist ties, is charged with multiple felonies including first- and second-degree murder and is being held without bond for probation violation, authorities said.

Wearing striped jail clothing and shackles, the tattooed Giroux made a brief appearance at Maricopa County Superior Court where he spoke only to confirm his name and date of birth.

He was read the 35 criminal counts he faces, which include aggravated assault with a deadly weapon, armed robbery and kidnapping, by Court Commissioner Sigmund Popko.

Popko told Giroux an attorney had been appointed by the court to represent him, and then set a court date for March 26.

Prosecutors spoke of "the spree of multiple serious offenses with multiple victims" and requested bond be set at $2 million, were Giroux to have been eligible for pretrial release.

A Mesa Police Department SWAT team arrested Giroux on Wednesday after using a stun gun on him in a vacant condominium where he took refuge hours after the initial shooting.

Officers raced to the area after a gunman fired several times with a handgun into a room at the Tri City Inn motel in Mesa, killing David James Williams, 29, as well as wounding Williams' mother, 51, and girlfriend, 19, court documents showed.

The gunman fled the motel, "firing multiple rounds in various directions," the documents said, before shooting and wounding a student while carjacking another person's vehicle outside a nearby restaurant.

He then drove to two apartment complexes, shooting one male victim at each, police said. One of those victims remained in critical condition but was expected to survive, authorities said.

Police said it was unclear what sparked the shooting, and described Giroux as a transient with an extensive criminal background.

Giroux was released from his latest of several stints in state prison in October 2013, after serving six years and three months for attempting to commit aggravated assault, state corrections department records showed.