Why do men win couple fights more than women? Not because they're smarter. 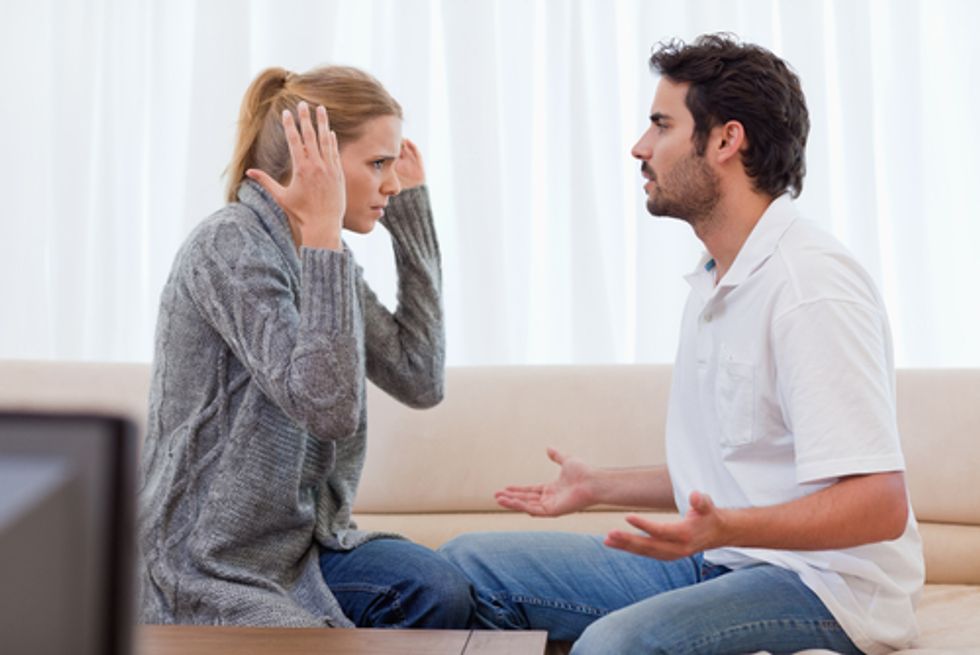 Tracy Moore at Jezebel has a lengthy post responding to a Wall Street Journal piece about how often couples fight because they simply don't remember things the same way. It's a smart and useful piece, because it is true that a lot of conflict between couples---or anyone, really---is arguing over something that's probably unknowable anyway, which is who said what when.* Her post is great and should be read, as 100% percent of people have selective memories and we are all susceptible to being dicks over these kinds of disagreements.

But there was one part where Moore overlooked, I think, how sexism continues to shape these disagreements, even in situations where there is no abuse or men mean well. It's in response to this part of WSJ article:

To which Moore responds:

Men win more arguments? Come again? In what universe? I do not know any men who have won more arguments. Women are ballers on the home arguing front—they have to be, see above. Please, bring these men who win arguments to me for my inspection and scrutiny.

To which I respond: Nothing is less surprising to me than reading that men win more arguments.  Remember, this article isn't about who is right more. After all, the whole point of it is that because, due to faulty memory, that's often unknowable anyway in a he said/she said situation. Winning the argument, then, is about getting the other person to concede to your point of view and/or having things go the way you want them to. In fact, a man winning such an argument is described in the story. Carrie and Joe Aulenbacher were discussing whether or not Joe was going to get an arcade game in the house for his birthday. Carrie was hostile to the idea because it would take up space, but also was open to letting him have this because it was clearly important to him. Anyone who has been in a relationship knows this dynamic inside and out. Then this happened:

"What are these?" she demanded.

"I told you I was picking them up today," he replied.

She asked him why he'd bought two. He said he'd told her he was getting "a package deal." She reminded him they'd measured the den for just one. He stood his ground.

"I believe I told her there was a chance I was going to get two," says Joe Aulenbacher, who is 37 and lives in Erie, Pa.

"It still gets me going to think about it a year later," says Ms. Aulenbacher, 36. "My home is now overrun with two machines I never agreed upon." The couple compromised by putting one game in the den and the other in Mr. Aulenbacher's weight room.

Joe won the argument. Was he right? Did she agree to let him have two machines? I would say probably not. I'm skeptical that someone who is hostile to the idea of one machine would just let it pass her attention that the number of machines on the table has suddenly doubled in size. But he got his way and therefore won the argument.

This is why I think men win more arguments: They pull rank. Even nice, non-abusive men do it. We have all unilaterally taken action like this when, like Joe, we thought we could get away with it. (And yes, I realize people will disagree in comments. And I will disbelieve them, precisely because humans are so good at lying to ourselves.) But men have an advantage in that they can pull rank. Some do it subtly and some are willing to straight up intimidate their partners when they disagree, but I don't know if I've ever seen a man who can, 100% of the time, withstand that urge to win an argument by leaning on thousands of years of social teachings that hold that men are more trustworthy than women.

There was a great piece by Damon Young recently about just this phenomenon:

But you know what I don't really trust? What I've never actually trusted with any women I've been with? Her feelings.

If she approaches me pissed about something, my first reaction is "What's wrong?"

My typical second reaction? Before she even gets the opportunity to tell me what's wrong? "She's probably overreacting."

My typical third reaction? After she expresses what's wrong? "Ok. I hear what you're saying, and I'll help. But whatever you're upset about probably really isn't that serious."

I know I'm not alone. The theme that women's feelings aren't really to be trusted by men drives (an estimated) 72.81 percent of the sitcoms we watch, 31.2 percent of the books we read, and 98.9 percent of the conversations men have with other men about the women in their lives. Basically, women are crazy, and we are not. Although many women seem to be very annoyed by it, it's generally depicted as one of those cute and innocuous differences between the sexes.

I'm not even blaming men for this. Arguments are stressful. Most of us will cut corners trying to win them. Men just have a major advantage. If women had that advantage, they'd take it, too. They just don't have it and so they lose fights more. As long as women are "crazy", men will win more fights. That's because, when things get heated, he can simply invoke his male authority, often by calling her "crazy" or otherwise unilaterally deciding what happened, and what is she going to do? Continue arguing? What's the point? Without evidence to prove otherwise, a man's word simply has more weight. Even if he's wrong.

Of course, pulling rank is a bad idea and should be avoided, which was Young's point. Which is why the advice Moore gives is to focus on feelings and try not to squabble over unknowable facts about who said what. But the other problem is that women are going to be the majority of the audience, by a wide margin, for this kind of thoughtful discussion about how to deal with issues where there's disputes over who said what. Women are already socialized to be the peace-makers, which is another reason men can pull rank, with confidence that a woman's desire to make peace will incline her to just give up arguing. This solution can only work if both people in a relationship try it. So what we need is more men even stopping to think about these things in the first place. The incentive for this is because you love your partner and want to be fair to them. The disincentive is you win fewer arguments. Where men will fall on this spectrum will, I suspect, vary wildly.

*Unfortunately, there is another component to this, which is gas lighting, where abusers deliberately lie about what happened to their victims, in order to make the victim question themselves and to create a relationship "narrative" about how the victim is stupid and should simply submit to the abuser's definition of reality, as the victim cannot be trusted to know anything. It's important to remember that abusers exploit the fact that memory is faulty in just this way, and that some of these cases of disputed memories are not legitimate misrememberings, but an abuser trying to control and dominate his victim. But Moore's piece is addressing non-abusive relationships, in which the "but you said!" and "no I didn't!" fights can happen and be sincere on both sides. Of course, in gas lighting situations, the advice Moore offers---to talk about feelings instead of squabble over the unknowable facts---wouldn't work, as the abuser's point is to force the victim to agree to a memory she knows is not right.