A black guy walks onto the set of 'The Daily Show': The Trevor Noah shoah 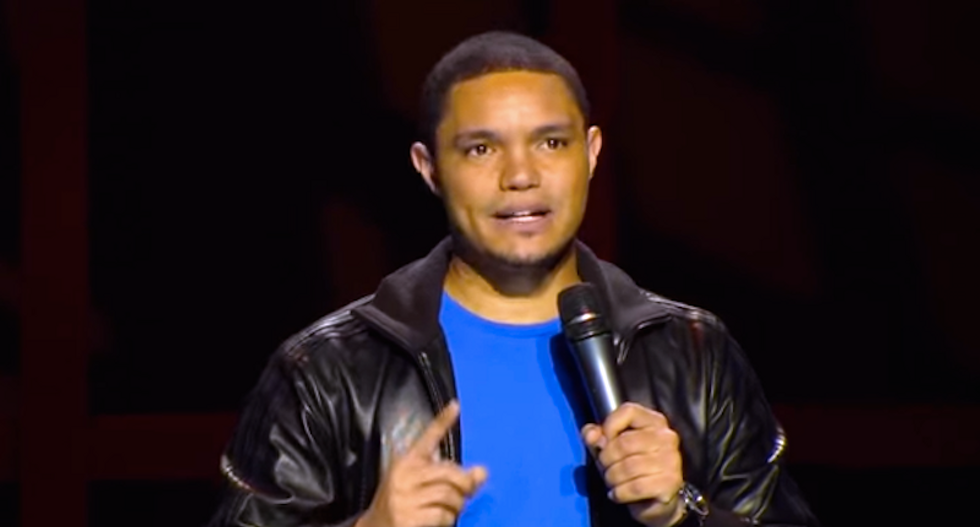 Because we live in a 24-hour chew'em up and spit'em out news-cycle, it shouldn't be completely surprising that "online people who think and say very important things" are horking up gobbets of masticated Mike Pence and moving on to fresh meat for newer hate and outrage clickbait.

The latest item on the menu is 31-year-old South African Trevor Noah who will be taking over for the sainted Jon Stewart on The Daily Show; the sine qua non of liberalism if you are to believe some people. Over the years the relatively unknown Noah has tweeted some jokes that were admittedly ham-handed, dumb, and mildly offensive, which of course means that someone somewhere whose sensitivity scale is calibrated to "princess and the pea on meth' levels is going to shit a kitten.

And do these tweets express genuinely racist and sexist sensibilities that we should be concerned about, or are they just bad jokes — a function of the digital-age comedian being forced to practice in public, with Twitter as his open mic? (All the comics I know arguably have bad, distasteful jokes from when they were starting out that they wouldn’t wanted aired as part of their “Daily Show” audition package.) Is this p.c. culture going into overdrive, or is the deep-rooted ignorance and puerility expressed in some of these tweets a red flag for an (aspiring) political satirist?

The line between funny and offensive is thin. Trevor Noah is on the wrong side. :

Still, these jokes are offensive because they are reflections of cultures that are oppressive and privileged — and rather than being critical of those societal constructions, the jokes instead reinforce them. The jokes imply that it is acceptable — funny, even — to belittle gay, heavy, or Jewish people.

Trevor Noah, From Progressive Icon to Villain in 24 Hours :

In another era, like when Stewart took over TDS, a couple of clunkers about race and gender would have been just that—clunkers. The audience groans, the show moves on. But the show plays a larger role in progressive life and thought than anyone could have expected when Stewart took the job. Just a year ago, Stephen Colbert's show spent days fending off a charge of racism for a joke about Washington Redskins host Dan Snyder that imagined Colbert setting up his own offensively named pro-Asian foundation.

"The guises of 'satire,' 'irony,' and 'humor' are not shields of armor against criticism," wrote Suey Park, a Twitter critic who parlayed the success of a #CancelColbert hashtag into a guest column for Time magazine. "These white liberals are not mad that we pointed out racism, they are mad that they now have to consider the ways in which they may be racist."

I'll pause here for a moment to remind everyone that Suey Park is a self-promoting babbler who mistakes being obtuse for great depth.

Continuing on, Daily Caller Senior Editor Jamie Weinstein worries that some of Noah's tweets  "seem to suggest that Noah believes Israel is an inherently belligerent country,  a view not often associated with those who have positive feelings for Israel."  But since Weinstein works for a paycheck from these guys, his concerns and opinions on just about anything, including "paper or plastic," doesn't count for jack.

So what are we to make of this comic-fail Katrina, other than "content" swaddled in outrage du jour?

Part of it is that continual discussions on what constitutes "the funny" by people whose job it is to overthink America's minor ills is such a crashing waste of time. While scientists are still trying to figure out what makes something funny, the simple answer is that, like Potter Stewart's pornography, we each individually know it when we see it.

I get that we are supposed to have opinions on everything-- or else why have Twitter -- but sometimes a joke is a just joke, or, as Stephen King once said: “Sometimes a cigar is just a smoke and a story's just a story.”

Noah's jokes aren't the Holocaust -- and I'm sure by now someone is upset that I used 'shoah" in the headline because that is how the Internet rolls -- and endless discussions by well-meaning people who argue that humor and comedy exist as tools for the greater social welfare ... well, they're doing it wrong. I read a discussion on one of the culture sites recently where two authors were expressing their dismay that Jane Krakowski's character -- who is supposed to be a Native American woman passing as a white Upper East Side WASP on "The Unbreakable Kimmy Schmidt" --  should have been given to a real Native American actress.

Yes, there are actually people who are paid to write about culture and comedy who think that is a "hot take" that should be given serious consideration in the pursuit of laughs.

Here is the deal with Noah and the Daily Show:

The Daily Show under Noah will not be the Daily Show that it was under Jon Stewart, which was not the Daily Show that it was under Craig Kilborn. Shows and writers adapt to the skills of the star of the show, and develop material that plays to their strengths. Just as the relatively anodyne Tonight Show under Johnny Carson became the lunk-headed lowest-common-denominator lounge act that was Jay Leno, only to become the smirking kid putting on a painfully unfunny skit show for the neighbors starring Jimmy Fallon.

Noah made some bad jokes on Twitter, so lock up everybody in America with a Twitter account.  But, holy shit people, just because your favorite comedian didn't land the gig-- and few name comedians wanted the daily gruel except for Chelsea Handler and nobody wants her -- doesn't mean Noah should be crucified for bad think.

Far right conservatives are going to go after Noah because he's black and from Africa -- just like our president -- and because they assume that the Daily Show is going to more libtard destruction of 'Murica.  And the far left is mad because he has, so far, failed to pass their litmus test for humor by being painfully unfunny --although some of those tweets seem to indicate he gave it his best shot. Noah will have writers just like Jon Stewart, Stephen Colbert, John Oliver, and Bill Maher do. Things will be fine.  Your epistemic closure bubble will most likely remain intact, you will find your bliss,  and unicorns will once again roam the landscape pooping rainbows.

Until someone else comes along and says a dumb thing.

Then, it's kitten shittin' time all over again.