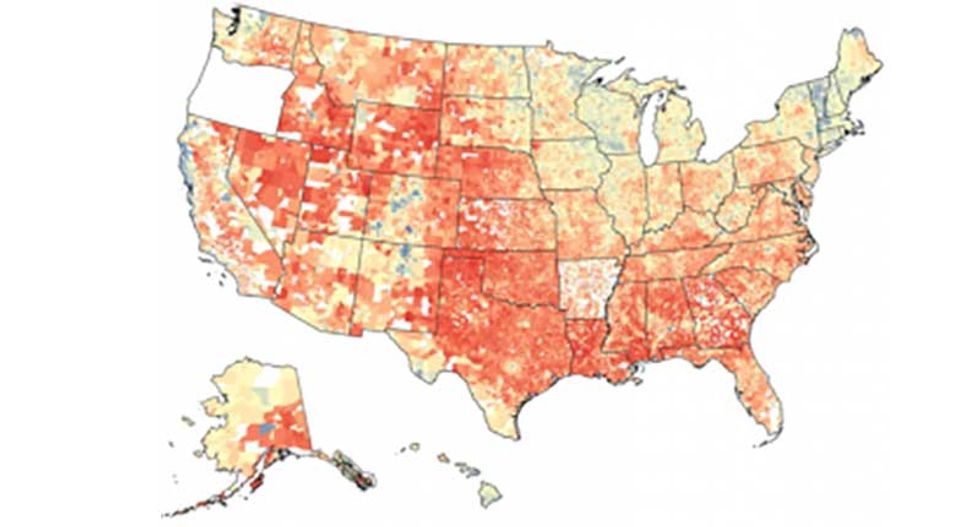 It’s no surprise that race is still a big factor in American voting patterns, but there’s new detailed evidence that traces how the election of Barack Obama in 2008 broke down along racial lines in some surprising ways.

“Given consecutive elections of Barack Obama to the office of the presidency, it may be tempting to believe that the problems of the civil rights era have passed, yet voters in the United States continue to be divided along racial lines,” wrote the University of Florida’s Brian Amos and Michael P. McDonald in a new paper that looked at results in every precinct in America.

“The success of President Obama’s candidacy within predominantly White states such as Colorado, Indiana, Ohio, and New Hampshire indicates clearly that racially polarized voting was not found everywhere,” they said. “Despite Obama’s victory in some majority-White states, evidence suggests racial voting was present in the 2008 election.”

As you might expect, Whites living in the South and rural areas between the coasts were least likely to vote for Obama. But even in deep red dstates, there were blue pockets.

“There exists wide variation in White voting patterns at finer levels of geography; while Blacks and most Hispanic nationalities showed strong support for Obama across the nation, Whites in the South were less likely to support him than those elsewhere,” they said. “Going a step further, southern Whites are not a monolith, with differences in support between their rural and urban subgroups. The state of racial polarization in the United States cannot be distilled down to a soundbite, but instead is a complex geographic mosaic.”

The researchers looked at results in 183,783 of the nation’s precincts—every state except Oregon because it votes by mail—to get a detailed look at racial voting patterns. The study included “first looks at the voting behavior of races and Hispanic nationalities that normally make up too small a proportion of the nation to report.”

Latinos largely supported Obama with the exception of Cubans, they found.

“It’s clear that Obama had broad support across all nationalities except for Cuban Americans,” they said. “The behavior of Cubans was expected – the lowest levels of support are in southern and urban precincts, which coincide with the conventional wisdom about Florida Cubans. Puerto Ricans and Dominicans had especially high levels of support, similar to Blacks (Dominicans are, of course, Black Hispanics). These estimates may thus appear to be overstated; however, in majority-Puerto Rican and majority-Dominican precincts Obama won 91.4% and 94.4% of the vote, respectively, confirming the estimates.”

A close look also found that Obama had higher levels of support than what Election Day media exit polls reported in 2008.

“Our national estimate for Asian Americans, 81.4%, is quite a bit higher than other studies have reported; exit polls recorded just 62%," they said. "The shift in partisan support among Asians over the past two decades has been quite pronounced, moving from Clinton receiving 36% of the two-party Asian vote in 1992 to Obama receiving 73% in 2012. Our estimates may be higher than reality, but it’s clear that Asian Americans have become a strong Democratic bloc in recent years.”

The reserachers also found that Obama’s support amomg Native Americans was “67.2% and Pacific Islander support [was] at 69.1%. Less has been written about these two groups, although in examining results from Native American reservations, strong support for Obama was expected. Furthermore, the Hawaiian/Pacific Islander vote is roughly in line with the statewide vote in Hawaii, which suggests that the estimates are realistic.”

When it comes to Whites living outside the coastal blue states, what emerged was a country that’s a sparsely populated sea of "red and orange" peppered with "blue pockets."

“The urban/rural difference is immediately obvious, especially in the South,” they said. “Additionally, it’s clear that the strong support for [Republican nominee] John McCain among whites was not limited to the South, but also extended from the Great Plains westward, almost all the way to the west coast. The difference in shade between the states in these regions versus other predominantly- White states like Wisconsin, Minnesota, and Iowa makes it clear why the former group was largely written off by Democrats as unwinnable, while the latter group was a battleground in 2008.”

But the researchers also found that support for Obama in red state cities was an indication that the political culture was changing.

There is “a new understanding of demographic trends in the South: southern states with large urban centers, such as Georgia, North Carolina, and Virginia, have recently been moving back in the Democratic direction,” they said. “This pattern is not only a consequence of minority in-migration and their differing support levels than Whites for Democrats, but also differing patterns among urban and rural Whites within these states.”

This study is one more piece of evidence that race still plays a large factor in American elections and voting, even as the Supreme Court’s right-wing majority has gutted major voting rights laws that were intended to enfranchise minorities—and said that the U.S. is in a post-racial era where affirmative actions are outdated.