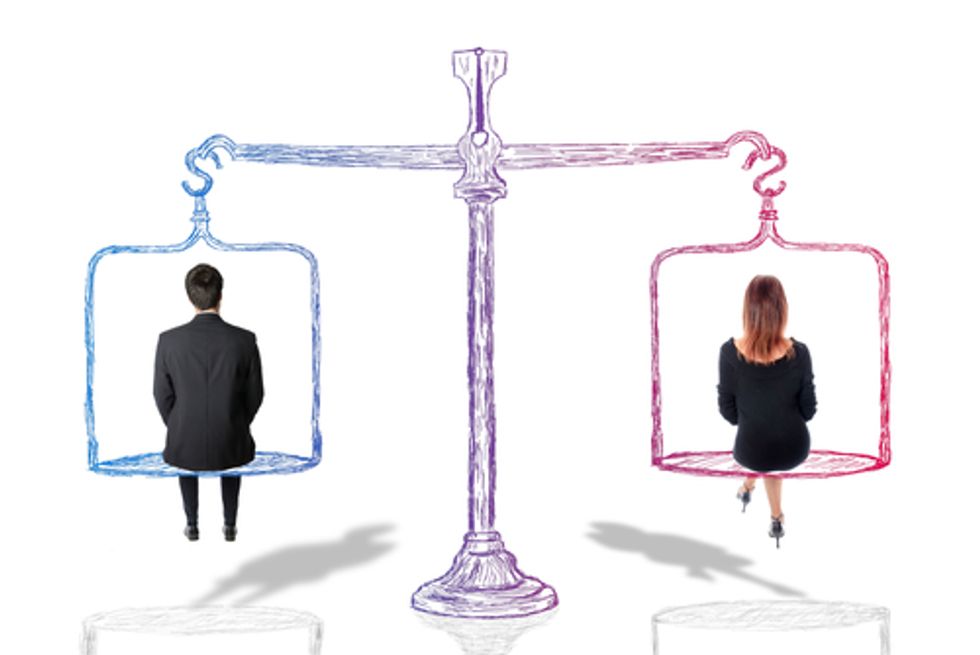 Vox has been publishing a bunch of polls they've conducted recently, and I was particularly intrigued by this one that shows a disconnect between what people say they believe and how they self-identify:

The poll, conducted by research and communications firm PerryUndem, shows that a strong majority of Americans agree on gender equality. Eighty-five percent, for example, say they believe in "equality for women."

But many fewer want to put the feminist label on their beliefs. Eighteen percent of poll respondents said they consider themselves feminist. Fifty-two percent said they were not feminist, 26 percent were not sure, and 4 percent refused to answer the question.

The sample was a little over 1,000 adults, nationwide. We've seen similar polling data in the past, so this seems to be a pretty accurate assessment. This sort of thing frustrates the fuck out of feminists, because, by definition, if you believe in gender equality, you're a feminist. So why is there this disconnect?

One big theory is that a lot of people are, in fact, feminists, but they don't know it, because they've been scared off by negative stereotypes about feminists promulgated by opponents of women's equality. Call it the "I'm not a feminist, but" phenomenon and it's certainly a big factor, but I don't think it fully explains the situation. Another huge chunk of it is likely due to the American fetishization of individualism, which leads a lot of people to shun labels in an effort to show what special snowflakes they are.* This is why, for instance, a lot of people who self-identify as "independents" are actually consistent Republicans or Democrats. There's also some truly feminist men who avoid the label, because they don't want to be mistaken for one of those creepers who calls himself a feminist to get female attention and cookies, but who is secretly a pig to women.

Those three factors account for a lot of this, but I think there's a third factor: A lot of people who say they are for gender equality are not, in fact, for gender equality. This is a common problem with polling. Most people want to look good, and so will agree they are for gender equality because that sounds good, not because they actually believe it. But a lot of them are saying it with a whole shitload of caveats. For instance, they may be defining "equality" so that it means something that is not equality. Like this guy, for instance: Goes off on a lengthy rant about how men are natural leaders and being a man is the best because men are the best and blah blah, but then says he's not saying men are better, even though that is quite clearly what he is saying.  I guarantee his justification for that is some variation on the "both genders have different, but complementary roles, and so it's a kind of equality". It relies on saying being the follower is equal to being the boss, a bit of doublethink that justifies being a sexist while claiming you are not.

Which is why I put more stock in whether or not someone self-identifies as a feminist than if they make bland declarations of non-sexism. With the full understanding that some people might need more education or might be nice guys who just prefer to identify as allies aside, if I see someone actually recoiling from the word, at least three-quarters of the time, it's because they're straight up sexist. Even if they won't admit it.

Since it's Friday, enjoy one of my favorite songs mocking this exact issue.

*This is a major pet peeve of mine. The irony is that there is nothing more basic than snootily declaring that you are above labels. In my long experience with this, I've learned that nothing tells you that someone is a boring, unoriginal person quicker than having that person declare that they can't be fit into boxes. It's actually hilariously counterproductive to the obvious goal of being perceived as a special snowflake. Genuinely interesting people realize that labels aren't boxes, they're descriptors. How can you be an actually interesting person if you shun all descriptors? That's like calling clear a color.