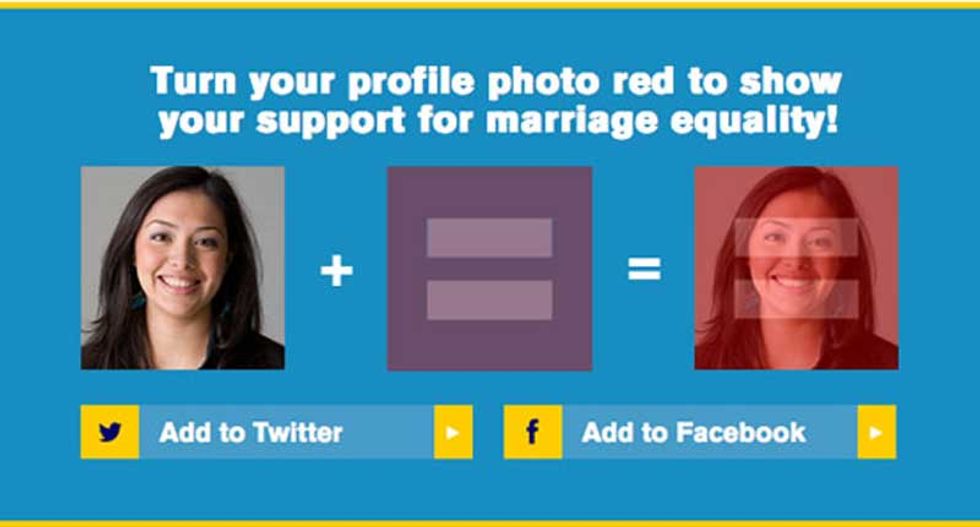 With a week until the Supreme Court hears oral arguments in a crucial case involving same-sex marriage, the activist group the Human Rights Campaign is pushing to paint Internet social circles red.

The group announced on Tuesday that it wants to get 500,000 Facebook users to turn their profile pictures red in the days leading up to April 28, when the high court hears arguments in the case of Obergefell v. Hodges. The HRC released a tool that can be used to feature a red equal sign on profile pictures for both Facebook and Twitter users.

According to the HRC, a similar campaign in 2013 attracted enough attention to get 10 million social media users to use the symbol on their profiles in the days leading up to the court's rulings that struck down both the Defense of Marriage Act (DOMA) and California's state ban on same-sex marriages.

"For a long time, when people stood up for a cause and weren't all physically standing shoulder to shoulder, the size of their impact wasn't immediately apparent," Facebook data researcher Eytan Bakshy said at the time. "But today we can see the spread of an idea online in greater detail than ever before. That's data well worth finding."

The case is a consolidation of similar lawsuits in Kentucky, Michigan, Ohio, and Tennessee and involves 12 couples and two widowers. It was named after James Obergefell, the plaintiff in the Ohio suit, who is arguing that the state's refusal to recognize out-of-state same-sex marriages violates the 14th Amendment. Obergefell married longtime partner John Arthur in Maryland shortly after the high court ruled that DOMA was unconstitutional.

Arthur died three months after a district judge ruled that Obergefell had the right to be listed as his surviving spouse on his death certificate.