Activist smacks down Wolf Blitzer: 'You are suggesting broken windows are worse than broken spines' 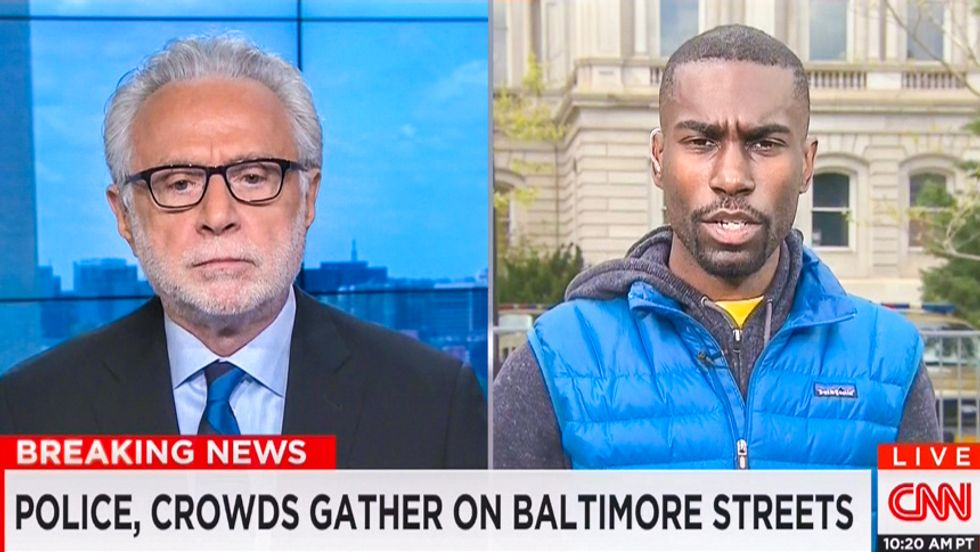 CNN host Wolf Blitzer seemed determined to make the focus of his Tuesday interview with Deray McKesson about the amount of trouble protesters had caused in Baltimore, but the community organizer managed to turn the tables on the veteran journalist.

McKesson agreed that the property damage in Baltimore on Monday night was unfortunate, but he urged Blitzer to remember that there had been "many days of peaceful protests here in Baltimore City and places all around the country."

"But at least 15 police officers have been hurt, 200 arrests, 144 vehicle fires -- these are statistics," Blitzer countered, robotically reading a police press release. "There's no excuse for that kind of violence, right?"

"Yeah, and there's no excuse for the seven people that the Baltimore City Police Department has killed in the last year either, right?" McKesson shot back.

"We're not making comparisons," Blitzer stuttered. "Obviously, we don't want anybody hurt. But I just want to hear you say that there should be peaceful protests, not violent protests in the tradition of Dr. Martin Luther King."

"Yeah, there's should be peaceful protests," the community organizer replied. "And I don't have to condone it to understand it, right? The pain that people feel is real."

"And you are making a comparison," McKesson added. "You are suggesting this idea that broken windows are worse than broken spines, right?"

"And what we know to be true is the police are killing people everywhere. They're killing people here. Six police officers were involved in the killing of Freddie Gray, and we're looking for justice there. And that's real. The violence the police have been inflicting on communities of color has been sustained and deep."