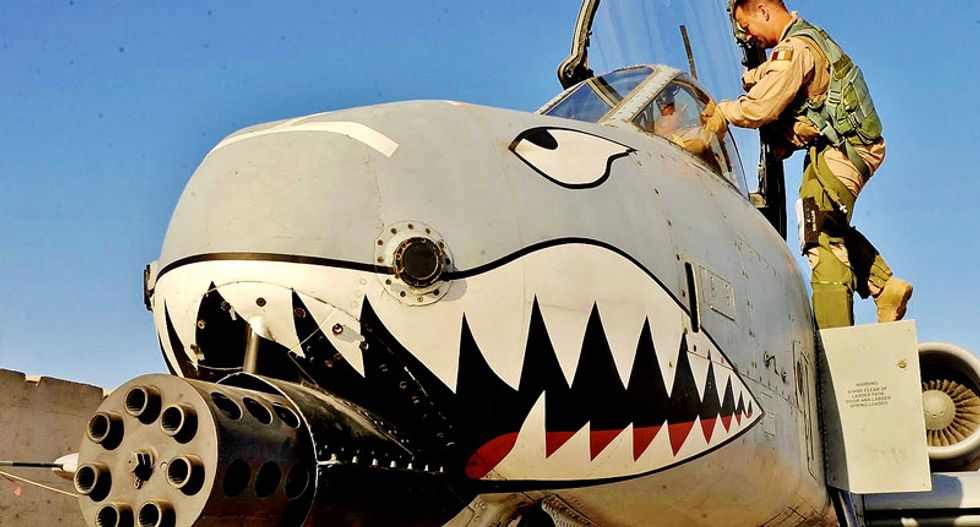 A pilot entering an A-10 Warthog aircraft (Greg Bishop/Flickr)

An Air Force major general has been formally reprimanded and removed from his job for telling a group of officers that talking to Congress in a bid to block retirement of the A-10 Warthog amounted to "treason," the Air Force said on Friday.

An investigation of remarks by Major General James Post III, who was the vice commander of Air Combat Command, found that his words to some 300 airmen at Nellis Air Force Base on Jan. 10 may have had a "chilling effect" on some of them, convincing them not to speak with lawmakers.

The incident added fuel to a controversy over efforts to retire the low-flying, tank-killer aircraft, which is highly regarded by ground troops for its ability to provide close air support.

The plane has strong supporters among members of Congress who have so far successfully blocked efforts to retire it.

Air Force Chief of Staff General Mark Welsh, himself a former A-10 pilot, has said that given budget and personnel constraints, the Air Force needs to retire the plane to save money and free up people to learn to maintain the new F-35 joint strike fighter.

Post made his remarks while addressing airmen at a Weapons and Tactics Review Board. While fielding questions, he was asked about the status of the A-10 and began to discuss budget constraints facing the department and the reason for the decision to retire the plane.

The inspector general's investigation interviewed several witnesses who remembered Post using the word "treason" to describe efforts to oppose the Air Force leadership's decision to retire the plane, either via a social media campaign or by talking to Congress.

In his own written account, Post said he told the group the Air Force didn't want to get rid of the plane but needed to because of budget constraints. He acknowledged using the word "treason."

Attempting to prevent members of the military from lawfully communicating with Congress is a violation of the U.S. Code as well as Defense Department directives.

General Hawk Carlisle, commander of Air Combat Command, gave Post a letter of reprimand due to the findings. Post also has been removed from his position as Carlisle's vice commander.

Post issued an apology and said it was not his intent to keep people from talking to their lawmakers. No decision has been announced about a next assignment for Post, an Air Combat Command spokesman said.