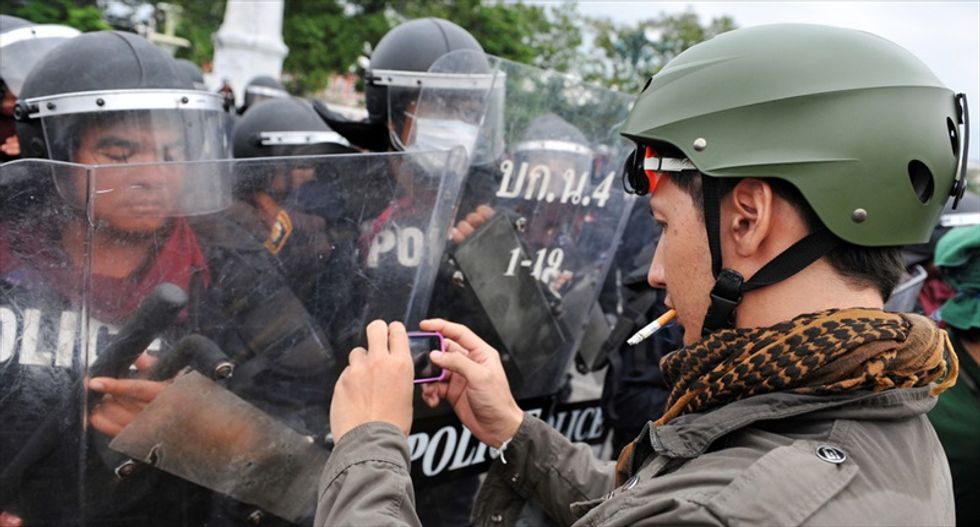 'Protester uses a smartphone to photograph riot police during an anti-government rally on Nov 24, 2012 In Bangkok, Thailand' [1000 Words / Shutterstock.com]

Americans are evenly divided on whether the widespread use of smartphone cameras will improve police behavior and think it has done little to change police conduct so far, according to a Reuters/Ipsos poll released on Tuesday.

Against the backdrop of such footage as that of a white South Carolina police officer fatally shooting a black man in the back earlier this month, 42 percent of Americans said police behavior would improve and an equal number said it would not, the poll found.

Among respondents, 56 percent said police were not behaving better so far because they could be caught on video, the poll said.

A series of incidents in the United States in which white police officers killed unarmed black men prompted protests in many cities and sparked debate over police conduct toward blacks and other minorities.

Some incidents were captured on video. One showed Walter Scott being shot in the back while running from police in North Charleston, South Carolina, after a traffic stop. Another showed Eric Garner, who died after New York City police put him in a chokehold while trying to arrest him.

The online poll of 2,446 U.S. adults showed Americans remained ambivalent on the impact of cameras on their own behavior.

Fifty-nine percent agreed with the statement: "I like how camera phones make people more accountable for their actions."

At the same time, 47 percent agreed it was an invasion of privacy for people to be constantly filming with their phones.

Neither are politicians behaving better, or likely to do so in the future, because of cellphone cameras, according to poll respondents.

The poll was conducted April 10 through April 17. The credibility interval, used to measure its precision, was plus or minus 2.3 percentage points.

(Editing by Scott Malone, Will Dunham and Peter Cooney)