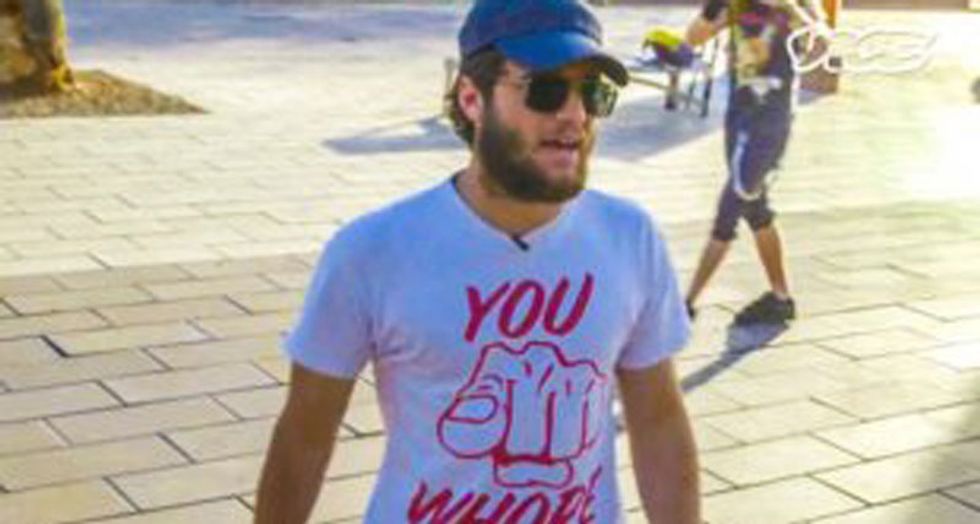 Brother Dean Saxton is a far-right hate preacher who made his name by showing up at the University of Arizona and telling young women he deemed to be improperly dressed that they deserve rape.

For years, Saxton stood on the campus harassing women, gaining so much infamy Vice News even made a mini documentary about him.

Saxton has moved on from just targeting female college students. For the past week, he has decided to stand outside a mosque in Tempe and harass those who are worshiping there. In the process, he rips pages from the Quran and throws them onto the ground, stomping on them in protest. Watch a video from his demonstration last week:

In his crusade against local mosques, Saxton has recruited some allies, including Mark Steven. Steven is pictured here standing outside the Tempe mosque:

Notice that he is carrying a handgun strapped to his waist.

The blog Stop Islamophobia Now notes that Steven's Facebook features him standing with a rifle, alongside a bumper sticker saying “Give Me Liberty Or Give Me Death”:

Dean plans to return to the Tempe mosque on a regular basis, continuing to rip pages from the Quran in front of worshipers.