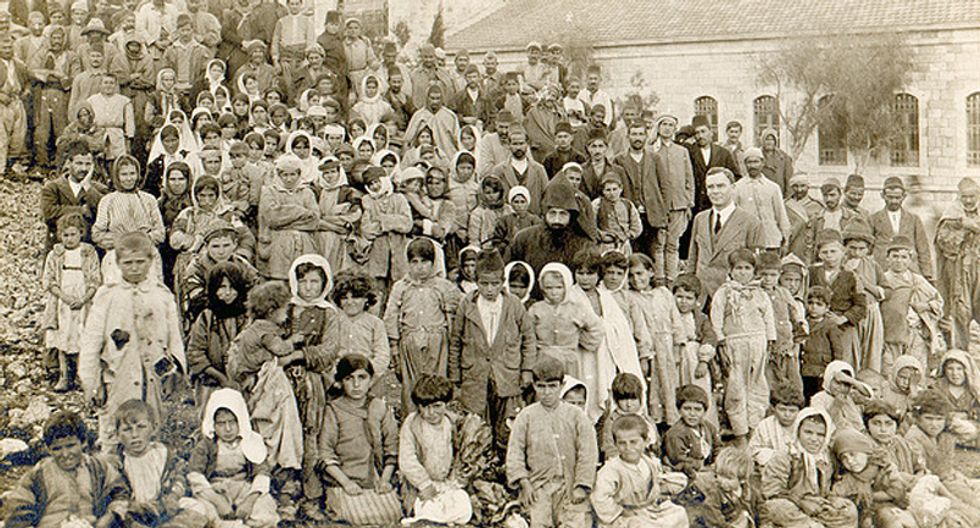 Armenians worldwide will mark the centenary of an Ottoman massacre of up to 1.5 million of their people on Friday, as tensions over Turkey's refusal to recognise the killings as genocide reach boiling point.

In a procession to a hilltop memorial in the capital Yerevan, Armenians will carry candles and flowers to lay at an eternal flame, as members of the diaspora that fled as a result of the slaughter commemorate the sombre anniversary in cities thousands of miles away.

Russian President Vladimir Putin and his French counterpart Francois Hollande are expected to be among a handful of leaders to travel to Armenia for the commemorations, but others are shying away for fear of upsetting Ankara.

In an unusual ceremony on Thursday, the Armenian Church conferred sainthood on those massacred by Ottoman forces a century ago, in what was believed to be the biggest canonisation service in history.

More than 20 nations -- including France and Russia -- have so far recognised the Armenian genocide, a definition supported by numerous historians.

German President Joachim Gauck was expected to draw an angry reaction from Turkey after he condemned the massacres as genocide for the first time, speaking at a religious service commemorating the bloodletting.

Germany deployed soldiers who took part in "planning and, in part, carrying out the deportations", he said.

Ankara on Wednesday recalled its ambassador to Vienna in response to Austrian lawmakers' decision to condemn the massacre as "genocide".

Turkey has said up to 500,000 were killed, but mostly due to war and starvation, and rejects the use of that term.

US President Barack Obama on Thursday would only go so far as to describe the World War I massacre as "terrible carnage".

Commemorations expected to draw millions in Yerevan, Paris, Los Angeles and beyond will come a day after the canonisation service, which made saints of the the 1.5 million Armenians that historians believe to have perished.

The ceremony outside Armenia's main cathedral, Echmiadzin, close to Yerevan, ended at 7:15 pm local time, or 19:15 according to the 24-hour clock (1515 GMT), to symbolise the year when the massacres started during World War I.

"During the dire years of the genocide of the Armenians, millions of our people were uprooted and massacred in a premeditated manner, passed through fire and sword, tasted the bitter fruits of torture and sorrow," Catholicos of All Armenians, Karekin II, said at the ceremony.

"The canonisation of the martyrs of the genocide brings life-giving new breath, grace and blessing to our national and ecclesiastical life."

Ex-Soviet Armenia and the huge Armenian diaspora worldwide have battled for decades to have the World War I massacres at the hands of the Ottoman forces between 1915 and 1917 recognised as a targeted genocide.

But modern Turkey, which was born of the ashes of the Ottoman Empire, has refused to do so, and relations remain frozen to this day.

Ankara says 300,000 to 500,000 Armenians and at least as many Turks died in civil -- rather than religious -- strife when Armenians rose up against their Ottoman rulers and sided with invading Russian troops.

"It is obvious that a reconciliation between the two peoples will have to come about through Turkey recognising the genocide," he told CNN-Turk.

Ahead of the ceremonies, Turkey kicked up a diplomatic storm, condemning growing "racism" in Europe.

Earlier this month Ankara also recalled its envoy to the Vatican after Pope Francis described the killings as "the first genocide of the 20th century."

Turkey will on Friday host world leaders to mark the 100th anniversary of the start of the Battle of Gallipoli, a day earlier than the actual start of fighting.

Sarkisian has accused Ankara of deliberately "trying to divert world attention" from the Yerevan commemorations.