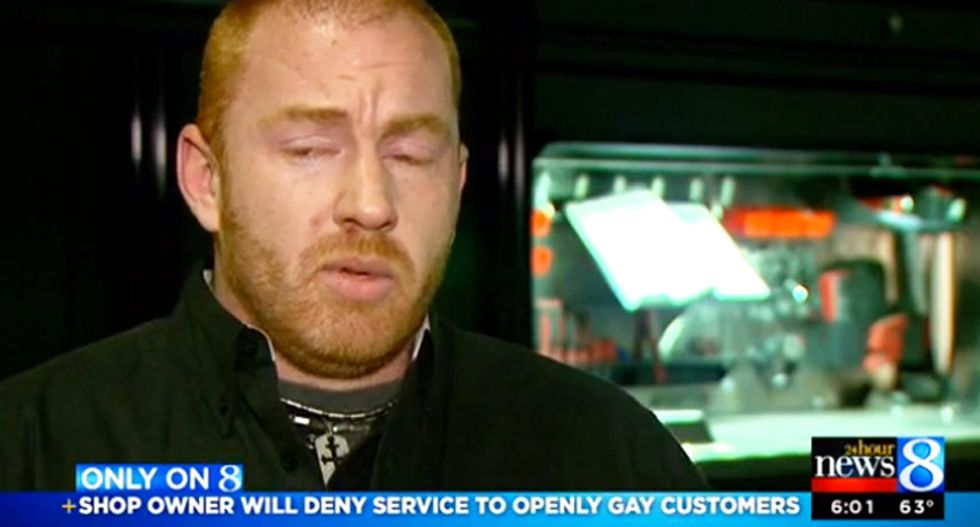 In a mocking open-letter to a Michigan auto repair shop owner following his anti-gay Facebook rant, a Grand Rapids bankruptcy attorney has offered his services to deal with the economic consequences of the business owner's "inane, incoherent and just plain dumb comments."

On Tuesday, Grandville auto shop owner Brian Klawiter posted a rambling attack on gays on Facebook, saying he would not service their cars, adding, “Homosexuality is wrong, period. If you want to argue this fact with me then I will put your vehicle together with all bolts and no nuts and you can see how that works.”

In much the same way that owners of Memories Pizza in Indiana were attacked after saying they would refuse to cater a gay wedding, Klawiter's Dieseltec auto shop has been on the receiving end of protests and death threats, seen his Yelp page overwhelmed with critical comments and sexual double entendres ("they applied liberal amounts of lube to my shaft, which again helped it run long & strong"), and saw a GoFundMe page launched, only to have it pulled down.

Sensing a business opportunity, Grand Rapids bankruptcy attorney Jeffrey Mapes, posted an open letter on Michigan Live, saying he too is "white, male, Christian, a business owner, and a gun owner," and is willing to handle Klawiter's future needs despite his "inane, incoherent and just plain dumb comments" on Facebook.

"I noticed your post on Facebook where you decided to alienate most of the general public by stating that you will refuse service to openly homosexual people, " Mapes wrote. "This is certainly an unorthodox business strategy, and perhaps it will work for you, but I get the feeling you will need a bankruptcy attorney pretty soon and I wanted to offer my services."

Mapes took pains to point out that his legal office staff is "friendly and compassionate" and willing to help, including "with some basic grammar that you seem to struggle with."

"If you still need more convincing, let me assure you that we will make certain that your bankruptcy petition is filed correctly and there are no errors. You stated in your post that you would incorrectly assemble a vehicle in order to prove a point. I want to let you know that despite the fact that I would love to prove a point to you about tolerance, I won't compromise my standards of quality to do so. After all, I have to look in the mirror at the end of the day and if I didn't do my best for everyone, I would have trouble sleeping. Perhaps you could give me pointers on how you sleep at night?" Mapes added.

Mapes went on to advise Klawiter that he was welcome to bring his gun to the office, providing he had the proper permits and would "refrain from menacingly stroking your weapon while you quietly sing David Allen Coe songs to yourself."

He then offered words of inspiration in the wake of the Facebook post that has caused Klawiter grief , quoting from the Adam Sandler film, "Billy Madison."

"What you've just said is one of the most insanely idiotic things I have ever heard. At no point in your rambling, incoherent response were you even close to anything that could be considered a rational thought. Everyone in this room is now dumber for having listened to it. I award you no points, and may God have mercy on your soul."