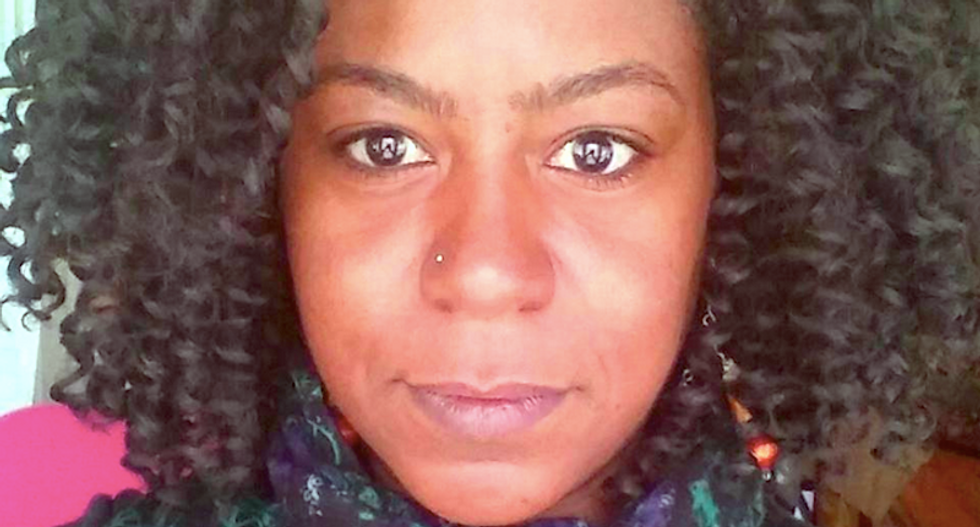 A Maine newscaster's shock at hearing a racist slur has dragged a civil rights activist's family into a national discussion on racial injustice.

Shay Stewart-Bouley, who blogs about her mixed-race family's experience in a mostly white state, said she hadn’t intended to write about the incident until Jackie Ward, weekend news anchor for WLBZ-TV, described her outrage in a widely shared Facebook post.

Ward said a man screamed “n****r” at the family of four Friday as he drove past in the historic Old Port section of Portland, and she said the family’s adult son ran after the car as she watched Stewart-Bouley comfort her 9-year-old daughter.

“The mom remained calm and stern,” Ward said. “She told the girl her brother is a grown man who can stand up for what he believes in. ‘People are going to use that word and you need to know how to stand up for yourself.’”

“My heart broke for that little girl as she harshly learned how our society has such a long way to go when it comes to racism,” the white reporter added.

Stewart-Bouley identified herself as the mother in a blog post describing her family’s “degradation (that) was witnessed by many."

She said a passenger in a car full of young white men yelled the racial slur at them, and she described the shock and confusion she and her husband felt as their 23-year-old son chased after them on foot.

“We stood there unsure what to do next, a sense of shame seeping into our souls,” said Stewart-Bouley, executive director of Community Change Inc. “To be ‘othered’ so publicly in such a vile manner is not a comfortable feeling.”

She said a white bystander eventually approached them and asked whether they were okay, and she later found her son angry but unharmed a few blocks away.

“I asked him why he ran, (and) he told me he ran for every time growing up in Maine that a grown man had called him a n****r and he was too little to do anything but hang his head,” Stewart-Bouley said. “He ran because he is tired of hanging his head and feeling nothing but shame.”

“He ran because having his baby sister hear those vile words was simply not acceptable to him,” she continued. “He ran because a pack of white men calling his mama a n****r was not okay. He knew the risk inherent in running but he also knew that at 23, he is tired of stuffing down the weight of racism and being asked to be the ‘better person’ by silently taking the abuse and waiting for society to change when it clearly has little impetus to do so. He realized that sometimes, a man has to be willing to risk everything, including an ass kicking or a jail cell, to right some of the wrongs in this world. It may seem … or maybe even be … foolish, but there comes a time when one is simply tired of dealing with injustice.”

Stewart-Bouley said she was "grateful" for the news anchor's observations, but she was "saddened" that Ward hadn't asked how they were doing afterward.

Ward later apologized in another Facebook post and said she had been reluctant to interfere with the family's privacy when she saw Stewart-Bouley talking to her daughter and instead tried to help by writing about what happened.

Stewart-Bouley explained in a series of Twitter posts how the incident -- and Ward's apparently well-meaning attempt to publicize it -- demonstrated the difficulties black Americans faced in telling their own stories.

"Blacks and other (people of color) don't need white folks to tell our stories because somehow we become cutesy in these pieces, less than ... not cool," she tweeted. "You tell a story about us, make us sound like some cute Keebler elves ... special, exotic and othered. Control of narrative matters."

She said her family's story had been framed through the experience of a white bystander, and Stewart-Bouley said she had been slammed with criticism for questioning Ward's actions.

"Whiteness was literally created as a norm in our culture and we hold everyone and everything up to the standard of whiteness," she tweeted. "Right now the story of what happened to my family is being centered in whiteness which dictates how non white people are to be."

"Whiteness say it is okay to be silent and thus complicit if our intentions were 'right,'" she added. "When whiteness is de-centered as the norm, we start to see the inherent worth of all without qualifiers."

Stewart-Bouley said awareness of racism is no longer enough, and that individual action is needed to confront white supremacy.