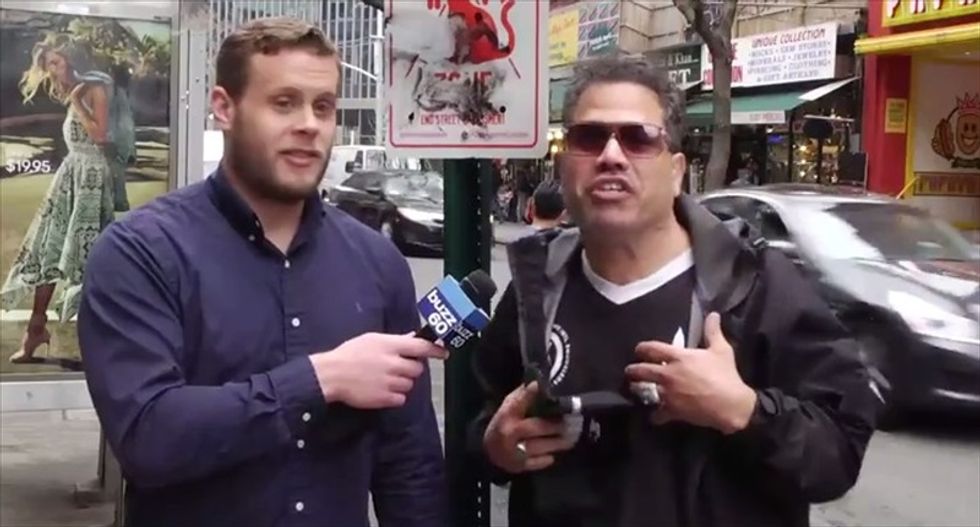 Buzz60 host Patrick Jones' story on an anti-catcalling campaign in New York City turned into a demonstration of why it was necessary, after an unsettling encounter Jones told The Raw Story is "100 percent real."

"He thought we were gonna finish the interview and go pop a few beers and sit on a stoop and yell at ladies," Jones said of one of his interview subjects, who identified himself by his rap name, Skam Dust. "He was very very shocked that I did not agree with him."

Jones said in a phone interview that the Queens-based rapper was the fourth person he interviewed out of seven subjects for the report, adding that Skam Dust waited for Jones to finish speaking to two other people before stating his point of view on camera.

"Sometimes, you gotta call a girl," Dust says before he starts making whistling and clicking noises.

"How would you call a dog?" Jones asks.

"Same way," Dust responds. He then tells Jones that women feel "good" after hearing his advances.

"Even if it's far away, it's even better," Dust says. "They're not that scared. You gotta have a little distance."

Jones told Raw Story that the entire encounter lasted 3 minutes and 45 seconds. At one point, he said, Dust was bragging about how successful his "technique" had been for him. Jones, who said he has witnessed street harassment in the past, said on Monday that he was concerned with whether he should have stopped Dust from bothering women during the interview.

"I thought it was important to let the camera roll," he recalled. "It was embarassing. I didn't want it to be like people walking by the street and people thinking I was joking with him."

The video shows that Dust was the only person Jones interviewed -- male or female -- who defended the practice. It also captures the moment where the rapper finally catches on to the focus of Jones' piece, an anti-catcalling campaign.

"Are you reporting that girls don't like this?" he asks. When Jones tells him that women do not like the harassment, Dust acts offended.

"Get the f*ck out of here, come on," he scoffs, adding, "We're just acknowledging that you did a good thing today, getting out of bed."

As the Huffington Post reported, the advocacy group Feminist Apparel put up more than 50 signs around the city reading, "No catcalling anytime."

At least one of the signs is set to go up in each of the city's five boroughs, and the campaign will also put similar signs up in Philadelphia.

Jones said both online and on the phone that the encounter was authentic.

He also said that the segment prompted some of the biggest reactions from his Buzz60 colleagues during his four years working there.

"They were totally surprised that we found a human being willing to go on camera and behave the way he did," Jones said. "My male and female friends reacted with similar disgust."

For his part, Dust seems to be reacting non-chalantly to the attention the video has garnered, but he has picked up at least one supporter. 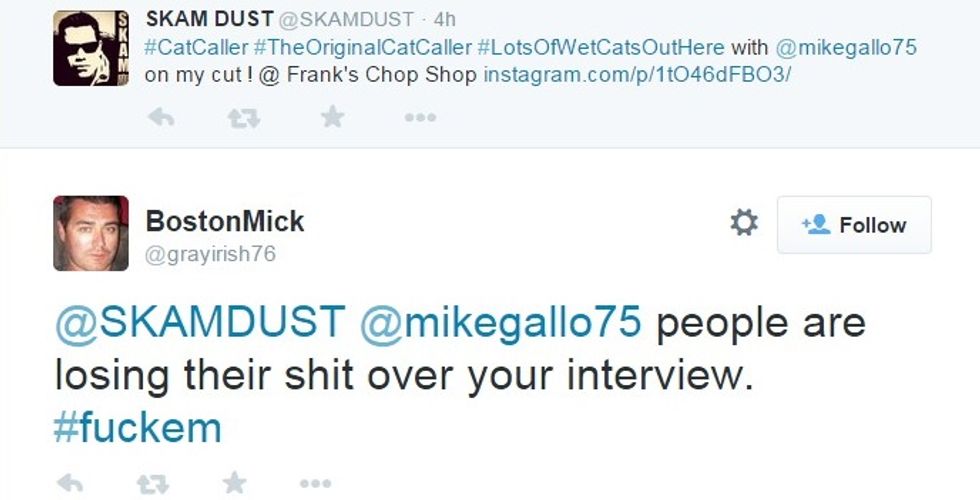 Watch Jones' report, as posted online on Friday, below.