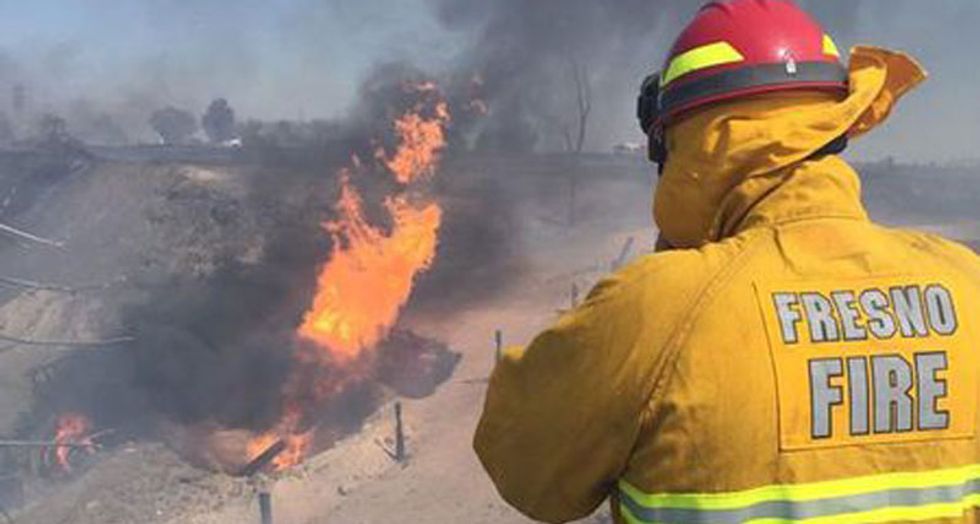 A firefighter watches the blaze after a gas line exploded near Fresno, California April 17, 2015. A construction crew accidentally ruptured a natural gas transmission line on Friday in Fresno, California, sparking an explosion and fire that injured up to 15 people, at least one of them critically, a fire department spokesman said. REUTERS/Fresno Fire Department/Handout

A construction crew on Friday accidentally ruptured a natural gas transmission line in Fresno, California, sparking an explosion and fire that injured up to 15 people, four of them critically, officials said.

The 12-inch (30-cm) pipeline, belonging to Pacific Gas & Electric Corp , was struck by a backhoe near state Highway 99, unleashing a fireball that injured members of the construction team and a jail inmate crew nearby, Fresno Fire Department spokesman Peter Martinez said.

The accident forced closure of the highway in both directions, along with an adjacent railroad line, Martinez said. Rail traffic was halted to check for possible damage to a railway bridge over a river, he said.

One worker in critical condition was flown to hospital by helicopter, and 13 or 14 others were taken to hospitals for evaluation and treatment of injuries after the pipeline was ruptured at about 2:30 p.m., Martinez added.

Four of the injured were taken to Community Regional Medical Center in Fresno, and two more were taken to the burn unit there, said hospital spokeswoman Mary Lisa Russell, adding that four were in critical condition and two serious.

The utility had shut off the gas flow by 3:20 p.m., with the residual amount in the pipeline burning off just before 4 p.m., said PG&E spokesman Donald Cutler.

The employee, who was badly burned, was the patient airlifted to Community Regional Medical Center, the paper said, citing Navarrette. Inmates on a work detail were among the injured, it added, citing Sheriff Margaret Mims.

The accident occurred at a shooting range used by law enforcement, the Fresno County Sheriff's Department told the newspaper. Fresno is about 190 miles (300 km) southeast of San Francisco.

"The CPUC will conduct a full investigation of the explosion and has already coordinated with the federal Pipeline and Hazardous Materials Safety Administration," Prosper said.

A PG&E representative said the utility was also investigating.