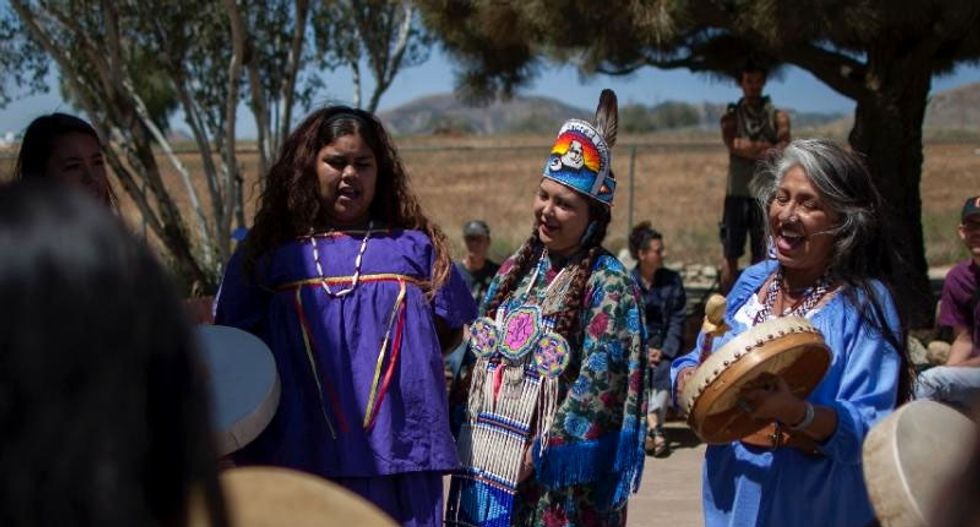 In the middle of the dusty California desert, a group of Cahuilla Native Americans gather, as they have for generations, for the annual agave festival.

Leaves from the steely, light green plant are cut, roasted over coals and passed around by a towering young man with a long black braid trailing down his back.

"Be careful, they're fibrous!" he warns the crowd gathered at the Morongo reservation near the city of Banning for the annual agave roast, a pillar of Cahuilla culture.

The festival is one way the Cahuilla people are keeping their culture alive -- from language to culinary traditions, to song and dance -- amid encroaching influences from mainstream American society.

The agave plant is passed around at the festival, as attendees suck the flesh from the slightly bitter leaves.

"It's an acquired taste," said Sharon Mattern, a return visitor to the Malki museum on Cahuilla culture, which is located on the reservation 160 kilometers (100 miles) east of Los Angeles.

Some 200 people joined for the latest agave roast, held every April at the museum in honor of the agave plant, which is cherished by the Cahuilla for its hydration and nutritious properties.

Traditionally, it was ground into a powder and stored for periods of food or water scarcity.

"It's a small celebration, but very meaningful for us," said Cahuilla elder Ernest Siva, 76.

"It's just a piece of our life, it's important for us to commemorate, to remember... this is a way to show yes, we're here and we recall some things about our traditions," he said.

Several thousand members of the tribe survive, and around 1,000 of them live on the Morongo reservation.

Their numbers have dwindled since European settlers arrived in 1776, when there were about 10,000 Cahuilla in the region.

Siva laments the encroachment of modern influences, especially when it comes to agave.

"Today you can go to the supermarket -- everything is there. There is no work, someone else does it," Siva said.

In his day, everything from the point of cultivation to consumption was done by hand.

"This required a lot of work to gather, first know where these plants are, roasting them, cutting them," he recalled.

Most people today are familiar with agave in its commercial form: blue agave is used to make tequila, while other forms are used to make a natural sweetener, common in health food stores.

Siva is not the only one embracing tradition. Malki curator Nathalie Colin said it is part of an overall trend.

"At the beginning of the 20th century, the natives seemed doomed to disappear along with their culture. Many left the reservations to assimilate into mainstream American society," Colin said.

"But we see a real revival now -- people are proud again, and they tell their kids 'this is who we are.'"

The annual agave festival is part of that pride.

A few meters from where Siva speaks, Blossom -- a woman with long black hair and a wide smile -- teaches visitors and children to weave baskets.

In a nearby garden, blooming with fragrant sage, 48-year-old Aaron Saubel sings a bird song, a repetitive, trance-like rhythm about nature's cycles.

Near the museum entrance, a group of teenagers dance to a drumbeat, punctuating their movements with hand-held tambourines.

After the dance, festival-goers join tribe members for a traditional meal.

The Malki museum, in operation for more than 50 years, is both a center of preservation and education.

It was the first museum to open on a Native American reservation in California and attracts scores of tourists every year -- both native and non-native.

Colin said cultural preservation is a matter of survival for the tribe.

"They need this to counterbalance the effects of modern society."

The museum also has a gallery of ancient objects, a library of vintage books and its own publishing house.

One of the museum's founders developed a mainstay project to devise a writing system to preserve the tribe's ancient oral language.

There are only around 20 people who speak the language fluently today, including Siva, who said he has few people to converse with in his traditional tongue.

"You talk to yourself because there is no one to talk to," he said.

Raymond Huaute teaches Cahuilla culture and said the need for preservation is urgent as the language dies off.

"People used to live together three generations -- grandparents, parents, children. Now we've lost that structure, it's hard to teach the kids. Plus, the English language is so dominant -- you have TV, Internet, so much technology," Huaute said.

"There's a resurgence in learning among young people, but we need more."