Chelsea Clinton steps into the spotlight as Hillary runs for president 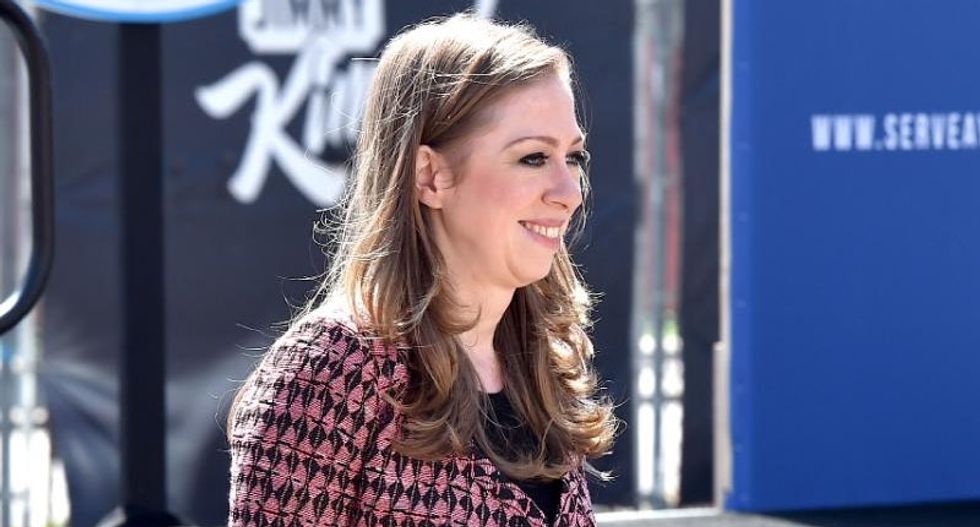 Chelsea Clinton, Vice Chair of the Clinton Foundation, appears at an announcement by ServiceNation to launch the "Serve A Year" initiatve on March 23, 2015 in Los Angeles, California (AFP Photo/Kevin Winter)

Chelsea Clinton's star is rising. Photographed, interviewed and increasingly prominent in her family's charitable empire, there is no more ardent cheerleader for her mother's bid for the presidency.

Photographed in a $1,500 Gucci dress and Cartier bracelet, the 35-year-old philanthropist, wife and new mother appeared on the front cover of Elle with an impassioned plea for a female leader.

"When you ask about the importance of having a woman president, absolutely it's important," she told the glossy magazine in remarks released the weekend her mother announced her campaign.

"One of our core values in this country is that we are the land of equal opportunity, but when equal hasn't yet included gender, there is a fundamental challenge there that, I believe, having our first woman president -- whenever that is -- will help resolve."

When Hillary Clinton, former secretary of state, senator and first lady, on Sunday ended years of speculation that she would contest the White House once again, daughter Chelsea was right behind her.

"Very proud of you Mom!" the Stanford, Columbia and Oxford University educated daughter tweeted to her more 817,800 followers.

A day earlier, the first photographs of Chelsea's six-month-old daughter Charlotte in a stroller emerged, snapped with mom, dad and pooch walking in the Manhattan sunshine.

This is the baby that softens Hillary's image. The woman seen as distant and cold has spoken of her joy at becoming a grandmother and of a child who has "helped me see the world in new ways."

Chelsea herself acknowledges being in the middle of her family's decisions and says she has influenced her parents opinions, such as on gay marriage and priorities at the Clinton Foundation.

"We have had kind of a conversation about what we think the challenges, the opportunities, the solutions are... literally my whole life," she told an audience at Harvard last week.

"The benefit of having three family members is that you have kind of two candidates and a moderator like of built in," she said.

Although it's early days, Chelsea has already been more visible than during Hillary's failed bid for the White House in 2008, when she shied away from speaking to the press.

Based on interviews with friends and associates of the Clintons, Politico reported that Chelsea is poised to become a major figure in the campaign and possibly the White House.

"I think she will play a more active role in 2016 than she did in 2008 but again I think it will be on her own terms," Meena Bose, professor of political science at Hofstra University, told AFP.

Hillary has already made improving lives for her granddaughter's generation a key message of her nascent campaign, peppering her appearances with liberal references to baby Charlotte.

"Now with Chelsea having a baby and her first granddaughter, there is that angle that can be pursued," he said.

- Perception of a disconnect -

Elle magazine breathlessly described Chelsea as the beloved daughter of two of the most powerful people on the planet who rides the subway and does the groceries.

But Bose warns that her wealth and privilege could disconnect Clinton further from ordinary voters.

Chelsea and husband Marc, who co-founded a hedge fund, paid $9.25 million for their Manhattan apartment.

She is reportedly paid up to $75,000 for speeches, more than some annual salaries, although the fees go straight to the Foundation.

"You have this slightly awkward potential perception of a disconnect, primarily for her mother, but I think it does also apply for her daughter on the campaign trail," Bose said.

It is also unclear whether she can actually deliver votes.

She was a child when her father Bill was president and may not either play as detailed a role as George W. Bush did in his father's 1988 election to the White House.

"I think a lot of commentary still puts too much emphasis on whether presidential candidates are good-looking or nice or inspiring or young or old or empathetic," Sides told AFP.

"I think the more important factors are the usual fundamentals: the level of economic growth and the popularity of the incumbent president," he added.