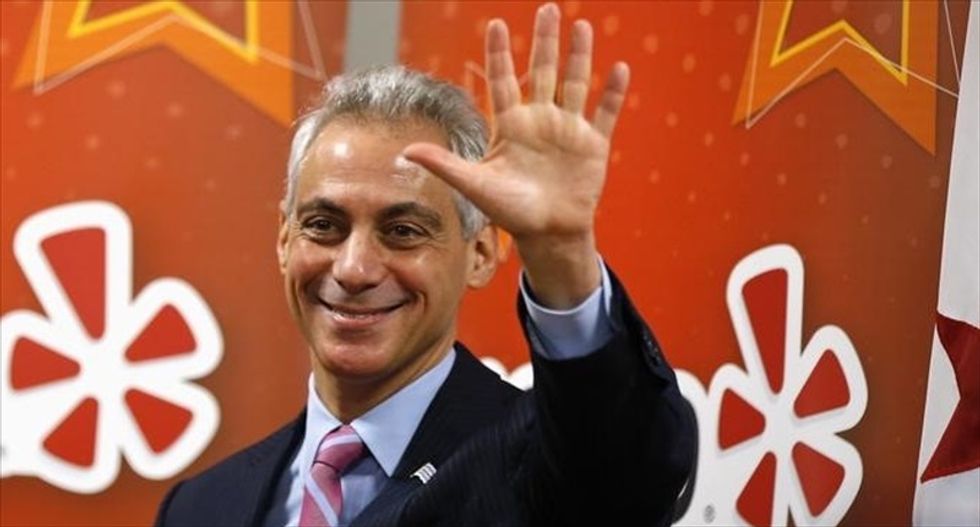 Rahm Emanuel may have been elected to a second term as Chicago's mayor on Tuesday but now he faces a stark choice: inflict pain on the city's population in the form of unpopular measures such as higher taxes or kick its problems further down the road and risk a fiscal crisis that could even lead to bankruptcy later.

While voters appear to have seen President Barack Obama's former chief of staff as more able than labor union-backed challenger Jesus “Chuy” Garcia to deal with Chicago’s massive public pension liabilities, neither candidate squarely addressed what could be a fiscal nightmare for the city.

The failure over many years to address the hole the city has dug for itself will finally catch up with Chicago if radical action isn’t taken soon to resolve the budget and pension problems, warn bankers, investors and fiscal policy experts.

"The day there's no more dollars in the kitty, the day that the city is not going to be able to pay the next set of payrolls, that's the day everyone will all of a sudden understand: ‘Wow, we really have to address this because there is no longer an option,’” said David Tawil, president of hedge fund Maglan Capital which invests in distressed situations but does not own Chicago debt.

The third-biggest U.S. city's pension liabilities are its main problem. According to the Civic Federation, an independent fiscal watchdog group, the unfunded pension liabilities for Chicago, its Board of Education and other local governments that draw taxes from Chicago total a stunning $35.05 billion.

Next year, it faces a looming $550 million increase in its pension payment for firefighters and cops.

One credit rating agency, Moody's, has Chicago's credit rating near junk status, and the city's yawning deficit is concerning investors who want evidence of reform.

"From my perspective I'm hoping that once the election gets out of the way there might be more of an ability to push through some things that might be needed to get (changes) done," said Daniel Solender, municipal bond portfolio manager at fund management group Lord Abbett, which is underweight Chicago debt due to uncertainty over how the city will address its problems.

Emanuel’s most obvious immediate fix — raising property taxes — is a long-shot amid fears it could trigger a population exodus to lower-tax states. Emanuel himself has said any tax increase would be a “last resort.”

“The higher taxes are, the more people leave the state so there are less people to pay the taxes," said Ty Fahner, a former Illinois Attorney General and a partner at law firm Mayer Brown in Chicago in a recent interview.

As alternatives, Emanuel has offered options including setting up a city-run casino and imposing a new tax on services performed by lawyers and other professionals, both of which would require state approval. But Illinois Governor Bruce Rauner has vowed not to raise taxes without major government restructuring, and though a Chicago casino could crank out $140 million a year in revenues for the city, it would be years before it would open and reach that level.

William Brandt, former chairman of the Illinois Finance Authority and head of the economic restructuring firm Development Associates, said Emanuel’s task will be remarkably complex, with little room for error.

Chicago’s dire circumstances have led to comparisons with Detroit, which filed for bankruptcy in 2013 after years of steep declines in population and economic activity.

Chicago has not seen the population losses Detroit did and its business and commercial real estate markets remain healthy, but its current circumstances are more dire than any other major American city today, with aggregate debt of $21.4 billion, up 60 percent since 2004.

Although Chicago’s situation isn’t bad enough yet to warrant a bankruptcy filing, that threat is out there if it fails to tackle its problems.

“People say Chicago’s not Detroit," said Tom Metzold, a senior portfolio advisor at investment manager Eaton Vance. "Not right now. Chicago is Detroit ten years from now. I don’t care how economically strong your economy is. They don’t have a printing press. You can only tax so much."

Metzold estimated the odds of a Chapter 9 bankruptcy in the next five years are "virtually zero" but said in the next 10 years that could rise to 25 percent if it fails to act.

The Illinois governor has already warned of a fiscal collapse. "Chicago is sliding into bankruptcy," Rauner told reporters in early March. "They can't pay their pensions, they can't pay their bills. The debt has been going up for years."

Illinois state law does not allow municipalities to file for bankruptcy although a recently-proposed state bill would give cities the right to file. Just a threat of bankruptcy could give impetus to negotiations with unions and creditors.

"I think it needs to be lurking out there in the background as a reason for negotiations,” said John Miller, co-head of fixed income for Nuveen Assset Management.

A pressing immediate concern is the likelihood that the state loses its battle to pull itself out of its own fiscal hole by reforming pensions. Legal observers expect the state’s Supreme Court to invalidate Illinois' 2013 pension reform law within weeks.

Credit rating agencies have said they could lower Chicago's rating if this happens because the city faces a similar legal challenge to its pension reform efforts by labor unions.

Chicago’s Chief Financial Officer, Lois Scott, in court testimony in December laid out a grim scenario for such a development: hundreds of millions of dollars in additional interest costs; termination of billions of dollars of credits, and ever-increasing difficulty in finding investors for debt issues.

Emanuel is hoping for a reprieve on the looming $550 million pension payment hike but John Cullerton, president of the state Senate, did not hold out much hope.

“Politically, I don’t think you want to kick the can down the road," Cullerton said.

For now, Emanuel seems unlikely to explore another option potentially available to him: the privatization of city assets.

Financial experts say privatization of a major asset, such as Chicago's Midway Airport, would generate cash and help Chicago work through its fiscal problems. But this is problematic in Chicago. Emanuel’s predecessor, Richard M. Daley, spent almost all of the $1.2 billion of proceeds from the lease of the city's parking meters, and residents' resentment grew when parking rates more than quadrupled in the first few years of the lease.

Emanuel tried to privatize Midway in 2013, but backed out after one of two bid groups dropped out.

"I don't think the Mayor wants to be the guy who sold the air field," said one restructuring industry source. "Even in bankruptcy, Detroit didn’t want to get rid of (its) art and museum."

(Reporting by Megan Davies in New York and Karen Pierog in Chicago; Editing by David Greising and Martin Howell)

Court documents filed Wednesday evening show McGahn will answer questions in private about information attributed to him in the publicly available portions of Mueller's report, although the date for that testimony has not yet been set, reported NBC News.

On Thursday, writing for MSNBC, columnist Steve Benen tore into Republican lawmakers for their increasing denial that the violent January 6 invasion of the U.S. Capitol even happened the way everyone saw it.

"The setting was a House Oversight Committee hearing on the Jan. 6 riot, which some Republicans took as an opportunity to characterize rioters as victims," wrote Benen. "Rep. Andrew Clyde (R-Ga.), for example, rejected the idea that the insurrectionist violence constituted 'an insurrection,' adding that Trump's rabid mob behaved 'in an orderly fashion.' The Georgia Republican went on to say, '[I]f you didn't know that TV footage was a video from January the 6th, you would actually think it was a normal tourist visit.' Rep. Paul Gosar (R-Ariz.) blasted the Justice Department for 'harassing' suspected rioters, whom he described as 'peaceful patriots.' Rep. Jody Hice (R-Ga.) added, 'It was Trump supporters who lost their lives that day, not Trump supporters who were taking the lives of others.'"

A Facebook content moderator this week described the traumatic experience of watching violent videos for hours a day -- and said that the company's own "wellness coaches" were ill equipped to help them cope.

Business Insider reports that content moderator Isabella Plunkett, who works for Facebook subcontractor Covalen, told the Irish Parliament this week that her job involves sifting through videos featuring child abuse, suicide, and other former of violence.