Clinton comes out swinging in first major 2016 speech: 'When women are held back, our country is held back' 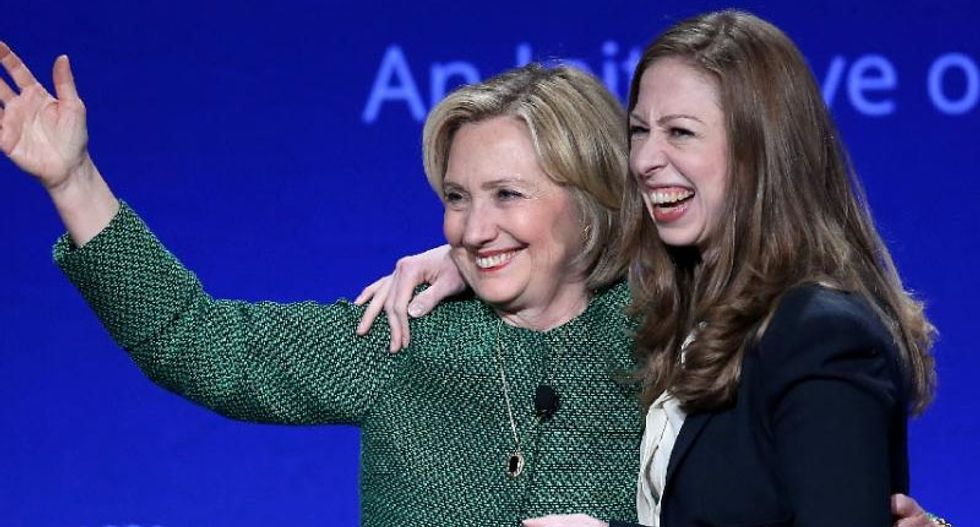 Having pledged to be the champion of everyday Americans, presidential hopeful Hillary Clinton came out swinging during a speech in New York on Thursday night that expanded her personal doctrine – “women’s rights are human rights” – to the plight of mothers, fast food workers, immigrants, retirees, students, gay and transgender people and victims of sexual abuse.

In her first big speech since declaring her presidential run, Clinton took jabs at Hobby Lobby for opposing employer-covered contraception, chided the World Economic Forum for not exactly being a “hotbed of feminist thought” and slammed Republicans for stalling the nomination of Loretta Lynch, whom the US Senate confirmed on Thursday after a lengthy delay.

“This isn’t just about women,’’ Clinton said, arguing that improving the economic security of women would benefit everyone during her keynote speech at Tina Brown’s three-day Women in the World Summit .

She added later: “When women are held back our country is held back. When women get ahead everyone gets ahead.”

It was a forum where Clinton was comfortable, on a stage she shared with powerful women, talking about a topic that has been central to her life’s work: the advancement of women and girls around the world. Clinton has spoken before at the annual summit, which was founded in 2010, but this was her first time as a presidential candidate.

“No matter who you are or where you come from, you too can be a champion for change,” Clinton said. “It doesn’t matter whether you’re a student, or an artist, a journalist or an ambassador … maybe even a future president.” The crowd erupted in wild cheers.

In her speech Clinton called for paid maternity leave for new mothers and pay equity. “It is outrageous that America is only the developed country in the free world that doesn’t guarantee paid leave to mothers of newborns,” the Democratic presidential contender said.

Clinton also criticised Republicans who support deporting immigrants with families in the US, and for seeking to defund Planned Parenthood. She also made a special nod to the LGBT community.

“We move forward when gay and transgender women are embraced as colleagues and friends, not fired from good jobs because of who they love,” she said.

Clinton mentioned “my most amazing unbelievable fabulous granddaughter” Charlotte Clinton Mezvinsky a few times in her roughly 20-minute speech, as she has been doing on the campaign trail.

“It’s not about her that I worry,” Clinton said, referring to her granddaughter. “It’s about what we need to do to make sure every child, every single child, has the same chance at equality and opportunity. That’s the dream we share. That’s the fight we must wage. We are so close. Closer than we’ve ever been.”

“I’ve always said how incredibly important Margaret Thatcher was – although I didn’t agree with her politics,” Mirren said on Thursday. “She was a role model for a little three-year-old girl [to think] that she could become the prime minister of England. It’s so incredibly important. So go Hillary!”

Clinton was introduced by Beatrice Biira, whose story about how the gift of a goat lifted her from poverty has been trumpeted as proof that humanitarian aid – even on a small scale – can have a huge impact.

Biira – an education-starved daughter of two poor farmers in Uganda who would later work as an intern to Clinton when she was a US senator for New York – said her life changed when her family received a goat as gift from an Arkansas-based aid group Heifer International. The money her family earned from the goat’s milk enabled Biira to attend school, where she excelled before moving to the US to continue her education.

“Hillary Clinton stands for everything I admire and everything I want to be – compassionate, fearless, sincere,” said Biira, who now works at Heifer International. “She is a true leader.”

Clinton has long championed the rights of women and girls around the world. And on Thursday she recalled perhaps her most famous speech, made 20 years ago at the world conference on women in Beijing, when she declared: “Women’s rights are human rights.”|

But for some Clinton’s sterling record on women’s issues is in part tarnished by the millions in donations her family’s foundation has accepted form nations with terrible human and women’s rights records, including Saudi Arabia, the United Arab Emirates, Oman, Qatar and Kuwait. To avoid questions raised around the ethics of the donations the Clinton Foundation announced earlier this month that it would no longer accept donations from some Gulf Arab states.

Still, as Clinton spoke in New York, her campaign worked to stamp out fires sparked by a not-yet-published but already controversial book Clinton Cash by Peter Schweizer.

Despite efforts by the Clinton campaign to quash the book’s credibility, dismissing it as a conservative hit job ahead of it’s release on 5 May, outlets that struck a deal with the publisher to comb its pages in advance have begun reporting out some of the leads.

On Thursday the New York Times published a report , inspired in part by revelations from Schweizer’s book, tying the Clintons to a deal between the Russian atomic energy agency and a Canadian company named Uranium One.

After Clinton spoke on Thursday night she shook hands with her supporters in the front row and even posed for a few selfies. One group of women shrieked “Hillary!” as she bent down to greet them.

Karla Villarreal, 32, said she was moved to tears by hearing Clinton speak. Villarreal said she especially related to Clinton’s call for strengthening the nation’s social security system so that Americans could support themselves during retirement.

First-generation college student Alexa Reghenzani, who managed to snap a selfie with Clinton, said she was pleased to hear Clinton raise the issue of women’s education.

“It was really amazing to see that she wants to close the wage gap, that’s she’s so supportive of American families, that she’s supportive of the gay and transgender communities,” Reghenzani said. “It’s so amazing to hear all of that and to see her in person just was so touching and exciting.”

Asked if she could see Clinton as the next president of the United States, Reghenzani said: “Definitely. In my mind there’s no other choice.”