CNN host wallops Marco Rubio: On marriage equality, 'you're the candidate of yesterday' 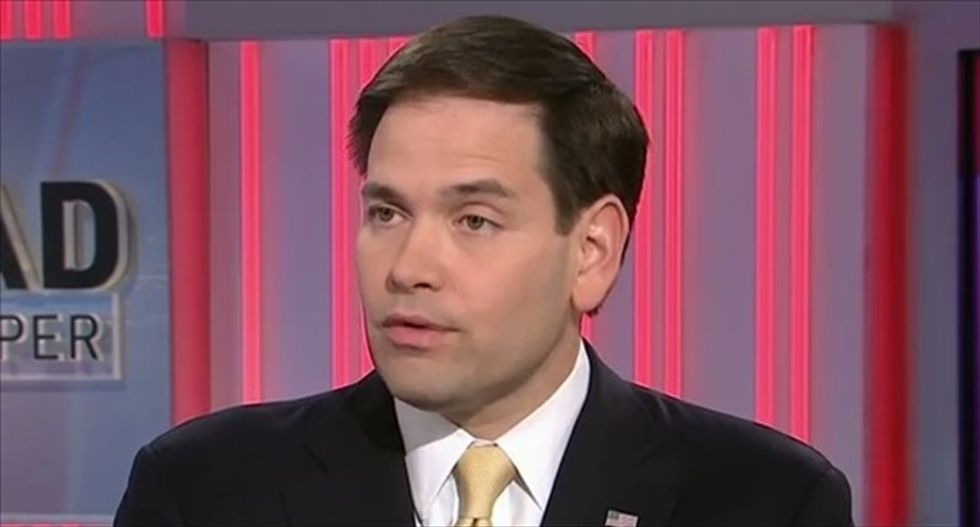 CNN host Jake Tapper turned Sen. Marco Rubio's (R-FL) jab at Hillary Clinton around on him to press the senator on same-sex marriage during an interview on Tuesday.

"You are casting yourself as a candidate of a new generation, but there is an issue where you are very out of step with younger voters -- even younger Republican voters," Tapper told Rubio. "According to a Pew poll, 61 percent of Republican voters under the age of 30, I believe, support same-sex marriage. On that issue, same-sex marriage, senator, you're the candidate of yesterday."

Rubio had referred to Clinton, the former secretary of state and presumptive Democratic nominee for 2016, as a "leader of yesterday" as he announced his entry into the presidential race on Monday evening.

The survey in question, taken in March 2014, showed that 61 percent of Republicans between the ages of 18 and 29 favored allowing gay and lesbian couples to marry, compared to 77 percent of Democrats in the same age group.

The Washington Post reported last month that support for marriage equality has also increased among likely GOP voters in Iowa, New Hampshire and South Carolina; 52 percent of respondents in the latter two states said they would consider a candidate opposing the idea "mostly or totally unacceptable," as did 47 percent of Iowa voters.

Rubio told Tapper that he believed marriage equality should be determined at the state level.

"I [have] not, for example, ever supported a federal constitutional amendment that defined marriage because I believe states define marriage in their laws," he argued. "And if, in fact, people feel that way as that poll says, they can petition their state legislature to change the law."

He also said that there was still a "significant number" of Americans who opposed same-sex marriages, before Tapper interjected, saying, "they're a minority."

While Rubio said he did not support a federal ban on same-sex equality, the Advocate reported that Rubio supported the Defense of Marriage Act in 2011, saying it "protects one of our most sacred institutions."

The senator has also lent his support to anti-LGBT organizations like the National Organization for Marriage and the Florida Family Policy Council, while also referring to adoption by same-sex couples as a "social experiment."

Watch footage from the interview, as posted by CNN on Tuesday, below.