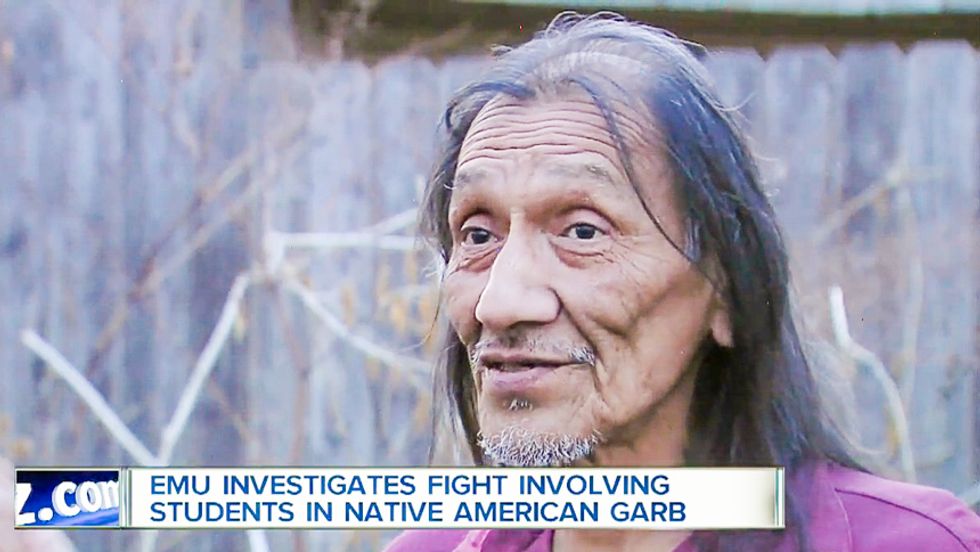 A group of college students at Eastern Michigan University are under investigation after they allegedly held a "Red Face" party and shouted racial slurs at an elderly Native American man who complained to them that he was offended.

Omaha Nation member Nathan Phillips told WXYZ that he is proud of his Native American heritage, so he was upset when students saw him on the street last Friday and waved him over to their "Red Face" party.

“About the same time I noticed them, some of them noticed me and waved me over,” he said, recalling that the 30 to 40 students had their faces painted red and that they were wearing headpieces made out of feathers.

Phillips said that the students said that the party was themed on Eastern Michigan University's original nickname, the Hurons, which was changed to the Eagles in the 1990s after decades of resistance from the Native American community. The university also changed its American Indian logo that was associated with the Huron nickname.

“We are Hurons and we are doing a ceremony to impregnate women," one of the students said, according to Native News Online.

“This isn’t honoring us, this is racist. And as soon as I said ‘racist,' it turned from honoring the Indians to, ‘Go back to the reservation, you F-ing Indian, get the F out of here.’"

Phillips said that someone threw a beer can at him before he was able to leave.

Native American Student Organization Vice President said that the incident left her worried that native students would not feel safe on campus.

"We know that cultural appropriation very often leads violence to towards the culture that is being appropriated," she explained, adding that any use of the word "hurons" fostered "dehumanization of our community."

In a statement released last week, Eastern Michigan University said that officials were investigating the incident.

"Officials at Eastern Michigan University became aware on Sunday, April 12, 2015 that a party took place the previous afternoon at an off-campus location on Hamilton Street," the statement said. "It was reported that some of those in attendance at the party were EMU students dressed as Native Americans. It was further reported that the group had an altercation with a member of the community who, upon witnessing the students, expressed offense regarding their dress and behavior."

"The investigation into this matter is ongoing, and will be guided by the University’s policies and procedures that govern student conduct."

Lietz remarked that she hoped that the university would use the opportunity to "finally come out and condemn this sort of behavior."