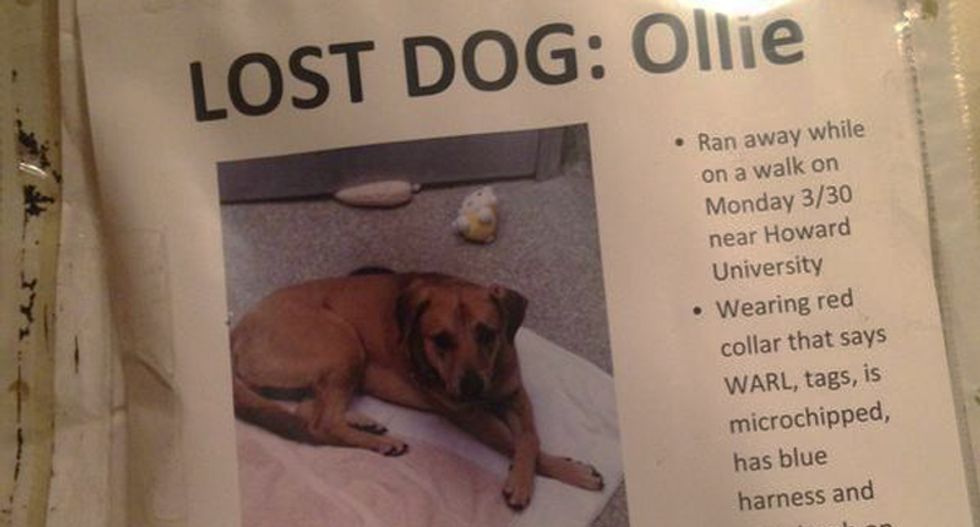 A D.C. couple have been forced to take down posters seeking help finding their missing rescue dog after police threatened them with $750,000 in fines, reports NBC4.

According to Roger Horowitz, he and and wife Annemarie spent Friday ripping down fliers they posted about his missing dog, Ollie, after receiving a call from a  police officer telling them to take the signs down or face a massive fine.

"He told me that regardless if we put up the fliers, or if other people put them up, we had made the original flier that had my phone number, and that we could get fined up to $750,000," Horowitz said.

Horowitz admitted that he and volunteers had posted thousands of fliers after receiving encouragement from the police when filing a report about the missing dog.

According to the D.C. Municipal Code: "No person shall affix a sign, advertisement, or poster to any public lamppost or appurtenances of a lamppost, except as provided in accordance with this section."

Responding to press inquiries, authorities stated that violations can result in a $300 fine, but were unclear if that's per sign.

Horowitz said Ollie -- who was rescued from an abusive owner who shot him with a shotgun-- escaped from the couple when he panicked after a car backfired.

"A car just backfired, and he suddenly just bolted and managed to get away with the leash," Horowitz explained.

Horowitz has removed the offending flyers and has been using social media under #FindOllie, to find the missing pooch.