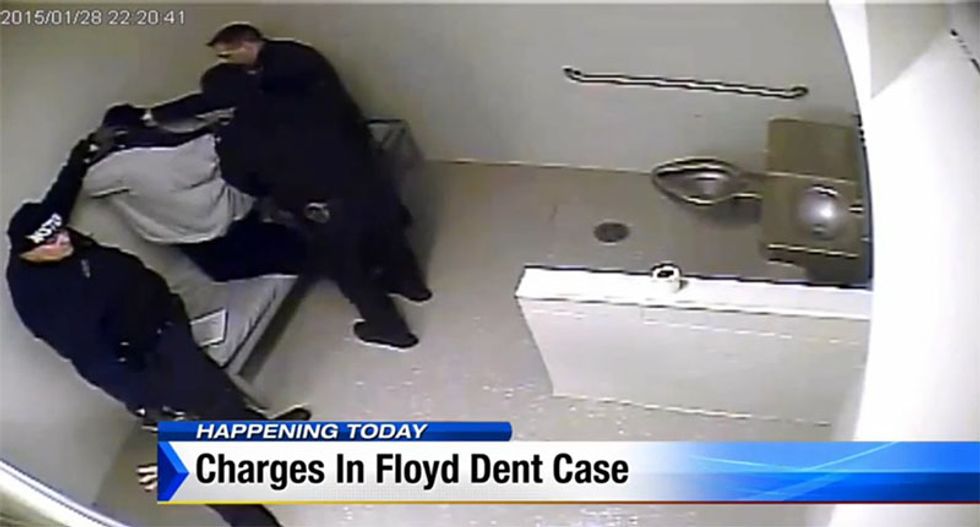 A former police officer who served in Inkster, Michigan, will face charges after video released on Sunday showed him beating Detroit resident Floyd Dent during an arrest, according to the Detroit Metro Times.

Wayne County Prosecutor Kym Worthy announced Monday that officer William Melendez, who was nicknamed "RoboCop," will be charged with misconduct of office and assault with intent to commit great bodily harm less than murder.

"To many people in this region and across this country ... police brutality seems to be out of control," Worthy said.

The charges came after a new video was released by the Inkster Police Department yesterday on the request of the attorney of Floyd Dent, who was the suspect arrested in the video.

The video, shot on a the surveillance cam in the jail cell at the Inkster police station, shows Dent with blood on the front of his shirt and appearing to be wiping blood from his head. The video has no audio but Dent told Local 4 Defenders that he was pleading with officers for medical attention and was denied until the police finished processing him later.

“I'm just sittin there, and everyone is just looking at me like I'm a circus clown,” he recalled his ordeal. “[I’m] bleeding like a hog, and then they put me in the jail cell.”

He also said that the officers stripped him down to shorts.

“They had me lean up against the wall, on the bench on my knees," he said. "This is so terrible.”

Another video that shows Dent's arrest in January was released earlier last week. Shot on the dashboard cam, it shows that Floyd Dent was pulled out of his car, locked in a chokehold, and punched 16 times in the head by Officer William Melendez. Dent was also kicked and tased three times.

In the video, Dent didn't appear to fight back or resist arrest as the police claim.

Dent's attorney said that the released video was edited by the Inkster Police Department, and requested the police to release the full-length 21-minute video.

Dent was charged with possession of cocaine, but he said police had planted the drugs after beating him during the arrest. He has since passed a lie detector test.

Worthy dismissed the cocaine possession charge against Dent on Monday.

A protest is scheduled today at noon in Highland Park. The protesters say that if Melendez works as a police officer in Highland Park, they don't want him "on the street."