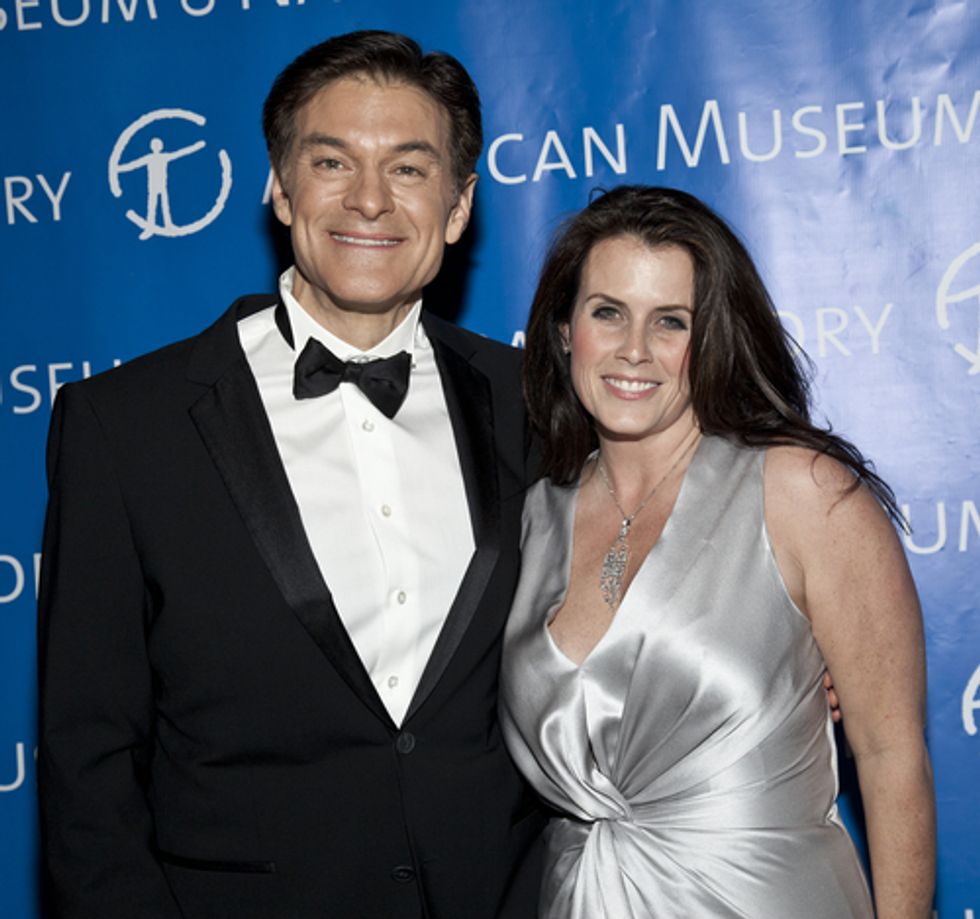 Dr. Oz keeps feeling more heat over his show where he routinely pushes snake oil on an audience that understandably believes that they're getting responsible health education, because, after all, Dr. Oz is a surgeon and a professor at Columbia University. Now a group of influential doctors has written a letter to Columbia, asking them to drop Dr. Oz on the grounds that he's a quack and a charlatan---not in his surgery work, but when he is pushing weight loss supplements and other "alt medicine"  horseshit on his show. From the letter:

As described here and here, as well as in other publications, Dr. Oz has repeatedly shown disdain for science and for evidence-based medicine, as well as baseless and relentless opposition to the genetic engineering of food crops.  Worst of all, he has manifested an egregious lack of integrity by promoting quack treatments and cures in the interest of personal financial gain.

Dr. Oz is responding, though generically to "critics", on Thursday's episode, but a clip has already been released. If you had any hope he would show any sign of intellectual honesty in his response, I'm sorry to disappoint you. He's pulling the Freeze Peach card.

"I know I've irritated some potential allies in our quest to make America healthy," he says, as if his critics are opposed to health, when in fact they are trying to protect people's health against his quack faux medicine. "No matter our disagreements, freedom of speech is the most fundamental right we have as Americans. And these 10 doctors are trying to silence that right."

The martyrdom conclusion: "So I vow to you right here and right now: we will not be silenced, we will not give in."

Needless to say, having free speech rights does not guarantee you either a TV show or a professorship at Columbia University. The issue here is straightforward one, of basic medical ethics. Dr. Oz gets people to trust and listen to him because of his position as a doctor at an elite institution. He violates their trust by telling them things he knows are not true, especially on issues that are as sensitive as weight loss. As Julia Belluz at Vox explained:

Oz's dubious medical advice wouldn't be such a problem if people saw the show as merely entertainment — if they simply watched the show but didn't take its claims to heart. But it's clear viewers really do heed his advice. There's the case of a man who followed Oz's suggestion of curing insomnia by pouring uncooked rice into socks, heating them in a microwave, and wearing them to bed. The man got second- and third-degree burns on his feet. He sued, but the case was thrown out because the judge determined that Oz cannot establish a physician-patient relationship through TV.

Not everyone agrees with the judge's reasoning. Rochester New York medical student and blogger Benjamin Mazer has been publishinganonymous stories sent into him from health professionals about the impact Oz has had on patient care. One reported that her dad had a heart attack and five stents placed in his heart, which required him to take aspirin and Plavix to prevent blood clots. "He was watching Dr. Oz, who said Plavix was not necessary, so he stopped taking it. About a month later, he had another massive [heart attack] and coded and had to be shocked back to life." She continued: "My dad admitted to following Dr. Oz's advice and not asking his own cardiologist."

There's also the powerful "Oz effect," which has worked on everything from raspberry ketone supplements to neti pots. This suggests that people act on Oz's health advice as if he were their own doctor, for better or worse. (While Oz has been careful to point out repeatedly that he does not "directly" endorse any company or product, he is available for strategic partnerships, according to the Oz Media website: "Our goal is for Dr. Oz to forge a direct and authentic connection between you and your demographic.")

Again, this is not their fault. He is a professor at Columbia Medical School. If he doesn't know what he's talking about, who can you trust? This problem is only compounded by the fact that a lot of Americans don't have really good access to medical care. They may have crappy insurance or no insurance at all, and while Obamacare has helped in that area, it's not a cure-all. But even if you do have health insurance, visiting your doctor isn't exactly a great experience. Doctors are under immense amounts of pressure to keep visits to 15 minutes or less.  Dr. Oz's show, in contrast, is like an hour a day every day. Of course people are going to start listening to him.

But it's the weight loss thing that really gets me. A  lot of Americans want to lose weight, but losing weight is extremely hard and keeping it off is nearly impossible. That makes them extremely vulnerable to people claiming they have a shortcut or easy way out through this supplement or that, and having Dr. Oz put his medical imprimatur on these claims just makes it that much worse. And this is not harmless in the slightest, especially if people taking supplements think that it means they can increase their calorie consumption or reduce their exercise because the pill is doing the work for them. I realize that there's always a "be sure to eat right and exercise" claim attached to these pills, but let's be honest, that's hard to hear when you're hearing about this "miracle" herb that will supposedly speed up your metabolism. That sounds an awful lot like exercise in a pill, and so of course people will think that's what you're selling.

So yeah, Dr. Oz is an asshole. This confirms it. No one is telling you that you don't have free speech, but if you want to call yourself a doctor, you should act like one.