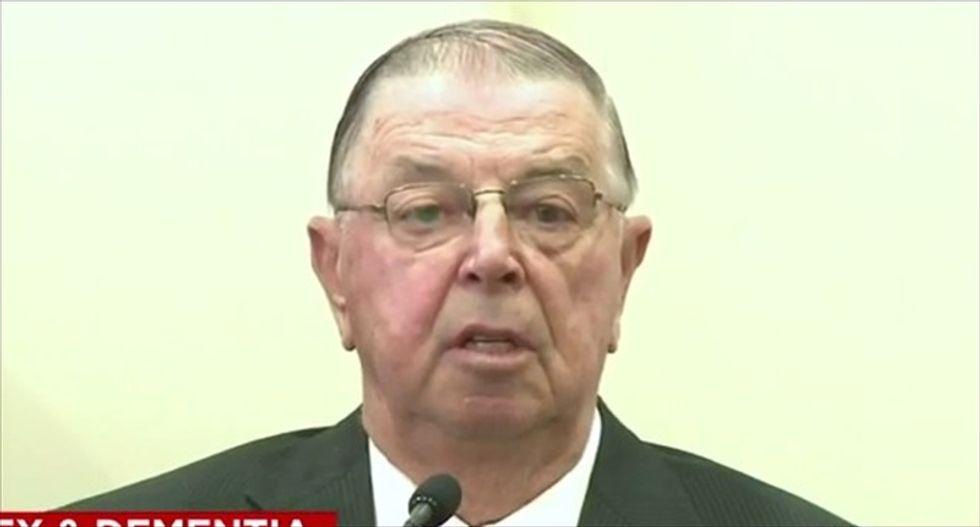 A former Republican state representative in Iowa was found not guilty on Wednesday of sexually assaulting his wife, who prosecutors said was not able to consent because she suffered from dementia, the Associated Press reported.

Henry Rayhons testified that he had no sexual contact with Donna Lou Rayhons when he visited her at the Concord Care Center last May. The former lawmaker had been told by his wife's physician that she was not mentally capable of consenting to that kind of activity. He said they "held hands, prayed and kissed" instead. Donna Lou Rayhons died last August.

During other visits, he said, his wife fondled him, and suggested she wanted to "play."

"I always assumed that if somebody asks for something, they have the capacity," he testified.

According to the Des Moines Register, the 78-year-old ex-legislator also broke down in tears several times while on the stand last Friday.

"I treated her like a queen. She was my queen," he said, adding, "I miss her every day. I will never take her ring off."

Staff members at the nursing home testified that Donna Lou Rayhons' roommate in the nursing home, an 86-year-old woman, "alluded" to hearing her having sex with her husband, without specifically saying she heard sounds associated with sexual contact. But the roommate testified, "I really can't say," when asked about what she heard by Henry Rayhons' attorney.

Rayhons' lawyer also argued that a recording of authorities interviewing him about the alleged attack showed that Rayhons had been coerced into saying they had sex "a few times." The Register observed that Rayhons sounded "confused at times" on the recording.

"I would guess that if I did indeed have sex that night, that she asked for it," Rayhons said during the interview.

"Okay, and how did she ask for it?" an investigator responded. "What did she say?"

"She says, 'Shall we play a little game?'" Rayhons said.

Rayhons served nine terms in the state legislature, but chose not to pursue another term after being accused of assaulting his wife.

"The truth finally came out," he said after being found not guilty.

Watch a report on the trial, as posted online on Monday, below.