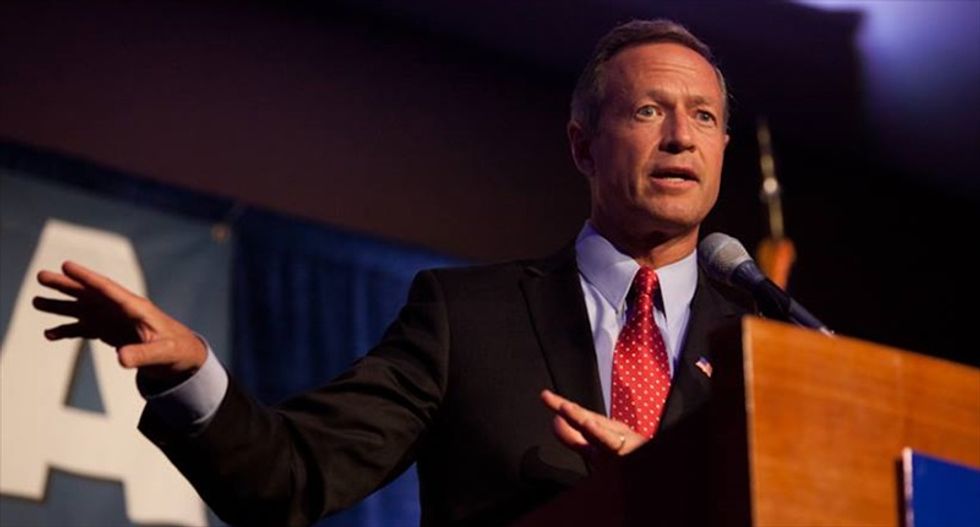 By Nicky Woolf in Cambridge, Massachusetts and Ben Jacobs in Washington

Hillary Clinton’s top potential challenger for the Democratic presidential nomination has taken his most direct policy shots at the former secretary of state since her campaign for the White House began, calling out Clinton by name for what he all but called a flip-flop on marriage equality and immigration reform.

Former Maryland governor Martin O’Malley, at his first public event following Clinton’s campaign announcement on Sunday, also endorsed a national $15 minimum wage – the only major potential candidate for US president to do so.

O’Malley has treaded lightly before officially declaring a run for president himself, with carefully prepared answers and the release of a video on Wednesday that indirectly alluded to Clinton’s evolution on same-sex marriage just hours earlier. Since Clinton hit the campaign trail, he had avoided mentioning her by name.

But in response to a question from the Guardian at an event at Harvard University on Thursday, asking for his response to Clinton’s updating of her positions on both marriage as a federal right and driver’s licenses for illegal immigrants in the days following her high-profile announcement on Sunday, O’Malley pressed harder.

“I’m glad Secretary Clinton’s come around to the right positions on these issues,” O’Malley told the Guardian during the forum at Harvard’s Institute of Politics. “I believe that we are best as a party when we lead with our principles and not according to the polls.

“Leadership is about making the right decision, and the best decision before sometimes it becomes entirely popular.”

While the response did not represent a direct attack line from Clinton’s would-be rival, it represents the most confrontational moment from O’Malley toward his potential opponent since Clinton announced her candidacy on Sunday – with perhaps many to come before November 2016.

O’Malley told the audience at Harvard that he would decide whether to run in May, but his sideways encounter with Clinton arrived over two issues on which the former secretary of state has evolved from being out of step with the Democratic party’s progressive base, which is calling on O’Malley to challenge the frontrunner.

Ahead of an official campaign stop in Iowa on Wednesday, Clinton’s campaign team released a statement, confirmed by the Guardian, expressing her support for same-sex marriage as a federal constitutional right. The position marked a reversal – coming just two weeks ahead of a supreme court hearing on the issue – from last year, when she told NPR that she thought marriage legality should be decided by the states.

O’Malley, who signed a bill legalizing same-sex marriage in Maryland, has said that marriage equality is “a human right” and should not be left to the states.

As governor, O’Malley signed a bill allowing illegal immigrants to get driver’s licenses in Maryland.

Following nationwide “Fight for $15” protests on Wednesday from striking workers seeking a federal minimum wage of $15 per hour, Clinton sent a tweet: “Every American deserves a fair shot at success,” she wrote, echoing calls for wage equality from the campaign trail – without endorsing or even mentioning a number.

At Harvard on Thursday, O’Malley pointed out that he raised the minimum wage in Maryland to $10.10, insisting he would have gone higher with legislative support.

“You’re going to see, I predict, more and more metropolitan areas raising their minimum wage,” he said, “and it’s going to make their cities and metro areas stronger.”

Unlike Clinton, O’Malley is still not a declared candidate. He said would make a decision as to whether he was running for the Democratic nomination for president by the end of May.

“It’s a colossal undertaking, and there are many different components of [a presidential race]”, he said at Harvard on Thursday. “Organisation, policy, personnel – its a lot to put together.

On Monday, Sykes appeared on MSNBC to talk about his recent op-ed advising "never-Trump" Republicans that it is "time say goodbye" to their party.