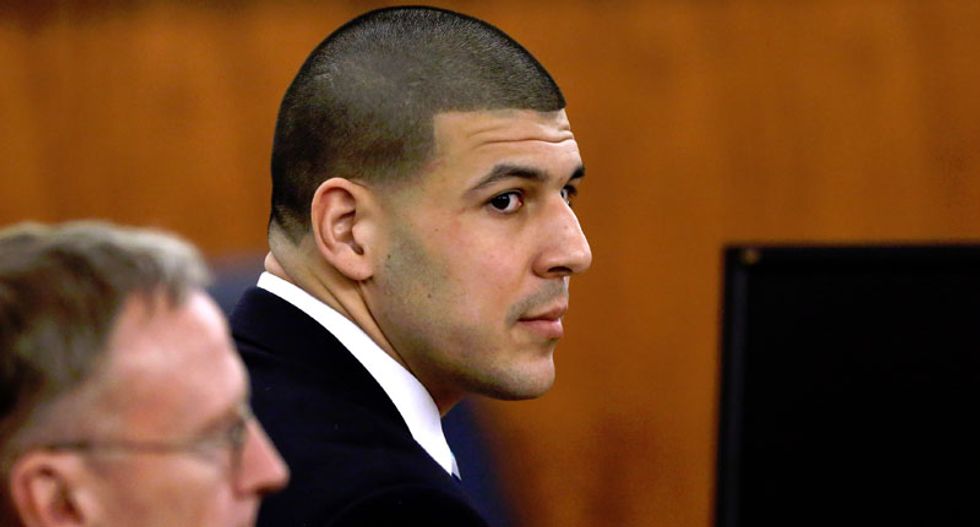 Former National Football League star Aaron Hernandez murdered an acquaintance in an industrial park near his Massachusetts home, a jury determined on Wednesday, at the end of the first of two murder trials the former player faces this year.

The jury found Hernandez, 25, guilty of first-degree murder in the June 2013 slaying of Odin Lloyd, who had been dating Hernandez's fiancee's sister at the time. During the trial, the men were described as having been in the early stages of friendship, but Hernandez soured on his victim after Lloyd hung out with people the former New England Patriots tight end disliked.

The Patriots cut Hernandez, a rising star with a $41 million contract, hours after his arrest on June 26, 2013, nine days after a teenage jogger found Lloyd's body.

The highly publicized case was another black eye for the NFL. The United States' most profitable sports league was already facing a lawsuit by former players who contend it ignored the concussion risks they faced on the gridiron and criticism for its handling of cases involving domestic violence by players.

During the four months of testimony, the jury heard from more than 130 witnesses who testified that Hernandez, a native of Bristol, Connecticut, was a regular user of marijuana and sometimes of the stimulant PCP, that he owned guns and at times acted paranoid and said he felt his friends did not appreciate the things he did for them.

The witnesses included Alexander Bradley, a former friend of Hernandez's who charged in a civil lawsuit that the former NFL player shot him in the face in February 2013, costing him an eye. Bradley, who never pursued criminal charges over the incident, testified that he saw Hernandez handle a gun similar to the one used to kill Lloyd, but was not allowed to tell the jury about the shooting.

Investigators never recovered the .45-caliber Glock pistol that was used to pump six bullets into Lloyd, who had been a semiprofessional football player.

Robert Kraft, the Patriots' billionaire owner, was also called to the stand. Kraft testified that Hernandez said he was innocent and claimed to have been at a nightclub at the time of the killing.

The first-degree murder conviction carries a mandatory sentence of life in prison without possibility of parole.

Prosecutors contended that two friends, Ernest Wallace and Carlos Ortiz, were with Hernandez at the time of the killing. Those two men will be tried separately.

Defense lawyers closed their case by saying Hernandez had been present at the time of Lloyd's slaying, but had been a witness not a participant.

"He was a 23-year-old kid who witnessed ... a shocking killing committed by somebody he knew," said defense attorney James Sultan. "He really didn't know what to do. So he just put one foot in front of the other."

Prosecutors countered that Hernandez had plotted and controlled every detail of the slaying.

"He believed he could kill Odin Lloyd and nobody would ever believe that he was involved," said Assistant District Attorney William McCauley.

Hernandez faces another trial beginning later this year in Boston, where he is charged with fatally shooting Cape Verdean nationals Daniel Abreu and Safirdo Furtado outside a nightclub after one of them spilled a drink. The jury that rendered the Lloyd verdict was not told about that case.