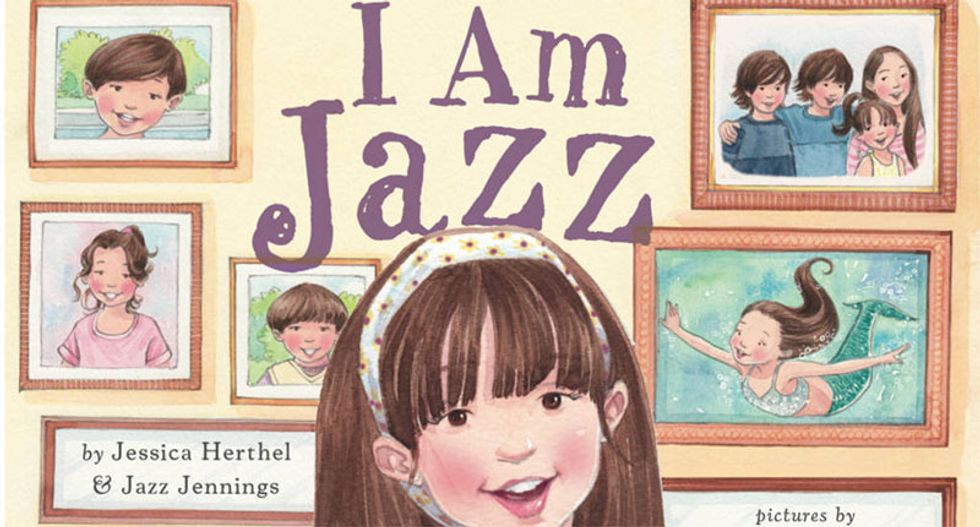 I Am Jazz cover art

A father of a transgender child in the Kittery school system issued a statement in support of the school using a transgender book in the classroom after Fox News's Sean Hannity's website attacked the school last week, Seacoast Online reports.

The book about a transgender child, I Am Jazz by Jessica Herthel and Jazz Jennings, was read to 20 of 22 classes in Horace Mitchell School, a Grades K-3 school in Kittery, Maine, during a lesson on tolerance and acceptance implemented by the guidance department. Conservative TV personality Sean Hannity's website attacked the school last week, citing an email from an angry mother complaining that her first-grade child received the lesson without advance notification to parents.

In support of the school, a father of a transgender student in the school district issued a statement.  To protect the child's identity, the statement is anonymous.

“We fully support the staff of Horace Mitchell School,” it begins. “People in this country, parents in this country are outraged by bullying, teen suicide rates and the depression in children. The staff of Mitchell School is doing something about this. By teaching acceptance and love they are shedding a light on (lesbian, gay, bisexual, transgender or questioning) issues. Reading ‘I Am Jazz’ by Jazz Jennings to students is a way of showing them that gender can be more complicated than just boys and girls. Some people are born somewhere in between."

The school, while defending the use of I Am Jazz in the classroom, apologized in a letter to parents for its oversight in notifying them in advance of such "sensitive material."

The transgender student's father, however, disagrees that the book about a transgender child is "sensitive material" despite her support of the school.

"LGBTQ issues should never be classified as a 'sensitive subject' -- there is nothing sensitive about the way we are born," he said in his statement. "Blonde hair, brown hair, gay, straight or somewhere in-between, we are all people and we all need acceptance."

A majority of parents expressed support of the lesson, although some others would have rather had notification in advance, according to Superintendent of Schools Allyn Hutton.

"We understand that toleration is tolerating people of all opinions," Hutton said.