Fears of third eruption after Chile volcano roars to life 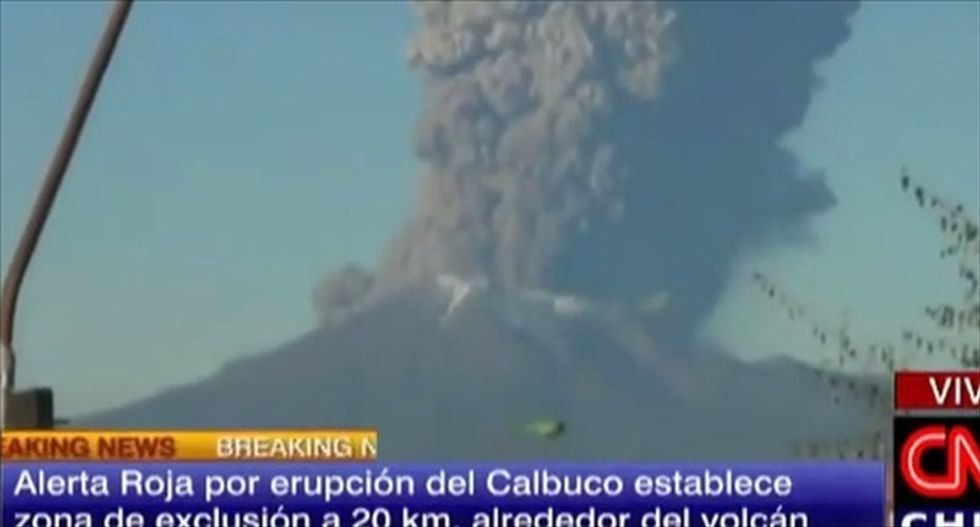 Southern Chile remained on alert Friday for another eruption from the Calbuco volcano after it burst into life in spectacular, fiery fashion for the first time in half a century, forcing 5,000 people to evacuate and lighting up the night sky.

Authorities declared a state of emergency, sent in the army and evacuated a 21-kilometer (13-mile) radius around the volcano after the twin eruptions -- the first on Wednesday as night fell and the second early Thursday before sunrise.

The volcano, which had last erupted 54 years ago, may not be done quite yet, experts and officials warned, after it put on a spectacular show of volcanic lightning and exploding lava.

Chile's National Geology and Mines Service cautioned that a third eruption could follow. President Michelle Bachelet, who flew to the affected area, said: "We don't know how the situation is going to evolve. It's pretty unpredictable."

Massive ash clouds belched into the sky, forced airlines to cancel flights and drifted as far away as southern Argentina -- including the picturesque ski resort of Bariloche, which warned people to stay home to avoid inhaling dust particles.

There were no immediate reports of injuries. A 21-year-old mountain climber was initially reported missing, but later turned up alive.

The first eruption, which started around 6:00 pm (2100 GMT) Wednesday and lasted about 90 minutes, spewed a giant mushroom cloud of ash 10 kilometers into the sky, which turned hues of pink and yellow as the sun set over the area.

Seven hours later, Calbuco erupted again, this time shooting lava into the air and generating volcanic lightning, a phenomenon researchers believe is caused by the emission of large amounts of molten rock and ash charged with static electricity.

People who saw the spectacle of the earth roaring were dumbfounded.

"I came to Chile as a tourist for three months but I did not expect this. The eruption was unbelievable. The Calbuco show was worth the price of admission," said Cody Fritz, a 30-year-old US traveler.

Bluish-white bolts of lightning cut through the red and orange plumes of lava in a stunning display of nature's power that played out against the backdrop of the night sky.

Volcanic ash blanketed the area -- nearly a meter (three feet) high in some spots, causing the roofs of some houses to cave in.

Road workers used heavy trucks to plow a path through the ash, as residents shoveled it off their rooftops.

"The ash might damage crops, animal feed, bridges, roads, people's work routines, tourism and especially their health," Bachelet said, calling on residents to wear protective masks, which authorities were handing out in both Chile and Argentina.

Until minutes before the first blast, volcano eruption monitoring systems had picked up nothing. In fact, volcano watchers in Chile had been warily keeping an eye on another volcano, Villarrica.

But some experts said it should not have been a surprise.

"The volcano wasn't at all dormant. It was active and alive," with regular emissions of gas and smoke, said Florent Brenguier, a seismologist at the University of Grenoble in France.

"A period of 50 years between eruptions is very short in the life of a volcano," she said, adding that the latest volcanic activity could last days or weeks.

Some in the area reacted with panic. Others were fascinated.

"The explosion caused immediate hysteria among residents. We couldn't believe what we were seeing," said Marcia Claro, the owner of a cafeteria in Puerto Varas, a town of 38,000 people on the shores of Lake Llanquihue, at the foot of the volcano.

The mayor of nearby Puerto Montt, a tourist gateway to the popular Patagonia region, said residents were "very, very frightened," amid warnings that melting snow and ice could flood rivers.

But another local, Alvaro Ascencio, said people were "more excited than afraid," flocking to the lake to take pictures.

The region, Los Lagos, is popular with tourists, with beautiful mountain landscapes dotted with volcanoes and lakes with beaches of black sand.

It is the second eruption in Chile since March 3, when Villarrica emitted a brief but fiery burst of ash and lava.

Chile has about 90 active volcanoes.

Geologist Alfredo Lahsen of the University of Chile said the long, narrow country, the world's largest copper producer, should look on the bright side of its turbulent geology.

"If we didn't have volcanoes, we wouldn't have the rich gold and copper mining activity that we have in Chile. You have to see the positives too," he told radio station Cooperativa de Santiago.