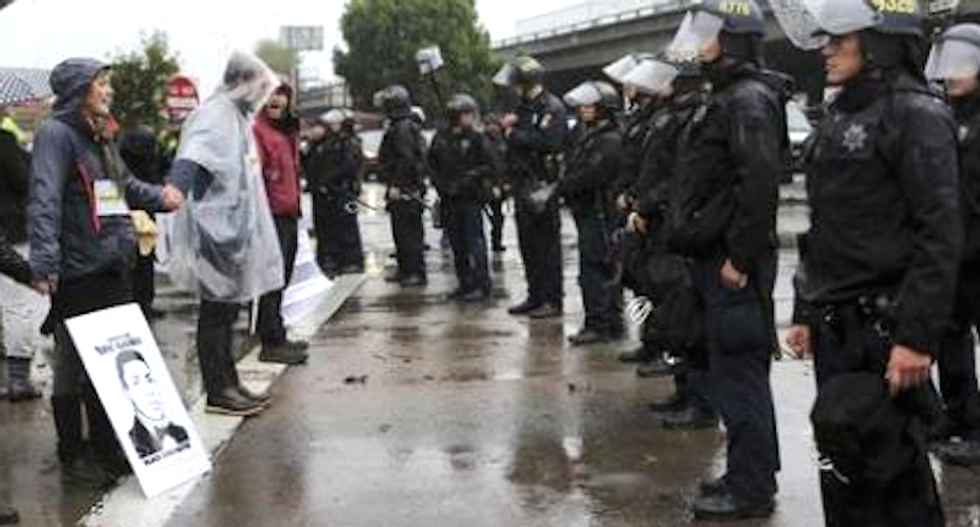 Demonstrators face off with police while blocking doors to the Oakland Police Department to protest against killings of unarmed black men by police officers in Oakland, California December 15, 2014. (REUTERS/Robert Galbraith)

The California city of Oakland has failed to discipline problem police officers "time and again," an investigator appointed by a U.S. federal judge said on Thursday in a court filing, as police tactics draw greater scrutiny across the United States.

Police reform advocates see the disciplining of problem officers as a key tool to cement community trust, which has taken on added importance after national protests sparked by police killings in Ferguson, Missouri and New York City.

The Oakland investigation started after an arbitrator reinstated a police officer criticized for firing tear gas during Occupy protests in 2011. That followed a series of cases in which arbitrators had overruled similar disciplinary actions.

In a report on Thursday, investigator Edward Swanson said Oakland's city attorney frequently lost such arbitrations because the office handled cases "haphazardly, often waiting until the last minute to prepare for hearings or to assign cases to outside counsel."

Swanson interviewed several witnesses who expressed concerns that Oakland's city attorney may have chosen outside lawyers, based on campaign contributions.

However, from Swanson's review of documents, the filing said, "We did not find that it hired outside counsel for police discipline cases based on pay-to-play."

Oakland is committed to working with the court to achieve the mutual goal of constitutional policing, including a fair and effective disciplinary process to hold officers accountable for violations, city attorney Barbara Parker said in a statement.

"We agree with many of the investigator's recommendations, a number of which we implemented or addressed prior to the Court's investigation," Parker added.

Oakland police have been under court oversight since 2003, when the city agreed to reforms to settle a civil rights lawsuit.

In ordering the Swanson investigation this year, U.S. District Judge Thelton Henderson wrote, "Imposition of discipline is meaningless if it is not final."

Oakland's handling of police discipline had eroded the faith of many, Swanson said.

"A broken discipline process means bad officers remain on the force – a clear threat to public safety," he said in his report. "It also means good officers lose faith in the process. And it erodes the public's trust in local law enforcement."