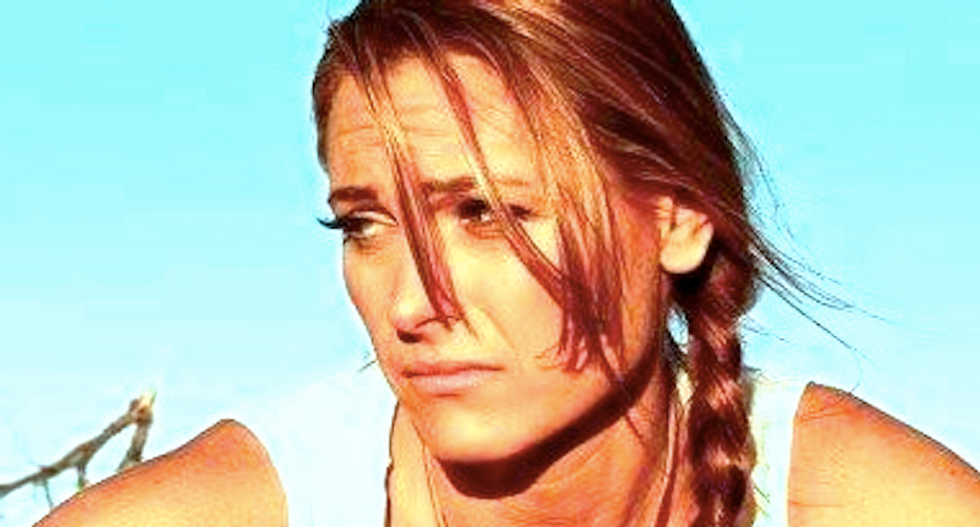 A Georgia woman who stopped protesters from “desecrating” the American flag last week apparently doesn’t mind mistreating the flag herself on a photographer’s orders.

Video recorded Friday at Valdosta State shows Michelle Manhart scuffling with police and protesters who were trampling a flag.

She was not charged, but Manhart was barred from campus activities.

Manhart explained to Fox News that she stopped the student demonstrators from disrespecting “an iconic symbol of freedom.”

“If you are going to fight for a cause and use the First Amendment -- how are you going to stomp and trample the icon that gives you that right?” she said.

Manhart quit the Air Force in 2008 rather than accept a demotion for violating the standards expected of military personnel after posing nude for Playboy while draped in an American flag.

The photos show a fully nude Manhart covering her nipples with her arms, while a folded American flag she is holding covers the lower portions of her body and unfurls onto the ground.

“The flag should never touch anything beneath it, such as the ground, the floor, water, or merchandise,” states the U.S. Flag Code.

The Flag Code also prohibits wearing the flag as clothing, and the photo shoot apparently violates a prohibition against drawing up the flag up into folds.

Manhart later posed nude for a PETA campaign holding small flags in front of her breasts.

Watch the video below, uploaded to YouTube by ReformedMediadotNet: