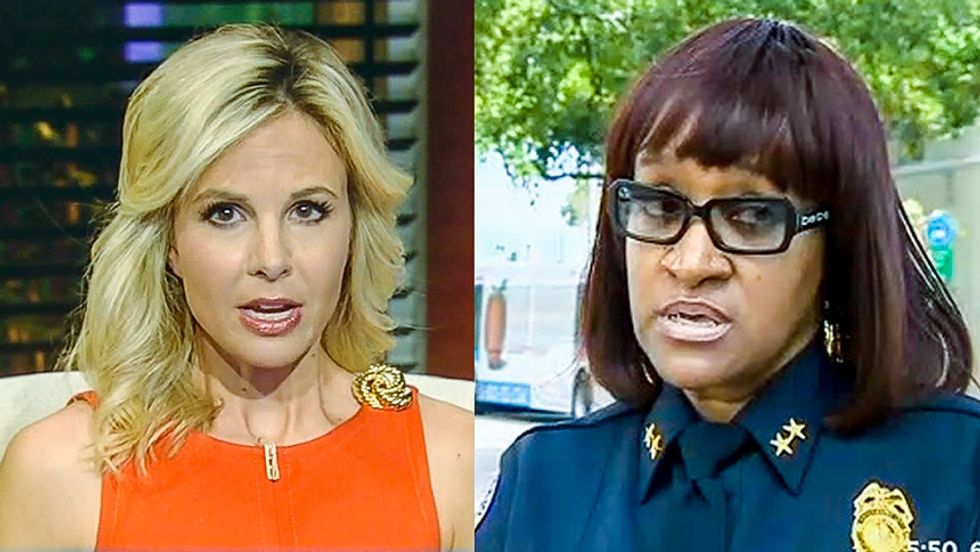 Elisabeth Hasselbeck and the hosts of Fox & Friends suggested on Monday that they had a "right to know" if the first black woman to be appointed Assistant Chief of Police in Miami was a Muslim who hated America because she stood at attention during the Pledge of Allegiance instead of placing her hand over her heart.

In a letter last week, Miami Fraternal Order of Police President Sgt. Javier Ortiz demanded that Assistant Chief Anita Najiy be reprimanded and removed from her position as honor guard commander. According to Ortiz, Najiy did not place her hand over her heart during the Pledge of Allegiance "to make a political statement."

Ortiz posted a video of Najiy on the police union's YouTube channel, which showed her standing at attention as other officers placed their hands over their hearts.

However, Police Maj. Delrish Moss told The Miami Herald that Najiy was simply following military protocol, which states that one should "stand at attention, remain silent, and face the flag" when reciting the Pledge of Allegiance indoors.

But on Monday, the hosts of Fox & Friends suspected that there could be something more nefarious going on.

"The fraternal order of police president has suggested this could have been a religious decision," Fox News host Steve Doocy noted. "He has suggested that perhaps she is a Muslim. That is not known."

"If you're a Muslim, I hope it still means you can salute the flag!" co-host Brian Kilmeade exclaimed.

"You know, that would be a great question to ask," Elisabeth Hasselbeck agreed. "And so is it our right to know why someone would opt-out of that? How does that make you feel if that is indeed your district? Would you want to know?"

Kilmeade offered a possible defense for Najiy, saying that he sometimes had "absence of mind" when he was supposed to appear reverent in church.

"I remember walking up a few times with my hands in my pockets instead of my hands crossed, not thinking," he said. "So, I don't know what I was thinking. And a lot of people were like, 'Do you know you had your hands in your pockets?' And I said, 'No! I didn't realize that.'"

"I think that she has done this on more than one occasion," Doocy pointed out. "And that's why the Fraternal Order of Police president was taking a picture of her doing that to say, look, she does it all the time."

Watch the Black History Month profile below from CBS Miami.