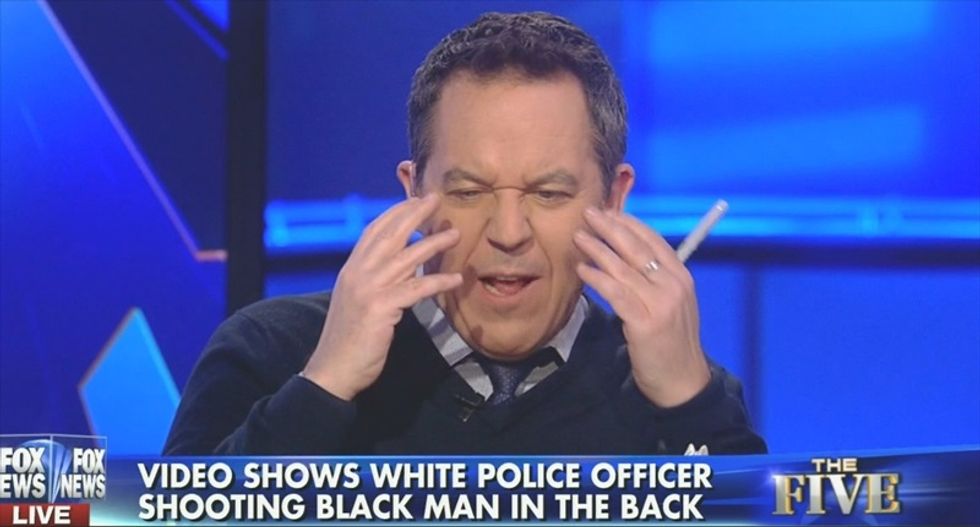 While criticizing the fatal shooting of 50-year-old Walter Scott in South Carolina on Wednesday, Fox News host Greg Gutfeld struggled to see what was right in front of his eyes -- a white police officer shooting a black suspect.

"This is the great thing about that horrible, horrible tape, and why it's necessary that cameras are everywhere: I didn't see a black man killed by a white cop; I saw a man shoot another man in the back," he said. "I saw an actual act. You can't theorize, you can't come up with hypotheticals. You actually see that."

Gutfeld's remarks downplayed the issue of race in the shooting, but data from KilledByPolice.net indicates that police killed at least 238 black Americans last year alone, more than the number of black fatalities caused by the 9/11 attacks in 2001.

As Reuters reported, footage shows Scott running away from Officer Michael Slager following a traffic stop in North Charleston when Slager fires his weapon at Slager. The video, taken by a bystander, also shows Slager approach Scott after shooting him eight times, then handcuff him.

Slager originally claimed that he got into an altercation with Scott, a former Coast Guard member, and that Scott took his Taser, forcing him to open fire. Slager also appears to place the Taser near Scott after shooting him. Agence France-Presse reported that besides being charged with murder over the shooting, Slager was fired from the department.

"Unlike talking heads like us or activists, the camera sees more than color," Gutfeld said on Wednesday. "The camera captures the actual incident -- an incident that in my view, cannot be justified. What I saw there, it's just unbelievable [that] you would shoot somebody as they're moving away from you and then supposedly, perhaps, planting evidence to make it look like you were justified."

He then admitted to being wrong about requiring officers to wear body cameras, before contributor Juan Williams asked, "What would you say about Staten Island, Eric Garner?"

"I felt horrible about that," Gutfeld responded. "That camera showed a man that was being arrested over a loose cigarette."

"I'm saying, there was a camera," Williams continued. "And the police officers were not indicted by the grand jury. But in this case there was camera. I will say that sometimes, you don't know the beginning before the camera's turned on, you don't see everything. But in this case, I wonder what would have happened if there's not a camera."