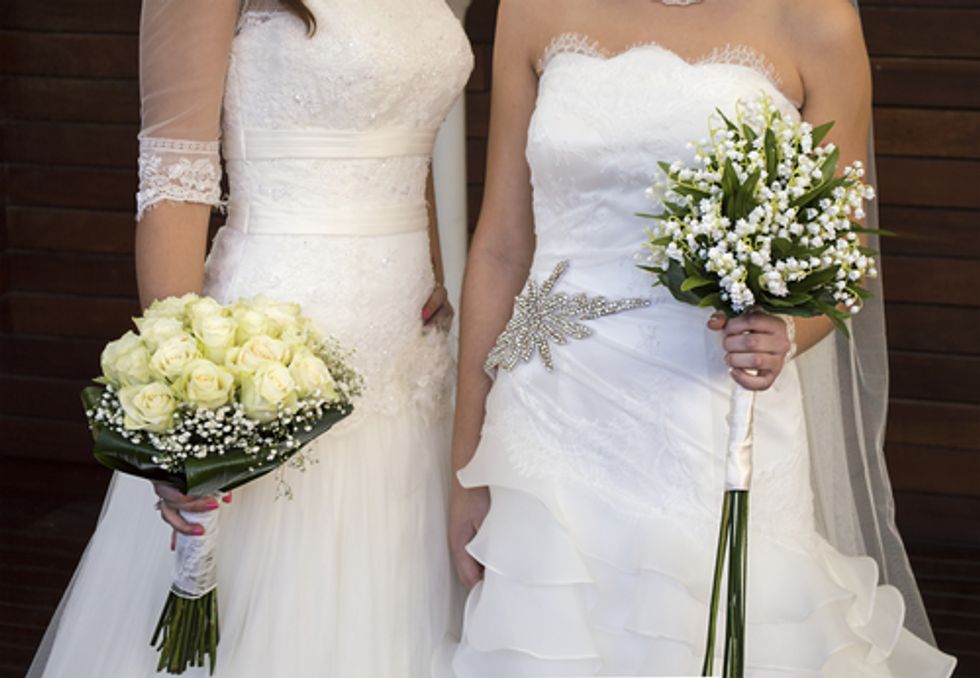 Sorry, not buying that this leads to abortion.

Hat tip to Raw Story's David Edwards for finding this article at the Heritage Foundation's news site called the Daily Signal, that argues that gay marriage is going to increase the abortion rate. It's written by Gene Schaerr, who lost the case defending Utah's ban on same-sex marriage, and it really demonstrates the bizarre leaps homobigots have to go to in order to create "secular" justifications for their religion-based hostility to same-sex marriage. No wonder they keep losing, even with judges that might have been open to their arguments before they actually heard them. Just marvel at this:

I'm tempted to leave that there with this gif:

But fuck it, let's dig in, shall we? Because this perfectly encapsulates how much misogyny and homophobia are intertwined. He elaborates:

As the amicus brief explains in detail, redefining marriage in genderless terms—which is legally necessary to permit marriage by same-sex couples—undermines the existing social norms of marriage in ways that are likely over time to reduce opposite-sex marriage rates. For example, an “any-two-adults” model of marriage implicitly tells men (and women) that a child doesn’t need a father (or mother), thereby weakening the norm of gender-diverse parenting.  Other norms, such as the value of biological bonding, partner exclusivity, and reproductive postponement until marriage, will likewise crumble.

It all comes back to this idea of women having unauthorized sex, doesn't it? In fact, as I've often argued before, the word "abortion" isn't used by conservatives to mean termination of a pregnancy so much as it's just the code word for "women having unauthorized sex". You can see it all over this: The real concern isn't abortions per se, but women feeling like they're living in a freer time and therefore can do what they want.

How do I know the real fear is female sexuality and not grief over the death of embryos? Easy: Because the overwhelming evidence shows that sexual liberation, particularly for women, leads to a lower abortion rate.

Take, for instance, Schaerr trying to raise the alarm over how same-sex marriage supposedly forced a drop in overall marriage rates in the Netherlands, using this distorted chart:

In the Netherlands, for example, among young women, and after controlling for other factors, there was a net 5 percent reduction in the nationwide opposite-sex marriage rate, and a 31.8 percent plunge in urban, less religious areas. As shown in the graph below, moreover, in just a few years after it redefined marriage Spain saw man-woman marriage rates plummet 36 percent.

Maybe. The more likely explanations that the marriage rates in Europe overall have been, like in the U.S., in a dramatic downward dip and the adoption of same-sex marriage just happened to fall in the middle of it. Imagine, if you will, that I decided to train for a marathon. After 3 months of building up my distance, I spent one swimming instead of running. Then, a month later, I ran the marathon. (Guessing here. I have no idea what it takes to train for a marathon.) This would be like saying the swimming day was responsible, because it really happened right before a dramatic explosion in my distance running abilities.

Dana Milbank makes a similar point, pointing out that states with same-sex marriage bans have lower marriage rates than ones that have legal same-sex marriage. There's not any actual reason to speculate wildly about why marriage rates generally are declining. Some of it is economic, but the long term trends suggest that as women get jobs and access to contraception, they can choose to be pickier and wait longer. Which is a good thing.

But back to the abortion thing. What Schaerr neglects to mention is that a nation like the Netherlands, which has a lot of the sexual liberation he finds so scary, also has a low abortion rate because of said sexual liberation. Contraception education is good there, access is easy, and teenagers are allowed to be sexually active without parents shitting the bed over it. Because of this, people use more contraception, thus fewer abortions. Even in the U.S., you see this trend. Yes, marriage rates are going down, but so are abortion rates, because contraception is becoming more widely available.

I don't necessarily disagree that there's a connection between same-sex marriage and increasingly liberal attitudes about sexuality. But that relationship isn't causal. Or, if it is, it's causal the other way around:  As more and more people buy into the idea that sexual relationships are about personal happiness instead of begrudging duty, it becomes harder to deny same-sex couples the right to define their own relationships for themselves.

But regardless of what causes what, we do know that these sexually free attitudes lead generally to a lower abortion rate. So if your actual concern is embryonic life, you should want it all: Free contraception, same-sex marriage, sexual freedom for everyone. But if what you mean by "abortion" is "people having sex I don't like for whatever reason", then yes, I can see why you'd be down on same-sex marriage.