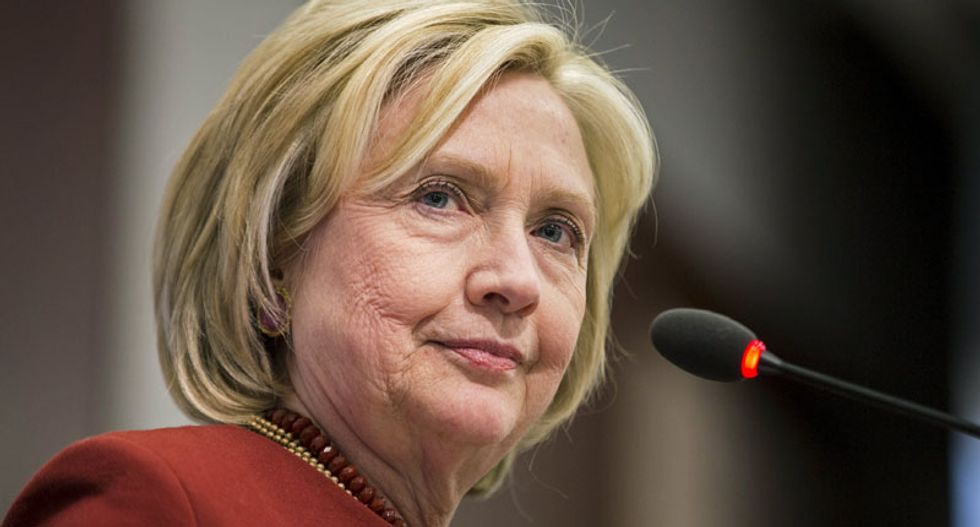 Former U.S. Secretary of State Hillary Clinton delivers remarks during the 2015 Toner Prize for Excellence in Political Reporting award in Washington in this file photo taken on March 23, 2015. REUTERS/Joshua Roberts

Hillary Clinton, under pressure from the left wing of her Democratic Party to aggressively campaign against income inequality, voiced concern about the hefty paychecks of some corporate executives in an email to supporters.

Striking a populist note, Clinton, who announced on Sunday she was running for president in 2016, said American families were still facing financial hardship at a time "when the average CEO makes about 300 times what the average worker makes."

In a tightly scripted campaign launch in which there were few surprises, the comments were unexpected, at least by progressives, who saw them as an early sign she may shift away from the centrist economic policies pursued by her husband, former President Bill Clinton.

In the social media blitz that kicked off her campaign, Clinton, the prohibitive frontrunner to become the Democratic nominee, expressed concerns about economic inequality.

“I definitely see the push from the left wing, which I think is great,” said Jared Milrad, a Clinton supporter who appeared in a video launching her campaign for the presidency.

Milrad said he saw the populist rhetoric as a sign that Clinton "has been listening" to backers such as himself who want her to embrace some of the economic policies pushed by Senator Elizabeth Warren, a hero of liberal Democrats. Warren favors tighter regulation of big banks and a bolstering of the social safety net.

While progressives applauded Clinton's comments, the enthusiasm of some was tempered by the fact that they have yet to see the details of Clinton's policy proposals.

“So far we don’t know very much,” Zephyr Teachout, a one-time New York gubernatorial candidate, said on a PCCC-organized conference call on Sunday. “I hope Clinton clarifies where she stands on these issues.”

Leo Gerard, international president for the United Steelworkers union, was also guarded about whether Clinton's rhetoric will portend a more liberal economic agenda.

"I think it's too early to make any judgments on what I would call the very short opening statement, and we'll see what happens as we go forward," Gerard told reporters at a conference of the BlueGreen Alliance, a coalition of large labor unions and environmental groups.

The gap between the pay of chief executives from major corporations has skyrocketed over the past several decades. In 1965, CEOs earned about 20 times what a typical worker brought home, according to research by the Economic Policy Institute, a liberal think tank. In 2013, CEO compensation was nearly 300 times the pay of the average worker, the EPI study said.

Economic inequality has been a top campaign theme for Democrats for the past several years, including for President Barack Obama.

While Obama often talks about the need to address economic inequality, he is frequently cautious about appearing to lash out at corporations and their executives.

In 2009, for example, he bashed "fat cat" Wall Street bankers for accepting big pay packages in the aftermath of the 2007-2009 financial crisis at a time when many Americans were suffering hardship.

Faced with a barrage of criticism from Republicans who accused him of stirring class warfare, Obama softened his tone and sought to emphasize that he was not anti-business.

Obama's efforts to walk a fine line on economic populism highlight the balancing act that Clinton will face. While such rhetoric stirs enthusiasm among her supporters on the left, she risks irking wealthy donors, including her backers on Wall Street.

The first Jewish senator in Georgia history, Jon Ossoff, was sworn in on Jan. 20, on what his office described in a tweet as a “Hebrew scripture that belonged to historic Atlanta Rabbi Jacob Rothschild."

It left many wondering what exactly the Hebrew scripture meant, and what the relevance was of using this particular copy.